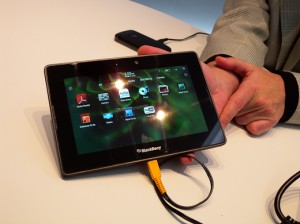 Las Vegas –  Scouring the gargantuan show floor  the Consumer and Electronic Show (CES), one quickly realizes that this year’s show skewed heavily towards  the next generation of tablets and smartphones.

HDTVs may be getting bigger, thinner and cheaper and 4G wireless networks (WiMAX or LTE) are promising “up to 10 times faster” download speeds compared to 3G data, all of this is great news, no doubt but somehow not as exciting as the developments and launches in the tablet and smartphone space. 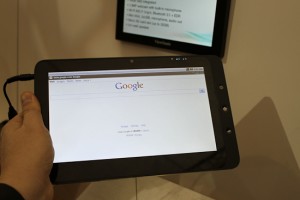 Viewsonic's Viewpad came in 7-inch and 10-inch (above) iterations

Almost a  year after it was announced, Apple’s iPad now has some valid competition and it is interesting to see that companies like Motorola Mobility and Research in Motion weren’t simply content in following Apple’s footsteps but are now trying to leapfrog the popular tablet in specs and features. 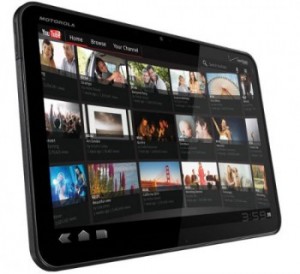 Motorola’s Xoom, for example, is the first tablet to feature Android’s tablet-specific Honeycomb operating system but has a dual-core processor and three times the RAM of the iPad.

We also had a chance to see RIM’s impressive PlayBook tablet as well which is a more business oriented but extremely impressive in form and function.

The newly announced Motorola Mobility, a company formed to focus heavily on smartphones and tablet devices, got things going by unveiling not just the Motorola Xoom but also a slew of notable new smartphones of which the Motorola Atrix was the highlight.

The Motorola Atrix, which is coming to Bell in Q1 of 2011, is the most powerful smartphone in the market today.

How powerful? The Atrix has a 1GHz dual-core processor with 1GB of RAM, specs that  surpass some entry level notebooks and netbooks sold last year. The Atrix is also the most powerful Android smartphone, eclipsing even Google’s own Nexus S (a rebadged Samsung Galaxy running stock Android 2.3) which has been confirmed to be coming to Canada although pricing and carrier information was not disclosed.

Add the super high-resolution 4-inch screen and all the smarts of the latest Android OS and this device is the closest thing to a pocket computer. 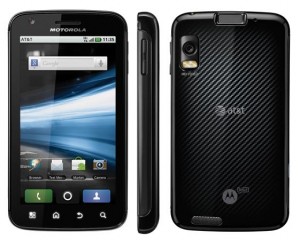 Motorola Mobility offers a notebook dock, composed of a screen and QWERTY keyboard that can be powered by the Atrix using a makeshift browser operating system.

There are also options that can make the Atrix function as a desktop computer when connected to external keyboard, monitors and mice.

Sony Ericsson, LG and HTC had similarly strong product launches and what they had in common were Android OS, large 4-inch and larger screens as well as the latest mobile processors. 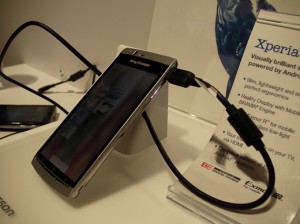 Sony Ericsson’s Xperia Arc  (above) is the slimmest smartphone we’ve seen at 8.7mm at its thinnest part and it comes with an amazing 4.2-inch screen that uses derivative technology from Sony’s own BRAVIA line plus an 8 megapixel camera.

LG’s big reveal was the Optimus 2X, which is powered by NVIDIA’s Tegra 2 dual-processor chip humming at 1GHz, another 8 megapixel camera capable of HD video capture and streaming plus an HDMI port to connect it to HDTVs.

Many of these smartphones and tablets will make their way into Canada within the first half of 2011. Throw in increased competition among the carriers  and the mobile scene looks to be a very interesting place in the coming year.

The Splinternet and its Impact on the Future of Online Advertising