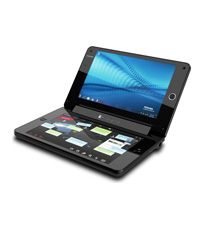 Today’s options for subportable computing are netbooks, whose biggest features are QWERTY keyboards on a small footprint or tablets which offer optimal portability and connectivity, Toshiba’s Libretto W100 is a hybrid of both and we take it for a spin.

The Toshiba Libretto W100 is a unique subportable computer. It is neither a netbook or a tablet yet it combines aspects of both devices to create one of the most daring and intriguing form factors we’ve seen on a production device. This is a dual-screen subnotebook that is capable of running Windows 7 without missing a beat. It also incorporates a software keyboard for users who want a more traditional input method.

Sporting a camera, connectivity through Wi-Fi and Bluetooth as well as being no bigger than a pocketbook, the Toshiba Libretto W100 is geared towards users who demand the most portable yet functional devices.

Toshiba’s Libretto line has always been about creating the smallest possible subnotebooks that are still functional despite their tiny sizes. The thing is, Toshiba’s Libretto’s have always had the guts and features of full sized notebooks in tiny enclosures but always with a screen and a QWERTY keyboard. 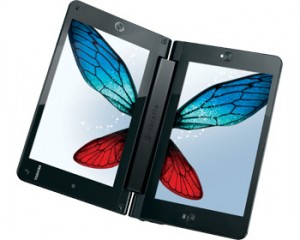 Designed to commemorate 25 years of Toshiba laptops, the Libretto W100 subnotebook (now on sale for $900) chucks conventional thinking out the window and offers dual-touchscreens in a form factor that makes it more like an actual book with two screens on each side.

It is about the size and thickness of a pocketbook when closed and Toshiba even includes a neat case that serves as a great way to stash the notebook in your library.

Once you get over the coolness factor as well as the novelty of the Toshiba W100’s size, you get even more surprised with the notebook’s specs.

Running Windows 7 Home Premium on a device this small is no joke but the Intel Pentium U5400 processor (1.2GHz) and 2GB of RAM manage quite nicely.

A 64GB  super fast mSATA SSD is sufficiently large storage space for a device of this size. You also get a 1 megapixel web camera and Bluetooth plus basic Wi-FI for connectivity.

There are surprising omissions, however. A device of this size could benefit from a WWAN card or a SIM card slot for possible on-the-go data. We also liked the idea of two-full touchscreens, but some sort of additional navigational tool like a nub or a trackpad would have been appreciated.

With the Toshiba Libretto W100, you have the option of viewing content on one screen while the lower screen serves as a the QWERTY keyboard or desktop space or you can use both screens for the same document.

This seems to work best when reading websites and it is kind of neat to see websites flow from one screen to the other.

You can also turn the Libretto on its side and make it mimic an actual book with both screens serving as pages. A neat idea in theory but not so much in practice.

While this  is certainly interesting and a number of apps seem to support this orientation, it does not feel natural.

For one thing, the screens are pretty reflective and shiny so getting the right reading angle can be challenging outdoors. The Libretto also runs hot and the rear of the top screen is where all the internals are so you are holding a pretty toasty book. 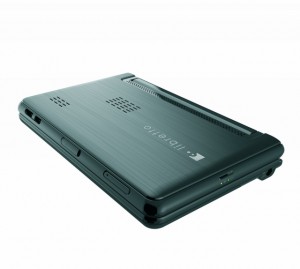 Then there’s the battery life, which, while rated at 4 hours with the included extended battery, we managed roughly 3.5 hours with Wi-Fi on and screen brightness set to low. This is just not acceptable for a subportable device that’s meant to be used on-the-go.

Not when we have $500 tablets that can grind out 10 hours of battery life on a larger screen.

The problem here is not all Toshiba’s, sure the two touchscreens are probably battery hogs but the real pig is Windows 7.

This is desktop and notebook OS that’s just not optimized for small devices or day-long tablets.

It isn’t for everyone but those who can live with its misgivings and quirks will enjoy its portability and flexibility. The thing is, it is expensive and is neither a tablet or a netbook but a little bit of both and it is truly one of the most interesting and enigmatic devices we’ve ever had the chance to review.

TELUS Facebook TV – Is the ‘Next Frontier of Social Networking’ Really a Repeat?