Each time a question was asked – ‘Do you use a cell or smartphone?’  ‘Are you on Facebook?’ ‘Do you text a lot?’  – almost all the hands went up

So the surprise was this was a room full of silver seniors – folks beyond the 60s in terms of years of age, but like twenty something in terms of use of technology! 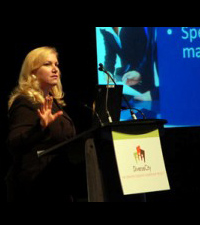 Gathered for activities and events in the Silver Screens Arts Festival at Ryerson University in Toronto, they joined in an interactive session called “Demystifying Technology”, led by Dr. Wendy Cukier, author, academic, activist and Information Technology Management professor at Ryerson.

Dr. Cukier is an expert in many fields, including emerging technologies and diversity, and she could tell right away that much of her prepared remarks could be abandoned in favour of a more free flowing discussion, based on the casual tech survey she conducted, and the responses offered.

The hands-on familiarity most in the audience had surprised her, and everyone agreed it was a somewhat unusual sampling and not necessarily true across the board.

Many outside the silver community think that seniors are out of the loop when it comes to technology. And while it’s true that a smaller proportion of older Canadians use computers or the Internet than those from other age groups, seniors have begun to embrace technology in ever greater numbers. Surveys show that the use of social networks among Internet users aged 50 and older has nearly doubled in about a year, according to the Pew Internet Project.

So while younger users may be heavier users, the real growth rate is among seniors – a fact many seniors say that technology marketers and Internet ad managers should really consider more closely.

These are pretty tech savvy seniors, and everyone in the room raised their hands as computer users and e-mailers, with maybe 60 or 70 per cent of them on Facebook, and about the same having used iPhones, digital cameras or video camcorders.

By far, the motivation for all this techno-infatuation is communication; to stay in touch with friends and family. One woman said tools like BlackBerry and Facebook were “invaluable” when trying to co-ordinate family activities, and get everybody in one place at one time.  Another said she specifically wanted “to learn how to use the gadgets my kids and grandkids are using, just to stay in touch.”

Online banking and shopping experiences were common, and for the most part favourable, although one gentleman bemoaned the lack of a “paper trail and losing stuff.”

Questions arose about privacy settings on Facebook, and most agreed that even with specific examples, the settings were confusing enough even without all the recent changes.  One person said they had quit Facebook over such concerns, but it was pointed out that one never can quit, rather account activity is ‘deactivated’.

Dr. Cukier was glad the questions came up, saying from her experience young people were “oblivious to privacy considerations.” 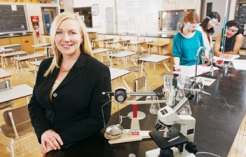 No one acknowledged using Twitter, however – a fact Dr. Cukier noted with some relief as she smilingly discounted most of the tweeting going on, shaking her head “What a waste…”

As it happens, she’s involved in a study that seeks to measure the effectiveness of social media, and she’s long been interested in the way people think and talk about technology, having spent time analyzing discourse about e-learning, e-commerce, digital media, social marketing and public policy.

So, while noting that some well funded and highly structured users – like the Obama Presidential campaign – can be quite effective, Cukier feels many organizations are being oversold on the promise and relevance of online social media networks. “They provide an additional medium of communication, (best used when) complementing face-to-face interaction, phone and e-mail,” she noted.

If there was one solid bit of tech advice she wanted her tech using audience to take away, it was a sense of critical skepticism. “It’s not that things are better or worse, just different. There can be trade-offs with what you are accustomed to.”

On that ‘getting accustomed to technology’ theme, Dr. Cukier noted that an upcoming silver session for seniors was being planned with several workstations and digital gadgetry available for intensive hands-on, with interested parties following up “by e-mail is best.”

Wendy Cukier is the co-author of Innovation Nation: From Java to Jurassic Park (Wiley, 2002) and The Global Small Arms Epidemic: From Saturday Night Specials to AK-47s (Praeger, 2005).