Is it the same for men and women? 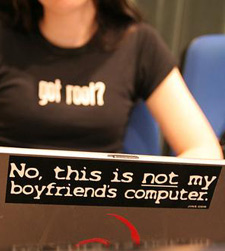 Women are under-represented in the high tech industry.

But recent studies show a potentially worrisome imbalance, however, with the uneven distribution of opportunities and challenges to men and women working in, or seeking entry to, the high tech industry.

As one of several industry initiatives to address the issue, and to provide industry advice and professional mentoring, the Canadian Women in Communications (CWC) and Toronto-based Digital Theory Media are launching the second installment of the Digital Convergence Executive Series, with all-new full day courses taking place in the fall of 2011.

The series launches in Toronto on September 29th with Leading the Future 3.0: Executive Strategies for the Digital Age.

Her own story is one of inspiration and success in the business.

Having worked for several years as a top executive in the country’s television and media industry, she made the gutsy move to leave her high-profile career to launch her own company, and pursue her dream of helping people reach their personal and professional goals – without sacrificing their quality of life.

Less than a year later, she was named “Mentor of the Year” by the CWC, and she began making regular appearances on TV as a guest coach for CBC’s national daytime talk show, “The Gill Deacon Show”.

Janet holds a Bachelor’s degree in Radio and Television Arts and is a graduate of the Promax Marketing Masters course at Harvard University.  Now, she’s President at Two Red Chairs Executive Coaching, and gearing up for the new series of seminars.

The Digital Convergence Executive Series was developed to deliver specialized learning to TMT leaders as they reposition their organizations to exploit convergence.

“The TMT sectors are key drivers of Canada’s digital economy,” Stephanie MacKendrick, President of Canadian Women in Communications, noted. “We aim to provide executives with expanded skills to build profitable digital ventures as well as opportunities to collaborate across converging industries. Digital Theory is a natural partner for this project. They have a proven track record of designing highly effective learning that combines top digital intelligence with smart corporate strategy.”

Curriculum for the Program is overseen by an Advisory Committee of leading executives and academics, working to ensure that the content is both leading-edge and practical in today’s marketplace.

Canadian Women in Communications (CWC) is a national, not-for-profit business organization dedicated to the advancement of women in the converged communications industry through strategic networking, targeted professional development and meaningful recognition. There are currently over 1,200 CWC members across Canada.