The number and scale of online privacy breaches continues to increase: industry experts say more than half of all organizations will be forced – forced by circumstance – to update their privacy policies before 2012 is over. 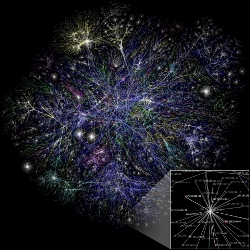 All the human and technical connections that make up the Internet, as shown in this 'map', make the Web more vulnerable.

But there’s a crack in the darkness, and some daylight this year from a contest among top competitors to develop technology that protects privacy, rather than threatening it.

There was a tie in the 2011 Award for Outstanding Research in Privacy Enhancing Technologies (the so-called PET Award), presented recently in Waterloo, ON.

So two areas of online privacy research were honoured by the Ontario Information and Privacy Commissioner’s Office and Microsoft, not just one.

The first winner is into the protection of genetic information – the stuff of you and me, and a leading edge topic on the frontier of privacy research.  The other winner is looking into attacks that exploit online advertising – another fibre of our being, it seems.

These are much more than academic awards, however.  Just a week after one award winning researcher notified Facebook about such attacks, the social net made significant changes to its online systems.

In her winning project,  Aleksandra Korolova wrote about a new class of attack that exploits online advertising delivery; those that offer ‘customized’ or ‘targeted’ ads supposedly with more relevance, but apparently with more risk, as well. Korolova says such micro-targeting opens the door to user privacy breaches.

She notes that the Internet is a complex network of both machines and people, and so problems require solutions from both algorithms and the social sciences. She’s active with a group called RAIN (Research on Algorithms and Incentives in Networks) where intriguing discussions on these topics take place.

The other award winner was a team of researchers who wrote about the protection of genetic information,  and the basic conflict between the requirements of genomic research and privacy

The authors, including R. Wang, Y. Li, X. Wang, H. Tang and X. Zhou, showed that someone with an individual’s genetic information could determine (with high probability) that the individual was part of a Genome-based disease study, based on statistical information commonly released during those studies. 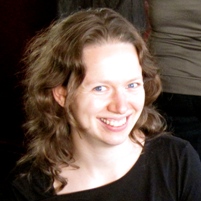 A global panel of leading technology researchers selects winners of the award, first presented in 2003.

“With emerging technologies growing rapidly in every area of our lives, leading edge research into privacy is necessary to protect everyone’s personal information,” Dr. Cavoukian said when presenting the awards. “I applaud the winners on their remarkable achievement and innovation.”

The PET Award includes a $3000 USD prize, thanks to Microsoft, and a nice statue from the Information and Privacy Commissioner of Ontario.

The power of community – a personal defining moment