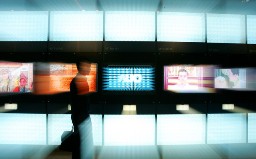 Technological developments like these, being applied in what’s known as ‘digital out-of-home’ advertising industry, are bringing amazing new abilities to track and measure the audience, to trigger and enhance client interactivity, and to find and identify new customers.

The industry is obviously embracing these capabilities, as the ability to identify individual consumers and their shopping preferences can be very profitable.

Not surprisingly, some applications are raising concerns about personal privacy and consumer confidentiality.

“We’re in a world in where advertisers want a better analysis of their customers, what mood they’re in, what offers they are open and responsive to, in that moment, in that place,” says Dr Vicki Rabenou, known as the chief measurement officer at TruMedia, a leading developer of tracking and analysis technology.

It’s a similar idea to that developed at CognoVision, the Markham, ON-based company bought by Intel last year.

Called Anonymous Impression Metric (and now, the Intel AIM Suite) platform detects the number of viewers, determines their gender and age group, and measures dwell time. This data can be used in real-time to tailor on-screen content based on the demographics of current viewers

AIM has been designed to fully respect privacy and does not record any images or video footage, only generating anonymous statistical data.

The data is logged and the video destroyed on the fly – with nothing in the process recognizing the individuals who passed in front of the sensors.

Passers-by may not even have to look.

Those carrying cell-phones that are Bluetooth-enabled are being targeted and tracked, as well.

Proximity systems can continually monitor a business area, waiting for a new possible customer to approach. When detected, such systems can deliver text, images and videos that promote the business in the hopes of reeling in a new client.

Transmitters and boosters can extend the transmission range as far as 2000 metres; that is a big storefront!

Proximity marketers like iSIGN use Bluetooth enabled systems to reach out to consumers.

Real-time ad-serving, integrated QR codes and mobile apps are part of a new out of home digital signage set-up at Canadian Tire.

Installed as a 42-inch LCD touch screen, the system lets shoppers search and locate products, scan QR codes and get instant promotions sent to their smartphones.

The kiosk, developed by Toronto-based Jibestream Interactive Media, has a broad suite of software tools that support full customer tracking and reporting on retail activity and trends. 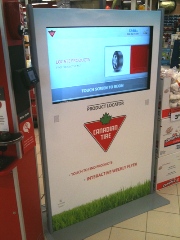 Canadian Tire is using digital kiosks to connect with shoppers and their cellphones.

Likewise some very powerful new facial recognition techniques are being applied at the retail and commercial level.

Presented recently at the SIGGRAPH graphics conference held in Vancouver, the University of Washington’s Ira Kemelmacher-Shlizerman described her developmental work on computational tools to enable capturing, modeling and rendering a person’s appearance and – more tellingly – behaviour from online photo collections.

Kemelmacher-Shlizerman also said she’s able to identify faces based on a nine-point computational algorithm, one that is not thrown off by severe camera angles, eyeglasses or facial hair.  She’s also working on a way to develop 3D images from a single, 2D picture.

More to the point, she also consults for Google.

Its Picasa face morphing program is based on her work, and it shows a small sample of what is possible in facial recognition and people tracking technology.

Facial recognition applications are not all commercial, and they can be very controversial.

For example, legal authorities are looking at facial recognition from two angles, as far as the recent Vancouver Stanley Cup riots are concerned. Police are using tools to identify possible criminal activities, while at the same time, the British Columbia information and privacy commissioner is investigating the Insurance Corporation of British Columbia’s (ICBC) use of facial recognition technology to ensure that it complies with privacy law.

In Ontario, facial recognition is a big part of the self-policing of gambling addicts. It is used to identify those who have signed up for remedial care is dealing with a gambling addiction.

With proper privacy controls and protective policies, Ontario’s Privacy Commissioner says such systems can be used to great benefit.

That’s if and when credible, transparent and well-communicated privacy standards are established before digital signage becomes a big screen problem.

So, whatsyourtech? Are you ready for your close-up?

Do facial recognition techniques and technologies cause you any concern?

Have you beeen ‘called’ by a proximity marketing system? Did you buy anything as a result?

The Evolution of Social Media… History will be Rewritten!

What to Expect from Apple iOS 5