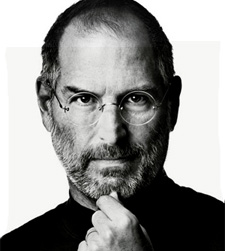 Apple has lost a visionary and creative genius, and the world has lost an amazing human being. Those of us who have been fortunate enough to know and work with Steve have lost a dear friend and an inspiring mentor. Steve leaves behind a company that only he could have built, and his spirit will forever be the foundation of Apple.

Jobs had been battling pancreatic cancer for some time, and had recently stepped down from his position with the company.

As his and his company’s impact on the world of personal computing, music listening, digital media and TV continues to be honoured, celebrated and analyzed, the impact on all our lives will continue to be felt for some time to come.

Jobs presented us with a new platform for life, one which depends less on where and when, and more on how and why.  He created a central hub for the digitally empowered lifestyle we find ourselves in the midst of today.

As co-founder of Apple back in 1976, his work triggered a revolution in tech innovation extending well beyond the walls of his company. Surely, the 1984 introduction of the Macintosh computer was quite literally a ‘breakthrough’ moment.

Then, new devices such as the iMac (1998), iPod (2001), iPhone (2007) and iPad (2010) fit his vision of excellence, accessibility and functionality for both users and a growing ecosystem of third party manufacturers and developers.

With the launch of the iTunes Music Store in 2003, he helped unleash a torrent of creative new distribution and delivery options with digital downloads of music, video and, in 2008, applications for smartphones and tablets. Very early on, he saw the Internet as the ultimate in direct distribution systems, a way for vendors to reach their customers in new and immediate ways.  Vendors might offer products, they might offer information.

“We are living with an explosion of digital devices,” he proclaimed several years ago, during one of those love-ins known as the MacWorld Conference.

It was the first one of a new millennium, actually, and Jobs and Apple were seeing the future rather clearly from that vantage point.

Apple would be, he predicted in San Francisco in early 2001, “the new digital hub with the ability to add tremendous value to other digital devices.”

Innovative products aside, it’s the industry he helped create that will be the most long lasting and valuable legacy. At the time, I wrote not just about Apple (and the new at the time Final Cut Pro V1), but also about a dozen or more companies here in Canada, each one developing accessory or ancillary products that would connect to that Apple hub.

Of course, Jobs was as engaged in creating content as he was in delivering it. His first investments in a company called The Graphics Group would lead to the creation of Pixar, and that in turn led to a new life for films – animated or otherwise – starting with Toy Story.

More than entertainment devices, Apple’s products are also important business tools, at home in both the front and back end of large and small businesses alike.

As word of his illness hung over the industry these past few months, and now with word of his passing, I’ve often thought back to that MacWorld Conference and the closest I ever got – or felt – to Steve Jobs.

I walked away from that event some ten years ago just shaking my head in amazement and anticipation. As much about people as products.

Jobs promised us all new ways to connect, create, acquire and deliver almost anything, anywhere, at any time!

It’s a cliché now. But that’s true of most visionary statements after a while.

So, thanks Steve.  Thank you for a new way to live as the killer app of the new millennium. 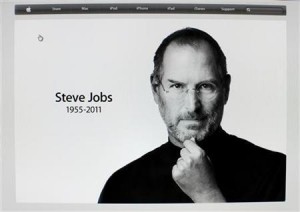