Makes perfect sense that a cab company would get mobile; maybe it’s surprising it took this long. 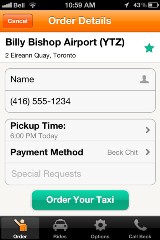 Some of the cab ordering options available in the new Beck Taxi iPhone app.

But there’s now a new iPhone app you can use to order a cab in Toronto; soon, there’ll be support for other smartphones and an online Web-based taxi ordering system, too.

Beck Taxi is Toronto’s first taxi company to introduce a dedicated taxi app; it’s easy to use and a cab can be ordered to your location with just two clicks.

But there are more plans for tech and taxi integration at Beck; the company is working with two of Toronto’s top creative houses and digital media agencies and they’re calling their plans ‘Beck 2.0’.

“We’re very excited to be the first taxi company in the city to offer an app which will ultimately make our customers’ lives easier,” said Kristine Hubbard, General Manager, Beck Taxi. “This is the first of several innovations that Toronto taxi users can expect to see from Beck that help simplify the taxi experience.”

A new iPhone app has Beck Taxi lined up to serve Toronto.

One of the simplest facts about the Beck app is that it is free (there is another taxi app that’s been around for a while; known as #TAXI, and it too was developed in Toronto. But it is a for-fee service which adds a buck or so per call. That service used a service provider’s database to get you the nearest cab, no matter the company. Montreal also has its own dedicated app, by the way, released by Diamond).

So the Beck app connects directly to the company’s own dispatch system, and sends out one of its more than 1,600 vehicles – it’s the largest cab company in the country – to your specified T.O. location with no extra charge.

And it is fast – saving a few seconds during a snow storm, being less obvious or intrusive during a business meeting, just being safe and secure on the way home after a night of partying are all good reasons to click for a cab.

It can locate you by GPS, along with a collection of local landmarks that may be nearby, and there’s also direct alpha-numeric entry and an in-app memory of sorts, which can recall some Preset, Favourite or Most Recent pick-up locations and travel destinations.

You can schedule a pick-up for a later time (up to 30 days in advance), and select other options. 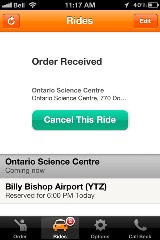 Calls for a cab can be confirmed on-screen in the new Beck Taxi app.

A nice feature of the app is that it will give you status updates that confirms your order and estimates when the cab you called is likely to arrive.

Seemingly just hours after the app itself arrived, it had risen to Number 16 on the iTunes Utilities chart, reported Shayna Haddon, a producer at the creative ad and production agency Gearshift, which worked on the app’s development together with its fellow design agency, OneMethod, also based in Toronto.

Beck has been a client at Gearshift for some time, and Haddon said the app’s development was a natural evolution of the conversations they’ve had and strategic marketing plans they’ve made.

Now, Gearshift is an award winning creative agency and media production company, with a sophisticated studio in downtown Toronto and offices in L.A.

Its client roster includes the likes of Porsche, Ritz Carleton, Sherritt International and more; the company’s founder, Jordan Barker is also a feature film director with an impressive portfolio of his own.

And co-development company OneMethod Digital + Design is active in the digital space, from social to mobile to content to Web to stuff that hasn’t even been named yet, as they say.

As creative as they are in the virtual realm, OneMethod is also known for its funky physical space, and an office that has its own creative reputation.

So is it a bit surprising, too, that a cab company has top agencies rep’ping it?

“Probably, yes,” acknowledges Haddon. “Most people would not likely think that cab companies need to work with high end agencies. They are one of our most unique clients, and one of our favourites, too.”

Recalling the company’s heritage (founded by Jim Beck in the 1960’s, the company has grown tremendously over the years, and it still remains a family run business. Daughter Gail Beck-Souter runs the company, and her own daughter is seen as the likely successor), Haddon laughs, “How many cab companies do you know that are run by a woman?

“Gail is a trail-blazer,” she says of the company’s leader and namesake. “She’s a tireless advocate for the company, and for the industry. Even with the success of her company, she clearly wants to play at a bigger level, and she has a great vision for how technology can help.

“Staying current with the trends was one reason for the app; so social network integration was a natural. But it was also important to stay ahead of the curve, and make sure someone else didn’t do it first.”

Nevertheless, Haddon says a lot of time was spent on the app, and especially in the testing phase.

Working with cab dispatchers, the app’s backend was integrated into existing radio dispatch systems and then a series of pre-tests were conducted using an offline server.

Following a few fine-tunes, the system was then soft-launched with real clients calling for real cabs. Drivers and dispatches were not aware of the new system’s integration, and orders were filled as per normal.

Maybe faster, Haddon says, as the app saves time by eliminating the conversational back and forth spoken word orders usually received.

End-user testing was also conducted, and Haddon explained that the observations made there were one reason to scale back certain features on the app.

“We did look at using maps and GPS as a way to both give a call location and track a cabs progress. But we saw that the map interface can be clunky, and that pushing tiny dots across the screen can be a nuisance – we saw it happen, and so a list or a text option was found to be a lot easier and faster.”

Some people have big thumbs for a small screen; sometimes, late at night, some people should not be allowed to operate a car or a smartphone (and it’s good they are calling a cab, if that is the case). 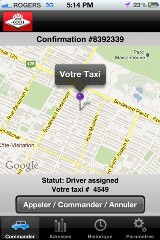 Montreal has a taxi app available from Diamond.

But the app will confirm an order’s been received, estimate its arrival, and ping a cab’s status through the app and track it to your door. Haddon says the developers worked with Google Maps and Google Places to incorporate both map locale and address listings into the app.

Haddon and Beck are already looking at the next iteration of the app, and how they can integrate a payment feature into it. Beck’s taxi fleet is being outfitted with new POS (point-of-sale) terminals in each vehicle, and so developers plan to integrate mobile and online connectivity with credit card or account-based payment options right in the app as another way to enhance and quicken the entire taxi experience.

Haddon calls the app “slick, quick and easy to use” and it’s bound to stay that way through future versions, including the upcoming mobile site for Android and BlackBerry smartphones and a Web-based booking site, due in a week or so.

Who should be driving the Social Media bus? Marketing or the Contact Centre?