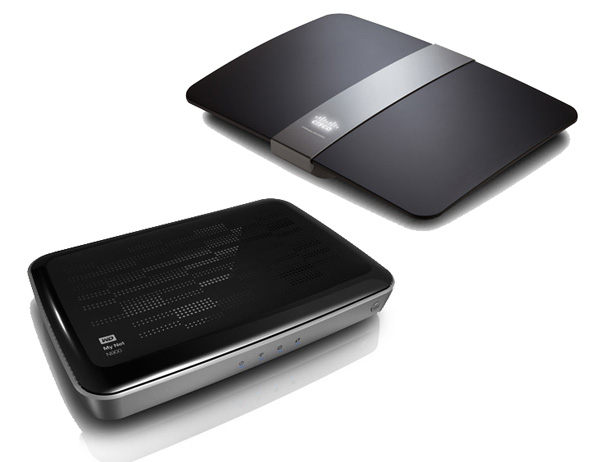 It’s still early, but the router, long the utilitarian device that does its job in keeping us connected, while collecting dust in the process, may actually become something cool. Western Digital’s My Net N900 and Cisco’s Linksys EA4500 are both two of the best routers available on the market, but how do they stack up against each other?

This is an interesting comparison, primarily because the N900 is the flagship in Western Digital’s first foray into router manufacturing. The company isn’t unfamiliar with networking gear, of course, but they didn’t set out to just make a run-of-the-mill router here. The premise was to make a “smart” and interactive one that any user could handle, no matter what their level of tech savvy.

Cisco’s Linksys brand represents the incumbent in this head-to-head. It’s been in this game for a long time, and the EA4500 is the culmination of the company’s vision of a router “in the cloud”. In other words, you would be able to tinker with settings and know what the network is doing from across the world if you wanted to.

On paper, the two stack up quite well against each other. Both are dual-band routers, meaning they support both the 2.4GHz and 5.0GHz bands, which all told, combine for transfer speeds of up to 900Mbps (450Mbps on each band). Both offer similar range, have similar connectivity options and come in at the same price point — $179.99 at retail stores.

There are a few differences off the bat though. The My Net N900 has seven Gigabit Ethernet ports in the back, compared to the EA4500’s four. The My Net N900 also has two USB 2.0 ports, so you can easily plug in external hard drives and use the router as a media server. The EA4500 has one USB 2.0 port. 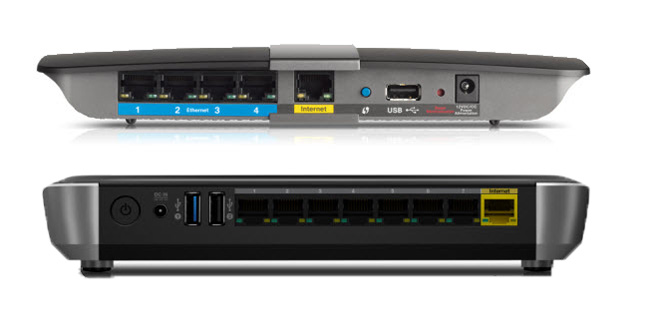 Both are relatively easy to set up, though the My Net N900 gets the nod here, since the EA4500 required that we manually upgrade the firmware in order to get Connect Cloud to run properly on the router. Tech-savvy and advanced users were so up in arms with the move to an entirely Web-based widget-style interface that Cisco pulled back and allowed users to revert to an older firmware in order to go back to the original Advanced Settings interface, if they wanted to. 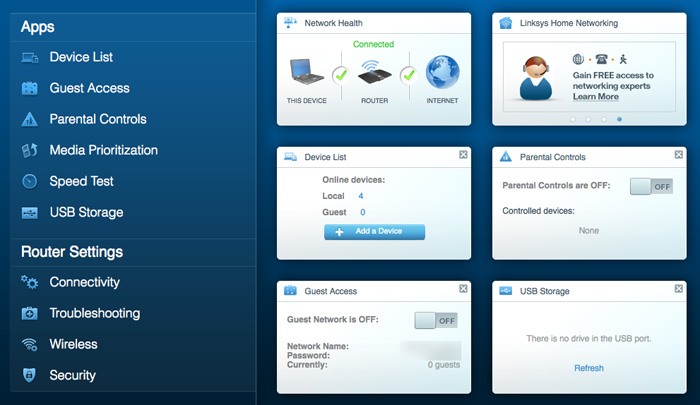 Average users are unlikely to be bothered by that, but either way, Connect Cloud allows you to log into your router no matter if you’re at home, or somewhere else. There are also dedicated apps for iOS and Android where you can log in and manage things from there. Connect Cloud, in a nutshell, allows you to prioritize up to three devices or even specific apps so that the router can ensure they get the bandwidth they need within the network. For example, you can add a PC laptop to that list, but also Netflix, so that anyone using Netflix on any device would get some priority in the hopes of a smoother playback experience. Everything not in “High Priority” is relegated to Normal Priority. You can switch these around at will, even when you’re miles away from home.

Western Digital took a slightly different approach with its cloud-based setup. For one, because it’s browser-based, there are no dedicated apps to download and use, other than the WD 2go Pro app, which is meant to access storage connected to the router. Second, you can’t actually tell it which devices you want to prioritize because it’s supposed to be smart enough to figure that out on its own. Using the FasTrack Plus QoS option under Additional Features in the Advanced menu, you can actually prioritize certain devices, if you want to, except it will come off as complicated to all but those who know what the options actually mean. 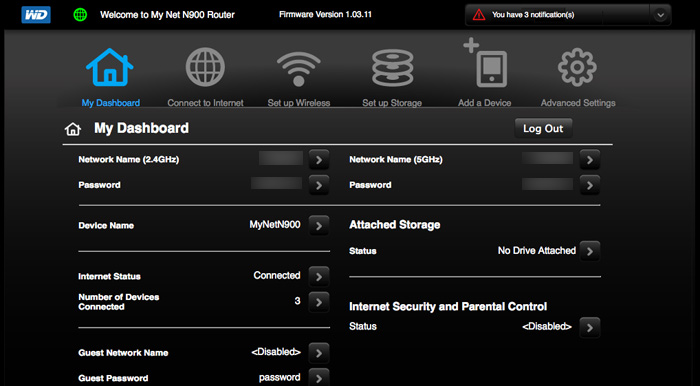 What’s supposed to set the My Net N900 apart is its ability to ping devices and respond in real-time. Here are examples of tests we ran:

We had Netflix playing a movie on an iPad, while also streaming an HD movie to a Boxee Box from a network hard drive connected to WD’s router. We started the HD movie first and then fired up Netflix on the iPad. The movie playing through the Boxee Box appeared unaffected by the addition of another video-hungry device, and this proved to be true of the EA4500, too. We should mention, however, that the Boxee had a wired connection to both routers in separate tests via a Powerline adapter.

We then moved on to streaming a big HD movie from a network drive wirelessly over to a Mac, while downloading a 300MB video file onto the same machine. To push things further, we also initiated file transfers of 2GB of photos from a PC over to the same network drive to see what would happen.

In both cases, the file transfer’s speed dipped, ostensibly because both routers were prioritizing both the video stream and the file being downloaded on the Mac. Video playback on the Mac seemed unhindered by the whole thing, though we did catch that the load time was a tad faster with the My Net N900. The caveat here was that there were hundreds of photos in the folder being copied, and transfers always take longer when a large number of files are being moved across network traffic.

In the third test, we had a Skype video call going on the PC, while Netflix was streaming on the Mac, a TV show episode streamed to an Android phone and an iPad was uploading a large batch of photos to Dropbox. The most obvious effect was with Skype’s performance, where video was a bit choppy in both cases. The My Net N900 recovered faster, but the EA4500 fared better at uploading the photos in less time.

We upped the ante a bit by having all of that going on, including two simultaneous torrent downloads on two different computers, and then playing a PlayStation 3 game online. The devices moved to the highest priority on the EA4500 performed relatively well. Ditto for the My Net N900. Still, it was painfully obvious there was way too much going on at one time, what with a handful of devices not only connected to the network, but also each performing demanding tasks.

What we realized is that a major factor was the actual Internet connection coming in from the ISP. We used one of the highest cable offerings from TekSavvy for testing, giving us theoretical speed limits of up to 28Mbps download and 1Mbps upload with a bandwidth allotment of 300GB per month. We found there was a verifiable difference when we conducted these tests in the late morning, late afternoon and late night. Late nights offered the best performance, overall.

Neither WD nor Cisco really discuss this openly in their respective marketing materials, but assuming we were working with a “Lite” Internet package giving us just 3Mbps download, and 256Kbps upload, it’s pretty much impossible that we would be able to multitask with so many devices with either router and not have a major disruption somewhere.

Essentially, if you’re going to pay $200 after taxes for a router, you should probably be spending a bit more per month for more speed and bandwidth to fatten the pipes for your media-hungry habits. We found the EA4500 performed better than the My Net N900 on the 2.4GHz band, but the My Net N900 was better at handling more complex and crowded bandwidth usage in a home environment.

We also liked having an extra USB port handy for plugging in a compatible external hard drive. Streaming from it was easy as pie. Not that it was hard to do it with the EA4500, just that it was slower. We found both easy to manage through their respective interfaces, but we would point to Linksys’ as the easier of the two. In spite of their respective shortcomings, these routers are a window into what a connected home could truly be.

Ultimately, these are two routers meant for consumers who have busy home networks, so if you barely do anything that would challenge your router, then these wouldn’t be for you. If you are media junkie and have an array of devices connected, then you can’t go wrong with either the My Net N900 or the EA4500.

Sony spruces up Xperia line with a SmartWatch and NFC SmartTags