With advertisers and investors depending on the friendliness – if not the propensity to buy stuff – of social media users, it’s obviously important to know how many there are, and what they really think, say or do.

So word that maybe ten per cent of Facebook’s account holders aren’t there – aren’t real – is a problem.

Facebook, in a recent “10-Q” filing to the U.S. Securities and Exchange Commission, said that some 83 million of the accounts on its network are fake. Duplicates, user-misclassified and undesirable are among the terms used.

Fake posts to fake accounts by fake account holders can obscure the real market value of social services like Twitter and Facebook, in the sense that ‘losing’ eight or ten per cent of your market will affect your income and revenue potential. They might also obscure the value, in terms of the number of followers, of certain celebrities or political figures or almost anyone who wants to appear more popular than might otherwise be the case.

But user errors, underage members or even a little mischievousness (how may of us have a couple of accounts, just ‘cuz) are not really the problem; what’s a far greater risk is the dozens of sites online where you can buy social media accounts by the thousands.

Facebook’s fake account figure is higher this time around than previously reported; the company said last March (10-Qs are regular, and regulatory, requirements for most public companies) that some 40.3 million to 50.7 million — five or six per cent — were fake.

That’s a big increase in half a year or so – it’s as much as doubled in that time. That could be because of better monitoring and fraud detection, or it could be signs of an ominous trend.

For its part, Facebook says that it is “continually seeking to improve our ability to identify duplicate or false accounts and estimate the total number of such accounts, and such estimates may be affected by improvements or changes in our methodology.”

A new report describes the social media underground economy, where accounts and followers are bought and sold.

The estimates could also be affected by what’s being called The Underground Economy of Social Networks.

In a new report, study and survey from U.S.-based Barracuda Labs, analysts say that fake social network profiles are at the centre of a vibrant and growing business.

Barracuda Networks says the underground economy consists of sellers or Dealers who create and sell the use of thousands of fake social accounts, and Abusers who buy followers or likes from these fake accounts to boost their perceived popularity, or to sell advertising based on their now larger social audience.

Barracuda says it easily bought between 20,000 and 70,000 Twitter followers from eBay and other websites, and put them into fake account it had set up. The average price to buy fake followers is $18 per 1,000 followers, it noted.

And the buying is easy: Barracuda noted 20 sellers on eBay and 58 websites out of the Google Top 100 search results that were selling fake social media profiles.

“Fake users should be a huge concern to both Facebook and Twitter because of the threat they create to user trust, online security and the overall community feeling of the social networks,” said Dr. Paul Judge, chief research officer at Barracuda Networks.

That “this obviously threatens advertising revenue as organizations begin to question the true visibility and reach of their ad campaigns”, as Judge adds, is but one concern. Other malicious activity may occur in order to boost a political candidate’s perceived standing. The Barracuda reports, for example, rips into Republican Mitt Romney’s Presidential campaign, and the social media related activity and numbers it cites.

Barracuda suspects tens of thousands of fake Romney followers, based on the trends it observed and commented in its study – like no posts at all from a quarter of the members, or a larger than normal single day spike in registered accounts, factors that led Twitter to suspend 10 percent of his new accounts, saying they most likely came from a paid Twitter follower service. 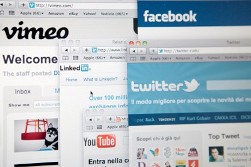 Social media sites can be undermined by an underground economy.

Fake or real, social media users are generating content that itself is sometimes suspect. Research is showing that gathered social media data is “noisier” and less precise than even traditional market research (which is often said to be a 50-50 proposition anyway)

Social media campaigns generate user and activity data that comes from page analytics that are often only available to campaign administrators. Reach versus likes, the actual number of page visitors versus the number of clicks on a ‘Like’ button, is one example.

And while the ‘Talking About’ metric is publicly visible, giving a measurement of how many people are commenting and sharing certain content, it does not reveal whether those comments are positive or negative – even dissing someone can bring up the number and leave a false impression.