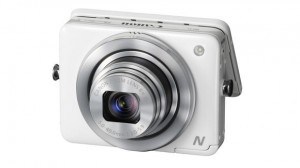 How does Canon, one of the leading camera manufacturers in the world, respond to the surging popularity of smartphone cameras? The answer is the PowerShot N.

Highly portable, always connected, versatile and made more fun to use by thousands of apps, smartphones are quickly killing off point-and-shoot cameras the way they obliterated the standalone MP3 market. Users don’t want to carry an extra device if they don’t need to and if they feel that the picture quality they get from their smartphones is adequate for most uses, then why bother getting a standalone point and shoot camera? 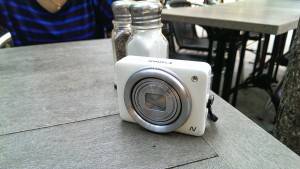 For Canon, right now, the answer is the PowerShot N (SRT $299). Designed to be a super portable and touch-friendly point and shoot option, it is no bigger than most smartphones yet has a bigger sensor, larger optical zoom and some innovative features.

For any photographer that’s used to traditional camera, the PowerShot N is a bit confounding. Its square design is awkward to hold at first, and the idea that major controls run through the touchscreen takes getting used to.

It also uses microSD cards, which makes sense given its smaller size but will put off any user who has collected full-size SD cards from previous devices. The battery is also a tiny thing and quite non-standard. It has the shape of a sawed-off AAA battery, which means its likely that only Canon makes replacements. 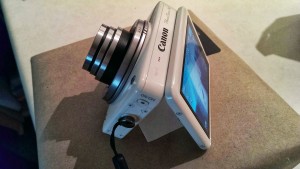 This is , however, a full-featured Canon camera, and one designed around simplicity, fun snapshots and versatility. The screen flips back and is ideal for taking self-portraits or acting as a mini-tripod. It is also good for ‘from the hip’ street photography or when you want to shoot from the waist.

Canon made the PowerShot N out of metal, which speaks to its durability but this does factor into its weight. Being perfectly square camera means that it is sometimes challenging to figure out what the orientation is if you’re feeling for it in your jacket pocket or your purse.

One you get over these quirks, the PowerShot N is a fun and unique camera to use. It will certainly appeal to the younger demographic, folks who like trendy and unusual technology as well as people looking for one of the most compact cameras around.

Since almost everything is done via the touchscreen, controls may be a bit fiddly at first but most users will have an easy enough time getting up and running with the PowerShot N. Creative Shot mode, which takes 5 simultaneous photos and automatically applies filters and different cropping and framing effects is a fun feature that adds some panache to picture taking.

This camera sports Canon’s Digic 5 processor and has a 28-224mm equivalent lens and a 12MP CMOS sensor which gives it a range that no smartphone can touch. It also has built-in WiFi for connecting to smartphones and sending photos. This feature is a bit half-baked, it requires some fiddling and honestly just makes you want to take photos with your smartphone unless you’re capturing something really special. 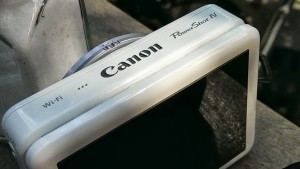 More serious photographers will opt for something more traditional or feature-friendly and Canon, as well as its competitors, still sell a ton of those. I’ve been a big fan of Canon’s advanced point and shoots and have bough the S90 as well as the S100, these are slightly more expensive but they offer most of the features larger cameras have in a compact form factor.

While the S100  or the later version, S110, doesn’t have a tilty screen, It is still my go-to camera for 60 per cent of the event photos, product demo videos that I take in my day to day reporting.

The PowerShot N would be a viable back-up camera or just the sort of thing to bring along and pass around to friends who just want to take snapshots and share them later on. The WiFi component is interesting and could be useful.

Will it replace smartphone cameras? That’s unlikely. The PowerShot N is too heavy, has some unorthodox controls and isn’t the most intuitive piece of kit.

It is a good start and takes great pictures and video in most conditions. I’m excited to see what the second generation of the PowerShot N will bring, hopefully a thinner and more compact as well as connected device all around.