What is this place?

First, there’s a Bowie exhibit – a small collection of posters, albums, magazines and more about the British rock star that greets visitors on the main floor.

Over in the corner, several blinking lights, humming electronics and purring computers all testify to the fact this is not your grand-daddy’s library! 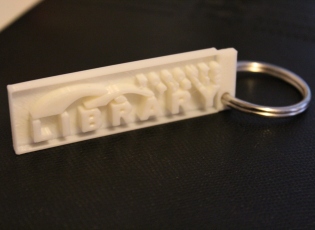 The first Hub has just opened inside the main Reference Library at Yonge and Bloor; at least two more of the digital media and creativity centres are set to open in other Toronto branches later this year. Libraries, no matter where they are located, are all looking for ways to remain relevant in the digital age, and for ways to engage and connect with a younger audience.

Offering access to technology on the desktop, as much as books on the shelf, is one solution being implemented by libraries no matter where they are: Toronto now has its first Hub, so, too, this year the Hamilton Public Library system is opening technology access centres in two of its branches.

All the technology is there to support learning, and creativity, and collaboration, and greater participation in our increasingly digitally-driven economy, described City Librarian Jane Pyper.

It may be those 3D printers that draw the most curious and the most creative folks to the library hub, where two Makerbot Replicator 2 printers are now in use: 3D printing has certainly gained popularity – and generated controversy – recently, and while many 3D printers are available in the marketplace, the technology and process remain a mystery to many observers. 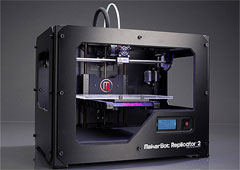 Two Makerbot Replicator 3D printers are now accessible at the Library, along with other digital technology and support.

But now book-borrowers (you do need a library card to access the Hub’s services; most are freely accessible, although there is a cost connected to 3D printing materials) can test the device and create their own 3D products. There is a two hour time limit on individual sessions, and because some 3D print jobs take several or tens of hours, a certain limitation is built-in to the kind of project the Library will support; project approval from Library staff is also necessary for the 3D output.

Library-goers can sign up for seminars and workshops that will teach them about the 3D printing process, and the safety procedures involved.

Eventually, said Hub support staffer Ab Velasco, the library plans to partner with other local tech shops and “maker spaces” (a community centre that allows people to use technology and participate in workshops) to develop and deliver more advanced programming for 3D scanning and printing activities.

In fact, the Library plans a lot of interaction with local tech groups and development communities: several meet-ups, speaker events, and free classes will be held, along with special ‘hackathons’ and ‘maker-faires’ in which certain digital technologies or creative techniques are explored and demonstrated in even greater depth.

At the Hub’s opening, in fact, Toronto Mini Maker Faire’s  Eric Boyd confirmed that the next Maker Faire would take place November 22 and 23, 2014, inside the Reference Library!

In the meantime, courses, classes and tours of the Hub are being offered regularly; check the Library website for more details.

And, hey, while you’re online, check out the Library’s digital download services: you can get free magazines online from the Library website, with a lot of popular consumer and news titles available, and there’s even some talk that movies and music be streaming out of your local library very soon. 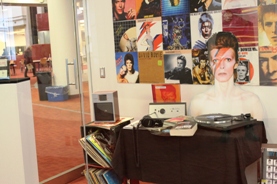 A temporary exhibit at the Toronto Reference Library hints at the value of brands and the power of imagery, both for rock stars and for public libraries.

Whether they continue to feature David Bowie or not, a new kind of library has now opened!