Driving is not a right, as they say, it is a responsibility – but for many young people, getting that first driver’s licence is like being handed a ‘Get Out of Jail Free’ card.

It’s nothing of the sort, of course – driving is not free by any stretch, and driving irresponsibly is much more likely to get you into jail than out of it.

But driving is a kind of right of passage for young people, new Canadians or anyone behind the wheel (legally) for the first time. And obtaining a driver’s licence is often a necessary step in gaining employment or starting a business. 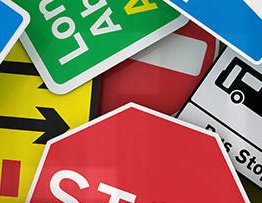 You need to be able to recognize – and follow – a myriad of traffic signs and symbols to get a driver’s licence.

So it’s no surprise that many businesses have started up to help people pass the test and get their licence. There are several driver-training centres in Ontario, for example, where students can get instruction and practice behind the wheel. (There’s also a “buyer beware” warning with many such training centres, so check the government’s approved list of driver ed centres before you sign up.)

More and more driver training companies (insurance companies, too) are turning to technology to support and supplement the training they offer – in some cases, the training is all-digital.

Driving-tests.org, for example, has developed online learning software that closely simulates the kind of written exam that a Department of Motor Vehicles (DMV) might give to aspiring new drivers in one of many jurisdictions (each country, province or state has its own driving rules and regulations).

Based in Hamilton, ON, the company has also launched www.G1.ca, a website specifically developed to help Ontarians review driving, road and traffic information before taking the written road test. The site lets users take the simulated G1 practice tests, and learn about road signs and symbols for example, as many times as they like, while getting immediate on-screen feedback. No registration is required, and the test is free.

To further boost accessibility and exposure, the online driver education training program that the company offers is being provided to libraries across the province, so they can offer it to their patrons. The service is free of charge, and there are no limits to the number of library patrons that can login to the study program. There’s even a custom-branded landing page, created for the host library by G1, with the library’s name and a welcoming message for users.

(Library patrons can also get a hold of the Official Ontario Driver’s Handbook through their library, or review it online at the Transportation Ministry’s website.)

The company co-founders and site co-developers Andrei Zakhareuski and Maryna Zakhareuskaya have added even more training aids to the G1 site by taking the basic multiple choice tests and enhancing them with pop-up tips and hints, and a new feature that will read the practice tests to trainees with learning disabilities, reading challenges or vision problems.

“The new features provided by working with BrowseAloud will turn the site into an even more advanced learning resource for drivers of all ages. All our practice tests can now be read aloud for those with (driving acceptable) vision problems, ESL speakers, and those with learning disabilities, like dyslexia,” Zakhareuski described.

Other accessibility features on the site will let users not just hear turn text, but also capture it as an MP3 audio file. English text on the site can be translated into other languages, and on-screen text can be magnified or masked for greater visibility.

Such tools can be a big relief during practice runs, as there are some tests with 200 questions to review! That’s a lot of online clicking to select a question, get a hint, reveal the answer and move on to the next question.

Even so, 200 questions may be but half of what a potential driver should study and practice. 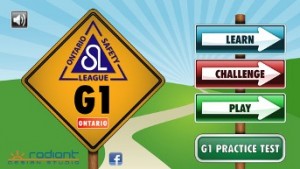 Online and mobile apps can help people studying for their driver’s test.

The G1 Ontario Safety League’s mobile app for the G1 test, LearnPlayDrive, features more than 400 questions and answers! There are even bonus challenges and games to further enhance training.

The app also uses an interactive teaching method, but it can be used without an Internet connection, data or Wi-Fi usage.

Developed by Radiant Design Studios, based in Nepean, ON, the training app is available for Apple iOS ($1.99) and Android devices ($0.99). It is one of several such apps the company develops, for jurisdictions like Ontario, Alberta, California and more.

Here in Ontario, to be clear, there’s a graduated or multi-stage licence system, designed to give new drivers time to practice and gain driving experience over time. Drivers have up to five years to finish the whole process. 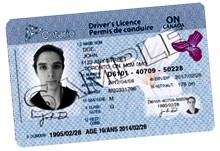 There are multiple steps needed to get a valid driver’s licence, and online interactive tests can help.

By passing first stage eye and written tests, drivers get a G1 licence. There are two learning levels, G1 and G2, and two road tests, to successfully complete before drivers can get a full G licence.

All told, learning drivers will be asked to pay $125 up front, to cover some test costs and a five-year licence fee.

Driving is not free, and even before you have a car, insurance, gas or a parking spot, you will be paying for the privilege.