Like a stove or a fridge today, 3D printers will be commonplace in the homes of tomorrow.

Or like an office desk and computer keyboard, they will be a regular feature of the workplace. 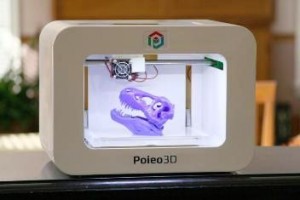 We’ve heard a lot about the soon-to-be ubiquity of these new printing devices that turn out three dimensional objects much like old fashioned printers turn out flat documents.

But the extended vision behind the launch of a new consumer 3D printer by Toronto-based Poieo sees them as a friendly and familiar tool in the classroom, as well.

The Poieo3D Printer is positioned as a consumer friendly, kid-friendly and environmentally friend device. About the size of a toaster oven or counter-top microwave, the printer can create three dimension physical objects of approximately handheld size, roughly 7” x 3” x 3”, or 200mm x 100mm x 100mm. 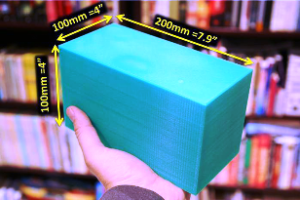 Approximate size of objects made in the 3D printer.

The Poieo3D Printer was specifically designed to use biodegradable print material, developed from corn starch and sugarcane, as it printing ‘ink’ The objects it makes are not edible, but neither do they give off a foul smelling chemical odour during the print process, and no toxic fumes, either. That makes the printer well-suited for home or classroom use, say its developers.

Jeff Alford and Tom Zelenka are co-founders of the company; along with their expanded R&D team, and with a lot of input from their families, the pair share a vision for the technology that sees it as a centrepiece of learning activities and classroom assignments.

The idea picks up and builds on the popular trend among public library systems to go digital: many libraries have opened up tech labs where devices like 3D printers can be used by cardholders.

Whether at the library or in the classroom, “[t]here are many aspects of the curriculum where the Poieo3D Printer could be used to further the learning process from biology to geometry and so much more,” Zelenka says, citing another example that could be included in learning modules for a grade school exercise, wherein students print out small pulleys and gears to demonstrate basic weight and leverage principles in a science curriculum.

To address potential concerns about operating technology at home or in the classroom, Poieo was designed with added safety measures: there are no sharp corners or edges on the rounded, polycarbonate casing. There are no distracting buttons, switches or screens. The company founders worked hard to protect users from hot surfaces or cutting devices found in other printers.

The unit has one large window, and some LED illumination, so users can safely watch the layer-by-layer printing of their 3D creation.

Those creations can be made in any number of colours, working with spools of a thin flexible bio filament that acts as the raw material for the printer.

Alford notes as well that plans for printing 3D objects can be found online, or users can create their own plans. Like a computer program, the print plans are software commands that tell the hardware what to do; Poieo is compatible with existing 3D file formats.

In developing their product, building their company and taking it to market initially through a Kickstarter campaign, the founders say they have identified gaps in the marketplace that they plan to fill themselves.

“We have learned so much along the way through this journey and want other families and kids to benefit,” Alford recalled. “What we found frustrating, however, was that we could not find a good on-line educational resource that teaches how to use 3D printers, where to find and/or design images, and so on.” 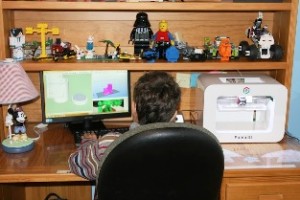 The Toronto-based company behind the Poieo3D printer offers in-person and online training and information about 3D printing techniques and technologies.

So they are also building up an online educational community for learning about 3D printing, complete with training modules, instructional videos, and printing projects for kids and families, along with in-class projects and additional resources for teachers.

The Poieo3D Printer is available for purchase from the company’s website; special pricing offers and printer/filament spool bundles are often available as well.