Canadian entrepreneur and Wirkn founder/CEO, Derek Szeto, thinks so. His mobile job search and recruitment platform is novel and ‘candidate-centric’. I asked Derek about his business and his vision to bring together employment search success, mobile and social media.

Q: Tell me about Wirkn. What makes your business unique?

A: “Wirkn is a mobile job search and recruitment platform,” Szeto began.

“The idea initially came from Francois Jobin , former VP of Aldo HR, due to the shift that he was seeing over time: employees becoming less engaged, less loyal.  As well, the transition to hiring more and more part-time workers, while relying on the painful hiring process that still most often starts with handing out paper resumes.”

“I thought, nothing is out there to address this market of shift-based retail and hospitality workers, especially on the candidate side, so we’ve created it.”

“The difference is two-fold:

Wirkn is an advocate for the candidate. Most of the systems out there, like Monster and Workopolis, and 99% of software solution for hiring is built for the employer and pushes the candidate through the flow that the employer has designed. There is really nothing out there that caters to the candidates. What’s more, Wirkin is mobile. Mobile is a perfect solution where candidates pull up the app, use the GPS to locate opportunities around them, do a quick video and apply wherever they are. Mobile is a far preferred preference, too.”

“Wirkn is much more than post-a-job, fill-a-job. It’s more like LinkedIn in that you have a central profile and you continue to use it post employment to network, communicate, and more uniquely in our case, engage directly with your employer.

Q: Why is mobile so critical for youth when searching for employment? 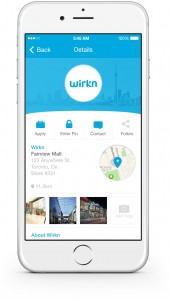 A: “It’s simply their screen of choice. A lot of people have their mobile device with them and on, practically 24/7; you’re always checking it,” explained Szeto.

“Youth may not have a desktop or laptop computer, they may not have a tablet, but I guarantee you they have a phone and, if they could, they’d run their entire lives through it. It’s instant access. It’s what they’ve grown up with and what they know. They can digest content, complete tasks, keep up to date in bite size chunks, whenever they have a few minutes as it fits their schedules.

Q: How are you using social media?

“We’re still mostly using it to share updates and news about Wirkn,” said Szeto. “We’re just starting to engage with different student groups, associations, and individual employers and job seekers directly, but it’s clearly where a lot of our user base is at and we can see that by the strong growth in Twitter/Facebook fans already, but we can do so much more!”

“Yep, it’s a marketplace model, which means we have both job seekers and employers on the platform and our job is to match them. There’s actually a third segment, those currently employed and want to use it for a communication tool between team members.

Q:  2015 has already seen  retrenching from U.S. companies & other closures in Canada. Can Wirkn help youth in this sector? What other sectors can Wirkn serve?

A: “Certainly,” remarked Szeto. “The entire design of Wirkn is geared towards retail and hospitality workers – both youth and beyond – but we certainly see a broader opportunity in any shift-based industries at large, typically in the service sector. At the same time, we realize we have to focus to make sure we do it right in a vertical first before we get too far ahead of ourselves.”

“Keep in mind, I’m new to the HR space myself so there’s probably more opportunities than even I can see. Even early on though the more I dug into it, the more it felt like it’s the right time and that Wirkn can really make an impact in not just Canada, but across the world. I worked with Anthony Chan at RedFlagDeals, and we brought him back from MasterCard in Singapore partly because he saw the same opportunity for it to be global and even more relevant in Asia where the number of sales staff per square foot is even higher.”

Q: What’s next for Wirkn?

A: “The focus now is generating awareness so we can get job seekers to try Wirkn,” remarked Szeto. “How can we reach everyone who has been displaced by Target or Sony or Mexx or anyone of the retailers’ closing, and to get them on Wirkn, to be their advocate, and to match them with opportunities.”