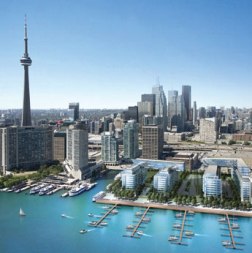 Exciting opportunities stretch from Toronto’s waterfront well into the future for data-intensive businesses and high-tech industries, not to mention international athletes and local IT students.

That’s because advanced broadband and technology infrastructure installed there is underpinning significant commercial and residential development – and being used to have a lot of fun.

For example, the new Waterfront Innovation Centre was unveiled on Friday, one that will be home to numerous established businesses and start-up companies working in mobile technology, data visualization, telecom and media.

When finished, the new building will house highly wired and highly flexible workspaces that reflect new working realities in the high-tech and media sector: it’s not a 9 to 5 world, it thrives on open collaboration, it needs a significant amount of bandwidth – and talent.

The people working at the WIC — students, technologists, craftspeople, entrepreneurs and business partners — will be drawn by opportunity, but they succeed based on talent, skills and vision.

While the first such tenant may not move into the as yet to be built high-tech building for three years or more, the new facility will be neighbour to the state-of-the-art TV facility at Corus Quay, and the George Brown College dockside campus, recent additions already flourishing on the waterfront.

Those facilities and more are important parts of the growing knowledge-based economy and new smart city infrastructure that has Toronto ranked as an international leader in the Information and Communications Technology sector.

The city ranks in the Top Three urban centres for ICT in North America; it is also among the Top Ten in new business start-ups.

Those were among the messages delivered by key partners in the waterfront development process from both private and public sector organizations, and all three levels of government. Speakers include federal Finance Minister Joe Oliver (also minister responsible for the GTA); provincial Employment and Infrastructure Minister Brad Duquid, and the city’s new Mayor, John Tory.

Also speaking were top executives from Waterfront Toronto and the private development company Menkes – a key partner on the new Innovation Centre project.

(Waterfront Toronto has many development, technology and finance partners as it continues to revitalize the city’s central Harbourfront area, and develop new work, play and living spaces in areas like the East Bayfront and the Distillery District, among others, as Board Chair Mark Wilson, and President & CEO John Campbell, described during the Innovation Centre ceremonies.) 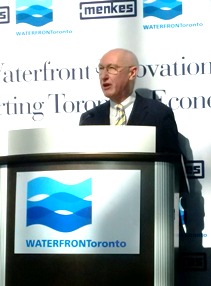 The ability to handle “extreme data”, not just big data, will fuel the next generation economy.

And provide employment for 2,000 people when it’s done: the Mayor called the new Innovation Centre a “job creating jewel.”

Of course, those numbers are a prediction – and most likely a combination of existing albeit relocated jobs, along with new employment opportunities at the Centre.

Developer Peter Menkes shared some of the math behind the job prediction calculations, explaining that by multiplying an industry standard number of jobs per hundred square feet of workspace by the 350,000 he expects to build, a total is reached that represents the building’s employment capacity.

The tenants who will employ those people have not yet been identified – or at least not announced – so there is much work to be done, in addition to the actual construction of the building. 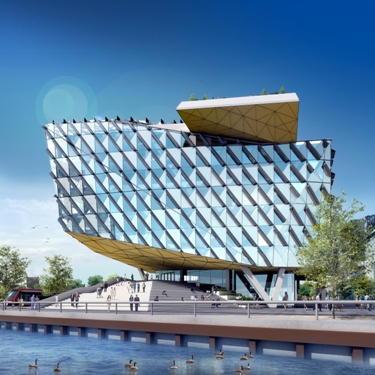 Plans for a new high-tech Innovation Centre are part of the knowledge-based economic community being developed along Toronto’s waterfront.

But well before work on the WIC has even started, another aspect of Toronto’s burgeoning waterfront activity will have ended.

The countdown is on, because in just 20 weeks or so, this area – and other municipalities in and around southern Ontario – will host the 2015 Toronto Pan Am Games, to be followed by the Parapan Am Games.

Together, the events make up the largest such multi-sport athletics competition in the world – yes, larger than the Olympics (but operating with a smaller profile and budget)!

Thousands of athletes from dozens of countries will participate, staying for the most part in the new Athletes Village on the waterfront as the competition unfolds in many brand new high-tech-capable sports facilities across the region. Tens of thousands of staff and volunteers will help run the Games and greet hundreds of thousands of residents and visitors. Millions around the world will watch.

As any avid or even casual sports fan knows, games today rely on information technology more than ever – for fan ticketing, event scoring and stadium replays; for international broadcast TV and streaming media coverage; and the mobile feeds and social commentary fans in the stadium and audiences around the world can generate.

Even the athletes are often wearing tiny real-time sensors and data collection devices to better monitor and eventually improve their performance.

Sport needs technology, and based on the digital corridor, installed infrastructure and talent pool the region offers, people are eagerly anticipating some great Games.

Many were at yet another event held on Toronto’s waterfront this weekend, as hundreds of eager volunteers, event coordinators and participants gathered to kick off the I CAN Learn student program; the event was held at George Brown College, right next door to the site of the Waterfront Innovation Centre.

I CAN is a volunteer program for Greater Toronto Area students enrolled in CISCO Networking Academies at their high school or post-secondary institution.

The program seeks to engage students in the study of math and science, engineering and technology, by connecting it to sports, and showing how important technology is to many different disciplines and activities, not the least of which is fun and Games.

The program’s activities will see more than 350 students, aged 16-22, building, testing and delivering the massive technology solutions powering the TORONTO 2015 Games working with CISCO engineers and TO2015 Venue Technology Managers.

CISCO Canada is the Premier Partner and Official Information and Communications Technology Provider for the Games, and the host for the ICAN project. 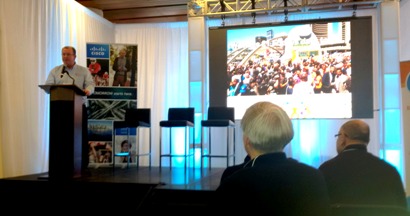 CISCO Canada is the technology partner for the Pan Am Games; the company is training hundreds of IT students who will volunteer at the event.

The volunteers will be hands-on technicians and operators at the Games, there to ensure that the crucial ICT infrastructure for the Games performs smoothly and successfully.

What’s more, the student volunteers not only study in preparation for a career in ICT, they learn about teamwork, interpersonal communications, and how to cooperate in achieving shared goals.

Among those coming in from many different schools, students from the CISCO Academy at St. Jean de Brebeuf secondary school in Hamilton, ON, were on hand for the high-energy event. They represent one of the largest IT training facilities in southwestern Ontario; of the more than 150 students enrolled there; roughly 20 will be put to the test at the Games.

These techno-savvy students will help operate and maintain the IT systems used for just about everything at the Games, from ticketing and accreditation to event statistics to media coverage and more. They will work directly with event coordinators, system engineers and venue technical managers from CISCO Canada and the Organizing Committee.

Saäd Rafi, the CEO of the Games Organizing Committee, along with Jeff Seifert, Chief Technology Officer, CISCO Canada and Brian Cook, Toronto2015’s Vice President Technology, were on hand to greet hundreds of enthusiastic students, many of whom are deeply involved IT already, as students of the CISCO Academy, its global network of IT training facilities.

Rafi, Seifert and Cook spoke in turns to not only the physical legacy of the Games, in terms of the new sports facilities, ICT infrastructure, Athletes’ Village and more that that will remain once the Games are concluded, but they also said an intellectual legacy will remain, represented by the training and experience and job skills gained by all those student volunteers.

The real-world training they will receive from their participation in the Games will be terrific preparation for a successful career in IT, and part of those opportunities stretching into the future.

Could Sling TV in the U.S. spur TV change in Canada?