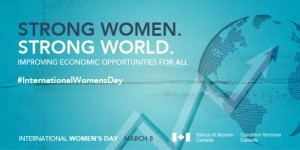 Each year, Canada coins a particular theme for International Women’s Day, celebrated on March 8. And this year, the Honourable Dr. K. Kellie Leitch, Minister of Labour and Minister of Status of Women, is focusing on strength with the tagline Strong Women. Strong World: Improving Economic Opportunities for All.

What is International Women’s Day?

As the name implies, March 8 is a day specifically set aside for Canadians to celebrate progress toward equality for women, as well as recognize barriers that still exist, and discuss what can be done to help break them down. While one might think this is a relatively new initiative, the first IWD was actually observed on March 19 in 1911 in Austria, Denmark, Germany, and Switzerland.

Today, the date of IWD has been adjusted to fall within International Women’s Week, which, this year, will run from March 1 through to Sunday the 8th.

The implication with this year’s theme is that strong females can help to develop a stronger world, both on an economic and domestic level. Indeed, females are increasingly holding stronger roles in the workforce, with more and more women becoming business owners as well.

United Nations has its own global theme for the event – Empowering Women, Empowering Humanity: Picture it! But the underlying intention is the same. And this year, worldwide, countries that recognize IWD will be commemorating the 20th anniversary of the Beijing Declaration and Platform for Action. This helped set the stage for women’s rights, calling for everything from the advancements in the goals of equality, to acknowledging the voices of all women, and recognizing the status of women.

Last year, women accounted for 47.2% of the labour force in Canada. That’s slightly up from 45.7% in 1999. In 2013, women held only 15.9% of board director positions within Canada’s FP500 companies. Clearly, we still have a long way to go. However, women-owned businesses are on the rise  – they currently employ more than 1.5 million Canadians.

The Canadian Government has taken several steps toward better recognition of strong women in the workforce. Last Fall, the Expert Panel on Championing and Mentorship for Women Entrepreneurs was created to help support female entrepreneurs. And in 2014, the federal Advisory Council for Promoting Women on Boards was released, with the goal of encouraging more female representation on public and private boards.

Want to celebrate IWD? The UN has developed a tagline ‘Make It Happen’ with a dedicated Twitter hashtag. In Canada specifically, you can follow @Canada_swc, the official account for the Status of Women Canada.

“On International Women’s Day 2015, we will celebrate the outstanding contributions women make to Canada’s economy,” says Dr. Leitch, “and we will reaffirm our commitment to create more opportunities for women to contribute, now and in the future. When women succeed, Canada succeeds.”