Our techno-enabled, highly media-ted world is leading us to digital doomsday. No, it’s going to be ubiquitous utopia for all!

Plenty of bandwidth for both streams of thought at this year’s ideacity, the 16th annual think-fest staged by Moses Znaimer, businessman, publisher, curator, media mogul, mayor.

Ideacity, again held at Koerner Hall in Toronto, is structured as a series of short (about 15 minutes each) stage presentations by noted thinkers, authors, researchers, technologists, social scientists and more. The event lasts three days, and the ideas come one after the other, each presenter persuasively speaking to a loosely themed topic or concept: Health and Wellness; The Weather; God Pod; or as a session on this day is called, Digital Utopians vs. Skeptics.

(There are entertainers and musical performers, too, and much-deserved refreshment breaks, as counterpoint to all the ideas.)

The digital discussion was tackled by four men; their separate talks showing an even split on either side of the imaginary half-empty, half-full line: two are optimists, two are pessimistic about technology trends today. 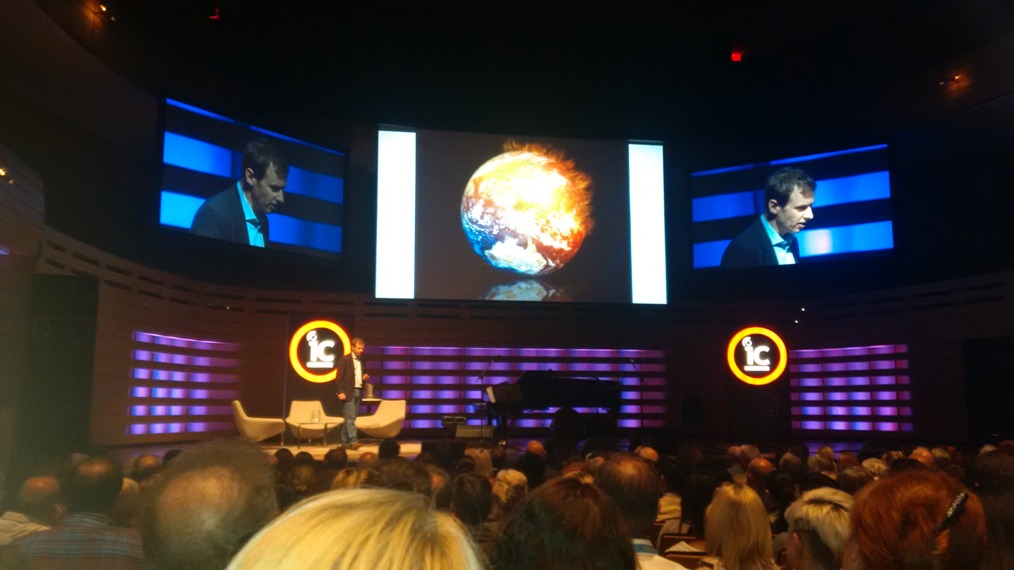 Is the world half-empty, or half-full? A beautiful blue globe, or a fiery inferno? Digital skeptics and digital utopians light up a session at ideacity.

Author, ex-soldier and U of T grad Paul Robinson framed the idea in a much larger context to start things off: is the world more dangerous, more at risk, in our current situation?

“No!” is clearly the optimist’s reply: citing statistics and using charts to track the history of danger – warfare, violence, terrorism – over several recent decades, Robinson painted a pointed picture: those who wish for the “good ol’ days” shouldn’t.

He took time to relate the now oft-cited story of Soviet submariner who, well, saved the world on one of those days. During the Cuban Missile Crisis of October, 1962, a Russian naval officer named Vasili Arkhipov said “No!” in answer to a frightening question: should we fire a nuclear warhead at that U.S. ship?

Never has the world been so close to total catastrophe, Robinson described tersely, as at that moment. Luckily, Arkhipov refused to push the button down, and we avoided nuclear war. Are we not safer than that?

An idea flashes by: turn the question around somewhat and ask, is there actually one man today with the power to avoid a catastrophe today, a catastrophe like, say, climate change?

Certainly not. Can one wish for a time when there was in fact, just one button…?

Robinson closes with a great point about misreading history, and the resultant inappropriate negativism, even fear-mongering, that’s found in media and politics and even some technophobic reporting these days: our fear drives our public policy, and yet the evidence shows that society’s high incarceration rates, its hyper-surveillance and security efforts are not necessary. Nor is the fear.

“None of it is needed,” Robinson affirmed, to rousing applause. 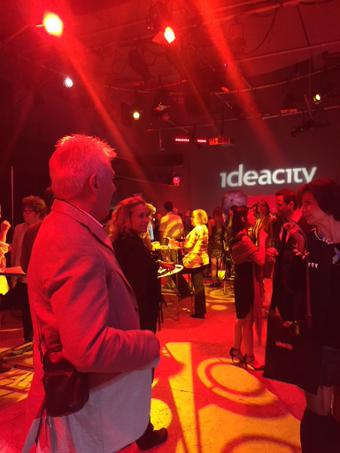 Thought-provoking ideas come almost non-stop throughout the three-day event (and reports about ideacity can be rather lengthy, too), but each night, ideacity becomes Party City, as attendees are bussed to popular night sports for exciting evening events. Photo @ideacity.

Peter Nowak picked up on the optimistic theme in his presentation, even promising us “a trip to utopia.”

The award-winning science and technology writer described in his talk (and in his book, Humans 3.0) why we seem all too attuned to bad news: we are biologically wired for it.

Our body is the evidence Nowak cited, noting how the human nervous system responds to pain – immediately, we know we’re burning our finger. Ouch! We are alerted and we respond.

But he says the body does not tell us of all the good things, much less the OK things, going on, so we do not really respond well to positive reinforcement.

Nowak encouraged his audience to realize the future benefits and positive potential of what may appear to be the negative impacts of technology today.

For example, robots. Robots and barkeeps. Robots may threaten the livelihood of bartenders with their automated dependability. But think of what the gastronomically programmed ‘bot will enable us to do, Nowak ventured, showing a snapshot of a food vendor’s truck with lots of interesting drinks and meals based on exotic recipes, all concocted by robots and super-computers.

The idea that the prices on this new utopian menu are going to be very high floats down, along with the notion that the cost of fewer bartenders is fewer workers.

Worker displacement and economic disruption is still the problem, not spilt drinks. Less employment means fewer resources available, and not just for the poor person not working – it’s fewer resources for society as a whole, as fewer and fewer contributions to it. The disrupted end up needing from, not giving to society. But is that cost on the menu?

Interestingly, even politely, Nowak nevertheless concluded his talk by encouraging us to “get off our screens” every once a while – a nice touch.

Nicolas Carr on the other hand, encouraged us to smash our screens, and throw down our smartphones!

He’s concerned about their addictive, destructive properties, and he too points to human physiology to explain why.

Our bodies release neuro-chemicals in response to external stimuli, and dopamine is one chemical we generate as a kind of reward for ourselves for doing, finding, having, and being something good.

As we search and scan our screens for little rewards, little bits of information that match our preconceptions and expectations, we reinforce the desire for more such little rewards.

That trigger is multiplied many times over in today’s hyper-connected world, and Carr cited research showing gadget-loving users have regular and repeated interactions with their device, often without realizing it’s hundreds of times a day!

Dopamine causes us to create our own world, one where reward comes as often as possible. Technology has enabled us to create a world that feeds our needs seemingly continually, Carr cautioned, a world where the source of reward is highly valued with its unqualified promise of satisfaction.

An idea once manifested itself that the only way to avoid the risks of smartphone use (whatever those risks might be, from high monthly bills to Wi-Fi radiation to lack of privacy and beyond) was to leave the darn thing in its box.

‘That’s not an option for some’ came the reply, with an implication of actual utility and functionality. But now we know the real reason: it’s biologically addictive.

Carr techno-pessimism surfaces in work with scary titles like, Is Google Making Us Stupid?, but he explained his concerns over what the Internet is doing to our brains with another example from the human body:

We basically operate with two kinds of memory: working or short-term memory, and the more traditional sense of memory as long-term.  Much like computers, in fact, with their volatile short-term RAM, and longer-term storage on hard drives or memory cards.

Just like the computer, which will lose its RAM contents if not saved, the human brain will not be able to process or make use of short term memory unless it is consolidated, processed in meaningful ways.

We humans are not getting the time we need to process all the information we are exposed to in our ‘always on, always connected’ media environment, Carr concludes, and so we lose the ability to make sense of – and gain future value from – almost any of it.

We’re deep in the skeptical waters now, and Andrew Keen is going to push us in even further. 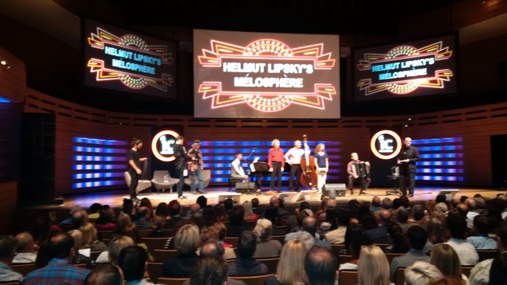 Music performer and entertainers also grace the stage during ideacity.

The digital revolution is a failure – an “epic f*****g fail” – he says, and you can sense the anger as he says it.

In fact, getting angry seemed the point: a scene from classic 1970s film Network was screened during this session, the scene in which actor Peter Finch, as network anchorman Howard Beale, encourages – even berates – his fictional TV audience to yell out, “I’m mad as hell, and I’m not going to take it anymore!” in response to the craziness of the time.

Keen encouraged his ideacity audience to do the same, right then and there!

Sure, a sense of mad-ness does colour our world, then and now. Yes, it’s crazy to continue to blindly accept the direction of digital developments if they are not equally shared, safely operated and broadly beneficial.

“It’s a less equal world,” Keen says of the Internet era, and in particular the emergence of social media, Big Data and the so-called sharing economy: “Enormous wealth is shifting to Silicon Valley,” he pointed out, and multi-billion-dollar companies are being created based solely on our contributions of labour, our content, our stuff.

The promise of a level playing field created by the great democratizing influence of the Internet has led unfortunately to even greater economic disparities, and that tilt is “wrecking us”, Keen bemoaned.

He cited the disruption and disparity reflected in just one example: the old economy company called Kodak, which once employed 150,000 people, is essentially gone. The replacement from today’s sharing economy, Instagram, worth tens of billions of dollars, and a staff of 15.

Getting mad may well be the first step in addressing a perceived problem or overcoming an obstacle, yet surely our world needs less ‘mad-ness’, not more.

Anger and fear and pessimism are too closely linked; it’s other human traits (respect, fairness, optimism) that need a reboot,  just as we need a new version of our guiding principles for technological development.

Of course, it is foolhardy to be too skeptical of technology today, particularly when one is using it right here and now. So, before smashing or even putting aside temporarily any technological crutches, make a clickpath over to ideacityonline, where these and many other ideas, talks, people and presentations can be found.

Ideacity often connects with leading digital and social platforms (yes, sharing economy companies one and all) to spread the word, and organizers promised many opportunities to watch the best moments of this year’s gathering, along with an archive of previous talks, through a partnership among @ideacity, @TwitterCanada and @SnappyTV, the social video distribution platform.

Why digital projectors are the unsung heroes of home theatre