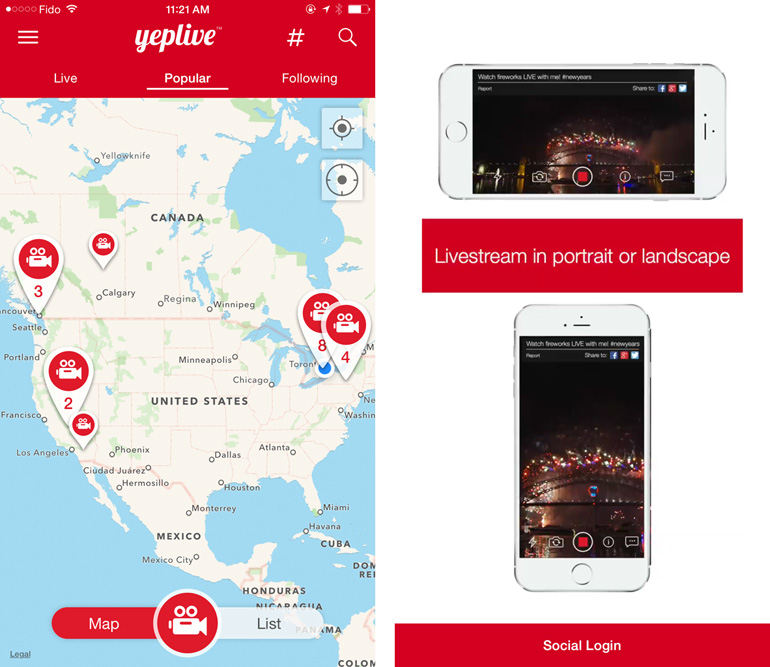 Periscope and Meerkat have popularized the concept of location-based livestreaming in a big way, and others appear to want to take a bite out of the same pie. Enter Toronto-based Yeplive, a new app aiming to be among the elite.

On the face of it, it doesn’t seem like there’s much to differentiate Yeplive from its popular competitors. You launch the app, point your smartphone at something, tap record and stream it to whomever wants to tune in. The social media tie-in looks similar, too, so what’s the deal here?

To be distinctive, it offers a few things that aren’t in the other two. A livestream, or “Yep,” can be captured in landscape mode, on top of the standard portrait mode. Live Yeps are laid out as red pins on a map for users to browse. After staying up there for 24 hours, the Yeps are then archived to each user’s account.

As expected, viewers can comment while watching, and can also share in real-time to Facebook, Twitter and Google+, with Instagram reportedly coming soon. A search function embedded in the app makes Yeps searchable by hashtag, title or location. Three filters at the top break them down by what’s popular, trending locally or what your friends and followers have posted.

Sharing to Facebook in real-time may be the big one, since it adds more timeliness to a post at any given time. Shooting in landscape is one that many would probably appreciate, too. Still, these extra pieces, while missing from the two leading apps, are likely coming to Periscope and Meerkat in future updates anyway, so the overall experience of using Yep has to stand out.

While we haven’t had the chance to fully review it, we did get some hands-on time to gauge what it can and can’t do. As with any app that starts out, Yeplive is devoid of many users, so Yeps are largely concentrated in Canada’s major cities, with the odd one here and there in the United States. We didn’t see a single one go live from any other part of the world.

The lack of content is understandable at such an early stage, so we focused more on the act of livestreaming. The fundamentals here aren’t all that different. We could type in a title, choose to share it on whatever social media platforms we had signed into, tap the streaming button and go from there. It’s typical point-and-shoot, with the exception that we could go landscape from the start. Switching to the front-facing camera or turning on the LED flash on the rear was just a tap away, too.

Quality is only as good as the phone one is using, plus the upload speed with which it pushes it up to the cloud. Both depend on the device and network, but in either case, neither should be a particular issue. We didn’t actually share to Facebook because we had nothing of value to shoot yet, but that self-restraint may be an anecdotal example of how users might choose to stream live to Facebook. Or maybe not. Considering the minutiae that tends to fill home feeds nowadays, we’re not banking on that.

The map is arguably the most fun navigation method Yeplive offers, but the most efficient is naturally searching for a subject or hashtag. The filters also help, though without a greater volume of streams to look for, it’s still too early to assess that fully.

Despite being a new trend with a few apps running in pole position, Yeplive has an uphill climb ahead of it. It will be interesting to see if the masses start taking to it to help push it forward.

Yeplive is available now for free on iOS and Android.