The new movie Star Wars: The Force Awakens opens just before Christmas, on Friday, December 18. And already, you’d be hard-pressed to visit a store – regardless of what it sells – and not find some sort of related paraphernalia on display.

One of the hottest (and coolest) categories of products relating to the iconic flick is, not surprisingly, tech gear. And there’s no shortage of options, from the popular Sphero app-controlled version of the BB-8 robot, to even a Death Star waffle maker. Here are 5 ones worth grabbing for the Star Wars lover on your list. 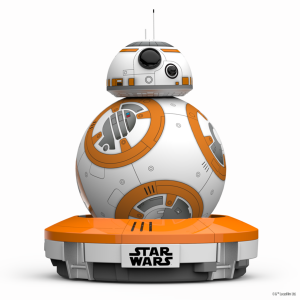 If you’re familiar with Sphero, you know they make a line of rugged, ball-shaped toys that you can control with your smartphone, making them roll and twirl around on the ground, even navigating through augmented reality video games. The company snagged a massive deal with Lucasfilm to develop a version of the device modeled to look exactly like the new BB-8 character from The Force Awakens. You can give the R2-D2 2.0-type robot voice commands, or control it from your smartphone or tablet (Android or iOS). Not only will it move, but it will also display a range of expressions. And, it can be used to capture holographic videos. With each charge using the included induction dock, you’ll get about one hour of play time. $150 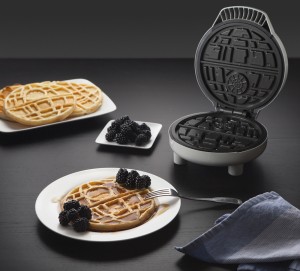 “Come to the dark side; we have waffles.” This is what accompanies the advertisement for this product, which got a ton of media exposure when it was released earlier this month. It’s pretty well your standard waffle maker, but with a twist: it will create the breakfast treats in the shape of a fully-detailed Death Star. Fans are no doubt salivating over the scrumptious breakfasts it can. Kids and adults, alike, will surely be hungry for this one. $40 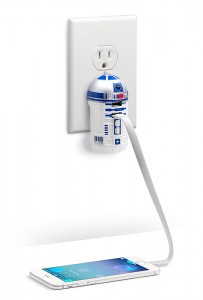 It’s clear that ThinkGeek is a repository for all things Star Wars tech-related. And this USB wall charger is further evidence of that. Plug the miniature R2-D2 figure into your AC wall outlet, then use its two USB ports (one 2.1 Amp and the other 1.0 Amp) to recharge your mobile devices. It’s genius, when you think about it. Who better, after all, to power up your gear that the faithful sidekick robot? $30, but due to licensing issues, the site notes that it can’t be shipped outside of the U.S. If you have friends stateside, though, they’d surely appreciate one appearing on their doorstop, just in time for Christmas. 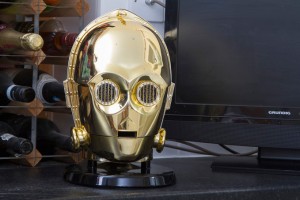 This product was so popular that it only took two days on Kickstarter for the company to pull the campaign after reportedly receiving interest from a major investor who was willing to give them all of the funds they needed to proceed with creation. Having received licensing from Lucasfilm and Disney in order to re-create the heads of two popular characters from the movie – C-3PO and the Storm Troopers – certainly helped. Each can function as talking Bluetooth speakers. C-3PO will say one of his iconic phrases, “I do believe they think I am some sort of god” once you successfully pair it with a mobile device. The premium look, versatile functionality (use them as both speakerphones or simply portable speakers, connected to a smartphone, tablet, or computer), and supposed awesome bass (ACWorldwide says it’s loud enough to “drown out a Wookie battle cry”) make them a clear winner. At the time of the campaign, they were to sell for about $150 each. They may not be available in time for holiday season, but an IOU for this one may be all a gift recipient desires for now.  Readers can pre-order. 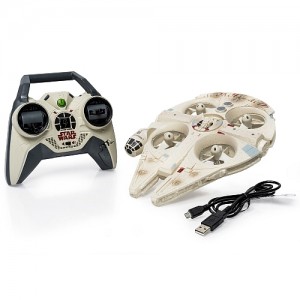 Why get an ordinary drone? This kid’s toy (or maybe adult’s?) is shaped exactly like a small version of the Millennium Falcon. It comes equipped with four quad rotors concealed in the ducts of the ship. Control it using the included remote, which communicates with the flyer via the 2.4GHz spectrum. You can fly it from up to 200 feet away. Though it is recommended for indoor use, you should be able to give it a whirl in your own backyard – just be mindful of the safety rules around flying unmanned aerial vehicles (UAVs) in Canada. Adding to the Star Wars experience are lights and sounds that are authentic to the movie, including the engine noise and LED thrusters that light up as you ascend. It requires six AA batteries, so grab a pack to go with the gift so fans can get flying right away. $110