According to NetMarketShare, Google accounts for more than 67% of the global search engine market, making it, by far, the dominant search engine. But did you know that, aside from basic Web searches, there are some cool tricks you can perform with Google?

This is a simple one, but one that many Web surfers don’t know exists. If you type quotation marks around multiple search words, Google will look for results that include those two words together, in that order, versus just results that contain both words. This works great for a specific person’s name who might not be that well known, or might contain two common first names (e.g. Michael Anthony); or phrases that might yield tons of results when each word is taken on its own. 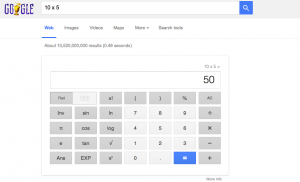 2.It will do math equations for you

Forget the calculator. Just type in a simple math equation (e.g. 10 x 5) and Google will bring up a calculator with the answer. You can then use that virtual calculator for more complex calculations if you like – great if you don’t have a physical one handy, or don’t have your phone with you.

3.It will do conversions

The same goes for various types of conversions, like mass and temperature. Punch in “71 degrees Farenheit to Celsius” and up will come a converter that advises of the temperature equivalent. Or, ask it how many pounds are in 20 kg and voila!The same converter appears, this time showing mass.

4.Ask what pretty much anything is

Don’t know what the word “omnipresent” means? Just start any search with the words “what is” and Google will display a dictionary definition as the top result. Or unclear about to what exactly “the cloud” refers?Ask about a specific term like that and a result will display from a reliable source, definingit. For example, when typing in “what is the cloud,” an explanation of the term as it pertains to modern-day technology is highlighted from tech Website Mashable.com, within its Beginner’s Guide to the Cloud. 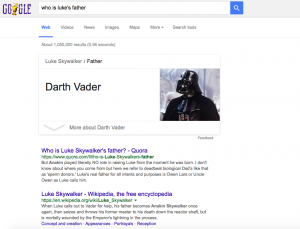 In perfect time for the upcoming Star Wars movie, did you know that Google has a special set of search algorithms for fans of the iconic film franchise? As of May 4 this year (known as Star Wars day, “May the Fourth be With You,”) Google added new knowledge graphs that show fans everything they need to know about the show and its characters. And you can even ask questions. Type in “Who is Luke’s father” and up pops (spoiler alert) the answer: Darth Vader, with a drop-down arrow to learn more about the Sith Lord. Want to know how old Yoda is? According to Google, 900 years.

6.Six degrees of every actor

Ever heard of the hilarious “Six Degrees of Kevin Bacon” game? Essentially, the premise is that actor Kevin Bacon can be linked to any

other actor within six or fewer degrees of separation between them. Don’t believe me? Punch in any actor’s name followed by the words “bacon number,” and Google will detail their degrees of separation. Jim Parsons from the Big Bang Theory, for example, is only two degrees away from the Footloose king: he appeared with Steve Martin in Home and Martin appeared with Bacon in Planes, Trains, and Automobiles. Not only is this feature clever, but it can get rather addictive trying to stump the theory with every actor imaginable.