Reports from Rio de Janeiro in advance of this summer’s Olympic Games rightly highlight many of the troubles now facing Brazil. Based on reports of a dysfunctional government ruling over an oft-disenfranchised people, as well as the infectious diseases and dirty waters plaguing the region, people have speculated that the Games might be delayed, cancelled or moved. 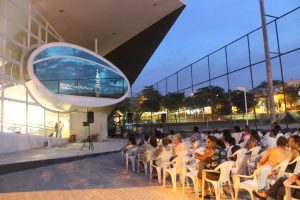 An outdoor movie screen at a Knowledge Ship.

None of that is likely to happen, however, and the country, its people and its largest city will hopefully come out of the experience stronger and more able to deal with the future it’s facing.

One sign that this is in fact happening: a prestigious international award presented by the Intelligent Community Forum to Rio, honouring a high profile and high-tech initiative there called Knowledge Squares. 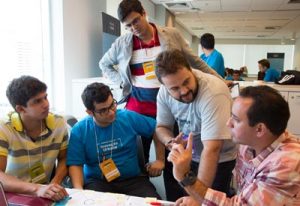 Community leaders and participatory democracy advocates in Rio de Janeiro hope that access to digital data and maps of surrounding neighborhoods will foster more interaction with and suggestions for city government officials.

These high-tech-enabled, publicly-accessible centres have classrooms, labs, digital libraries, recreation areas and other facilities so that young people and local community members can get skills training in IT, robotics, graphics, mobile app development, Web design and video production.

The Knowledge Squares program was driven by Rio Mayor Eduardo Paes and its Chief Information Officer Franklin Dias Coelho as part of a larger program to target and eventually reduce the extreme level of income inequality in Brazil.

“One of the project’s main goals is the creation of a knowledge network designed to ensure that Rio becomes more advanced in digital literacy in education, entertainment, services and training,” Coelho said. “It’s about democratization of knowledge through allowing people access to the Internet and distance learning tools.”

The one Knowledge Square built so far, and five satellite offices known as Knowledge Ships, are located throughout the city; there’s even a Knowledge Mother Ship – about twice the size of other facilities – leading the way as plans calls for some 40 high-tech centres to be open by the end of this year, with no more than a 15 minute walk for residents to reach one of them. The spaces are open on weekends. 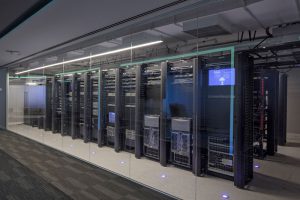 Working with companies such as Cisco, IBM, Intel and Embratel, Rio’s Knowledge Squares are a complement to the city’s high-tech Operations Center.

Community leaders and participatory democracy advocates hope that access to digital data and maps of surrounding neighborhoods will foster more interaction with and suggestions for city government officials.

All manner of educational programs and opportunities will be offered, including classes on digital literacy, entrepreneurship, English for business and tourism, as well as product or service specific classes, such as offered by the Cisco Networking Academy. 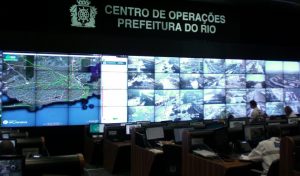 Hundreds of different layers of data are aggregated and analyzed from various areas of the city at the Rio Operations Center.

Working with companies such as Cisco, IBM, Intel and Embratel, Rio’s Knowledge Squares are a complement to the city’s high-tech Operations Center, part of the decade-old Smarter Cities initiative promoted by IBM. The Center is described as a paradise for data geeks: the amount of information displayed on its 300 screens is impressive, starting with the images streamed from 600 traffic cameras, as well as from water and rain gauges, private maps, traffic signal data, the electricity grid, traffic controls, public transit vehicles, and social media feeds such as Twitter and Waze.

All told, there are 250 different layers of data that are aggregated and analyzed from various areas of the city, opening new opportunities in operational, control and management of needed services and citizen support infrastructure.

The initiatives in Rio have not gone unnoticed in the broader tech community. As noted, the Intelligent Community Forum (ICF) has presented a major international award to the project managers, with ICF co-founder John Jung calling the digital spaces “one of the most dramatic and extensive opportunities to provide digital inclusion … anywhere I have ever seen.” 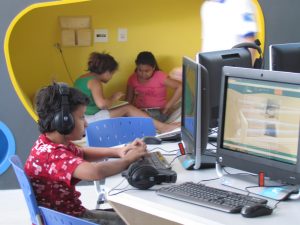 Children using computers at a Knowledge Ship in Rio.

The Knowledge Squares award was presented to Rio city officials at the 2016 Intelligent Community Awards Dinner, held earlier this month in Columbus, Ohio (that city was a previous ICF award winner, as was Toronto).

Also presented by ICF in Columbus, the 2016 Intelligent Community of the Year Award, to Montreal, QC.

For the largest French-speaking city in North America, the award was a culmination of work that has been underway since the city introduced a Smart City plan in 2011.

Just don’t ask anyone there about any Olympics.