Sure, three rooms in the arcade are equipped with the latest HTC Vive VR system, each with a VR headset worn by individual players. But each room at The Grid VR Arcade in Regina, Saskatchewan also has large screen TVs mounted on the wall so that other people in the room can see (goggles-free) what a hands-on player is seeing in their VR headset. 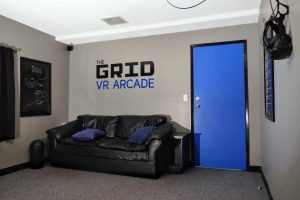 With as many as four people in each room, the VR experience can extend a one-on-one VR gaming session into a shared social experience. In fact, two of The Grid’s VR rooms have a window between them which can be opened up so a group of eight people can talk to each other and see what everyone is doing.

Of course, comfy couches and a concession stand help position the VR arcade as a fun way to spend time with family and friends, but there’s more at play here.

That’s how Rob Bryanton sees it – he’s president of Talking Dog Studios, the Regina company that owns and operates The Grid VR Arcade.

“You have to experience it to know what it’s all about – what we are talking about here is essentially the Holodeck. Users will be plunged into an immersive 360 environment for an experience like no other,” he describes with real, not virtual, enthusiasm.

And while many of this Arcade’s customers so far are already into gaming culture and may have VR systems of their own at home, none likely have the large ‘playing surface’ of The Grid, with its high ceilings and wide open floor space.

“Our biggest room is wheelchair accessible,” Bryanton adds, counting the almost liberating experiences a chair-bound user could experience in virtual reality among the exciting ways to use VR.

It’s not only gaming and entertainment, of course: corporate applications like team-building and VR white-boarding; lifestyle activities including low-impact fitness and relaxation exercises; academic education and training, and more. 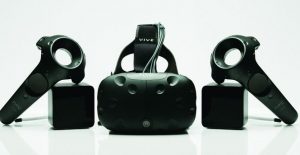 Bryanton says the Vive VR system was chosen for The Grid for a couple of reasons: “The nice thing about it is it allows users to walk around freely, turn in a circle, squat down to look under things, and so on. As soon as we were able to get a Vive system here, it was abundantly clear that the full 360-degree freedom of motion … makes it a whole different animal from the other VR systems out there and that includes the new Playstation VR. Plus, the need for a big open space with no coffee table to trip over (or what have you) led us to the conclusion that a nicely configured set of rooms could be a popular place for people to come in and have some VR fun with their friends.”

The space hosts VR games on Thursday and Friday evenings, and on weekends and holidays. There’s a fixed rate fee – $59.95 for a one-hour-fifty-minute session – which when split among four players is not much more than heading out to a movie. 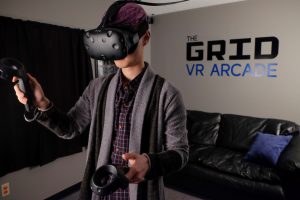 Called the first arcade of its kind in western Canada, The Grid is all about experiencing the latest in cutting edge technology: Virtual Reality.

“We’re limiting admission to 14 and older, and anyone younger than 18 wanting to attend by themselves must bring in a waiver signed by their parent/legal guardian. Why? Because you’re about to walk around in a room with your eyes covered. The Vive system superimposes a grid into the headset view as you approach the boundaries of the safe space, so you would have to ignore that warning to end up walking into a wall or tripping on a couch, but we do want people to be aware there’s a certain amount of risk they are assuming when they put on that headset.”

For The Grid VR Arcade, Talking Dog developed and implemented its own Launcher interface, which allows the player wearing the headset to select and quit their own games in a self-contained environment that doesn’t force them to head back out to the Windows environment.

(If you recognize the Talking Dog Studios name, then you’re likely a fan of the hit Canadian comedy TV series, Corner Gas: Talking Dog created the music and was responsible for audio post-production on all six seasons of that show, as well as other popular movies and TV shows. Now, the company has expanded its digital media service offerings by producing interactive content for augmented, virtual and mixed reality projects and diverse clients such as Legendary Pictures, the Mayo Clinic, and the RCMP.)

The Launcher program Talking Dog developed not only makes the VR arcade experience smoother and easier, it means the company is being contacted by folks who want to license the Launcher for use in their own arcade-type gaming initiatives.

The Grid’s Launcher library currently features eight titles, with the zombie game Brookhaven Experiment and the fun Job Simulator getting the most play in its first few weeks, with other titles in the Launcher offering other types of experiences – there’s a 3D painting program, Mini-Golf, an arcade style shooter, a fanciful construction game, and more on the way. 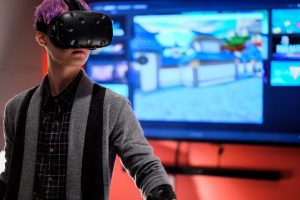 The Grid has three rooms that each allow up to four people to get into an immersive 360-degree environment using a HTC Vive VR system.

“Imagine a seminar where the facilitator is able to use the entire room as a whiteboard space, jotting down notes, finding connections, stimulating conversation. Imagine a dancer creating artwork within the 3D space, leaving behind shapes that describe their motions. Imagine creating a story where you move from sculpture to sculpture, advancing the narrative with whatever shapes you’ve designed.

“The program even has a movie function where you hold your controller up like a camera, walk around within whatever you’ve constructed, and end up with a shareable recording you can post to YouTube or Facebook – it is an amazing and powerful tool!”

OK, so call The Grid VR Arcade a workshop, too.