Disruptive new immigration bans and restrictive visa proposals in the U.S. are said to be a boon for the Canadian tech scene, with observers anticipating a growing flow of skilled workers to this country who can’t, or won’t, head to the States.

Yet cross-border collaboration in the two countries’ tech industry is not going away. New initiatives are in place to tighten the relationship between Canada and the U.S. by boosting cooperative research and development, sharing human and financial resources, and even establishing faster travel options for those workers who can freely cross the border.

Good news for those who want to build bridges, not walls.

One example – the creation of a tech corridor running between Washington state and British Columbia that will help grow the high-tech, life sciences, clean technology, and data analytics industries on both sides of the border.

The Cascadia Innovation Corridor runs between seemingly already established industrial sectors in cities like Vancouver and Seattle (the former with its creative sector; the latter with its tech infrastructure).

But civic and business leaders from both sides of the border think that partnership and collaboration can expand economic opportunity beyond what each community can achieve on its own. 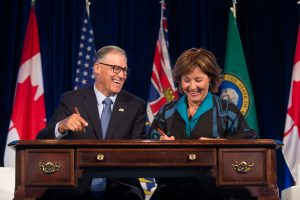 So, too, Microsoft. The tech giant (long a resident in Washington of course; the company also recently announced its Microsoft Vancouver initiative) is fueling new connections along the Cascadia Corridor with $1 million in cash.

Its investment in the Cascadia Urban Analytics Cooperative (CUAC), itself a joint effort by the University of British Columbia (UBC) and the University of Washington (UW), will be split between and managed by the two institutions as they develop new data gathering and analysis tools to tackle urban issues including transportation, housing, and climate.

Project officers believe data science can be used for broad social benefit in an urban context, helping researchers identify valuable actionable information that contributes to the long-term health and prosperity of smarter cities.

So both UW and UBC will be running a Data Science for Social Good program this summer.

Researchers, academics, students, and public stakeholders will be looking at the vast data generated in large cities, and hopefully accelerate research and development in cooperative facilities such as UW’s Urbanalytics Studio, a partnership between the UW eScience Institute and Urban@UW, and UBC’s Data Science Institute and UBC’s Sustainability Initiative.

Sharing ideas and resources underpins the efforts of this cross-border initiative. As does the sharing of data, which can be easier said than done. 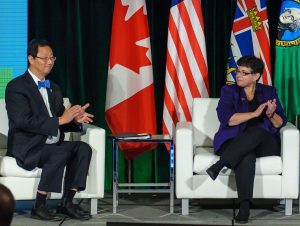 Project officials acknowledge there are issues around transferring data across the border. They say any projects involving private data will adhere to local laws and ethical frameworks set out by the institutions. This summer, some projects that involve similar data on each side of the border will consider a comparison of those data sets when allowed. For instance, officials describe, some data sets may be opened by city and other not-for-profit partners.

Likewise, participants say they are committed to widely sharing and openly publishing the results of their research, as set out in existing university policies and mandates.

The Cascadia project means people and cities are talking to each other, across borders and not at cross-purposes.

The Cascadia Innovation Corridor is getting Seattle and Vancouver to talk to each other, according to The Economist. Civic and business leaders from both sides of the border think that partnership and collaboration can expand economic opportunity beyond what each community can achieve on its own.

New thinking and technology for the future of retail

Reviewing the Samsung Galaxy A5