How many times has the easily avoidable become a costly embarrassment?

Forgetting your significant other’s birthday is one thing – making an outrageous statement on social media yet another.

But when the embarrassment stems from a major corporate computer systems failure, well, the costs are enormous, the recovery is lengthy.

And yes, the issue is avoidable, even predictable.

British Airlines recently suffered yet another IT systems outage, apparently caused by a major power surge at its data centre: the airline’s website and mobile app went down; its check-in, baggage and boarding pass counters were dark; and its passenger community was outraged.

In any multi-billion-dollar business that depends on full two-way connectivity – from airlines to banks to coffee shops and more – multiple data centres with multiple redundancies for power, storage and especially data throughput should be part of that company’s IT strategy from day one.

That’s surely the way the folks at Cradlepoint see it: the company has made it its mission to provide high-speed, cloud-based networking solutions and robust fail-over capabilities so enterprise customers can keep operating seamlessly and not lose money should their traditional wired service go down.

The U.S.-based company has recently come to Canada, with big plans to provide software-defined networking technology, networking services in remote or hard-to-serve locations, and fail-over capabilities for fixed retail and corporate locations. 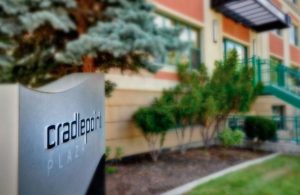 Cradlepoint, a U.S.-based company, has recently come to Canada and taken up residence at a new technology incubator and development centre in Kelowna, B.C.

Wireless access to the Internet as a back-up or redundancy means a company can still accept and process credit cards purchases, for example, even when its main wired system is down. Using his cloud management system and corresponding APIs, says Lindsay Notwell, Cradlepoint’s VP, Carrier & International Business, a user can manage the main network and a virtual back-up system through “one pane of glass.”

“Three forces are behind the perfect storm now driving massive change in networking strategies and tactics,” Notwell describes. “The power of cloud resources to deliver software updates, and data processing, storage and analytics; the increased business need for mobility and for information and communication services anywhere, anytime; and the need to provide online connections to billions of new ‘things’ on the Internet.”

So network connectivity is fast becoming a cloud-supported service, and even virtual wireless technologies, with remote software update and monitoring capabilities, are a viable alternative for many hard-wired businesses.

The fact that wireless transmission protocols are speeding up tremendously doesn’t hurt: faster data throughput from standards like enhanced LTE, 4G and soon 5G lets Notwell talk about the “wireless fibre” advantage of increased speed and reduced latency of all-IP data transmission. (Full-up 5G networking should make it possible to wirelessly support connected cars and autonomous vehicles – if we can map out a safe route for them to take.)

Cradlepoint offers up a range of hardware solutions – routers, modems, multi-standard SIM readers and the like – but also a suite of cloud-based services, with malware protection, content filtering as well as other operational and security features.

Cradlepoint offers up a range of hardware solutions – routers, modems, multi-standard SIM readers and the like – but also a suite of cloud-based services, with malware protection, content filtering as well as other operational and security features.

Having taken up residence at a new technology incubator and development centre in Kelowna, B.C., and with nearly $90 million in new funding, Cradlepoint is looking at continued growth and expansion for its business here.

“Canada is a very important marketplace for us; the country is under-indexed,” says Notwell, “and that’s a great opportunity for us. Yes, foreign exchange is a challenge, but the costs (to a corporate client) of redundancy and fail-over protection justify themselves if the alternative is going out of business – even temporarily.”

Another challenge in Canada (or any other international location) is to maintain compatibility with different jurisdictional and technical standards.

And just who might use those services? Today’s businesses need the fail-over protection, and high profile Canadian organizations such as Tim Hortons, Lush Cosmetics, Enbridge and the Canadian Department of National Defence are already clients.

But tomorrow’s businesses may need to add virtual bandwidth in order to wirelessly manage anything from interactive virtual reality programming to remote-controlled robotic surgery.

OK, so it’s not a real business as yet – but as part of a technically challenging promotion and branding exercise, a Dubai-based radio announcer originated his show three metres down in a giant aquarium tank, surrounded by sharks, stingrays and other marine animals. 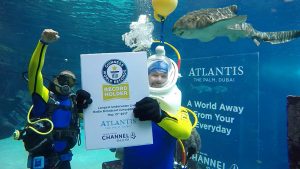 Who knew there were underwater broadcasting records?

The show demanded a high level of technical support and broadcast was made possible by Cradlepoint technology, with a powerful router providing connectivity between the radio studio and the underwater broadcast location. And an older, uninterrupted uptime radio broadcast record originating underwater record (who knew there were such things?) was broken with a new record set.