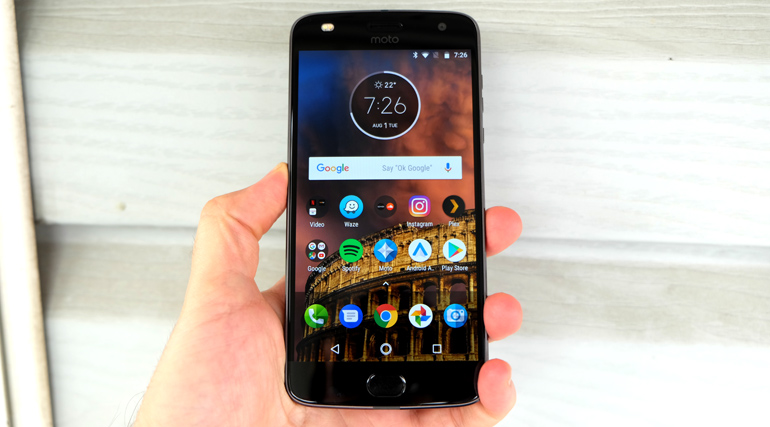 The Moto Z2 Play is one of the few smartphones that can be augmented by add-ons, or Mods, that click onto the back, physically enhancing a certain feature on the device itself. Is there enough in this device to get people connected to the wider ecosystem?

It’s a grind for Motorola in Canada these days. Though sales numbers aren’t publicly known, the brand would certainly like to make further inroads. This, despite the fact the company makes quality devices and runs one of the cleanest versions of Android outside of the Google Pixel handsets.

The Moto Z2 Play is a successor to last year’s Moto Z Play, a device that fell in the upper mid-range at $650 outright. It lacked the thinness and processing power of the flagship Moto Z, but its durability and dependability made up for the shortfall. This year, the Z2 Play is currently the strongest handset Moto has launched in the Great White North.

I rarely find myself griping about a design choice Motorola has made. The build and construction are always tasteful without trying to be gaudy. The Z2 Play has a nice subtle brushed metal back, with darker grey edges accenting the frame.

Some might not like the way the camera lens protrudes out from the back, but it was the only way to make the phone thin and squeeze in the optical components necessary to take photos. The magnetic connectors at the bottom are where the Mods attach in the back. Beyond the basics of power and volume buttons, headphone jack, USB-C port and SIM card slot (with microSD slot for memory expansion).

The fingerprint sensor in the front doubles as a navigation tool to get around the phone, thus replacing the regular soft keys. Alternatively, you can turn off the gestures and use the soft keys appearing above, relegating the sensor to little more than a way to unlock the screen.

In going with a 5.5-inch 1080p HD resolution for the display, the Z2 Play is playing in the mid-range, though the lack of extra pixels doesn’t hurt its visual flair. The Super AMOLED display reproduces colours well, but also slightly exaggerates them, as these types of screens sometimes do. I had little to complain about when viewing anything on it though. 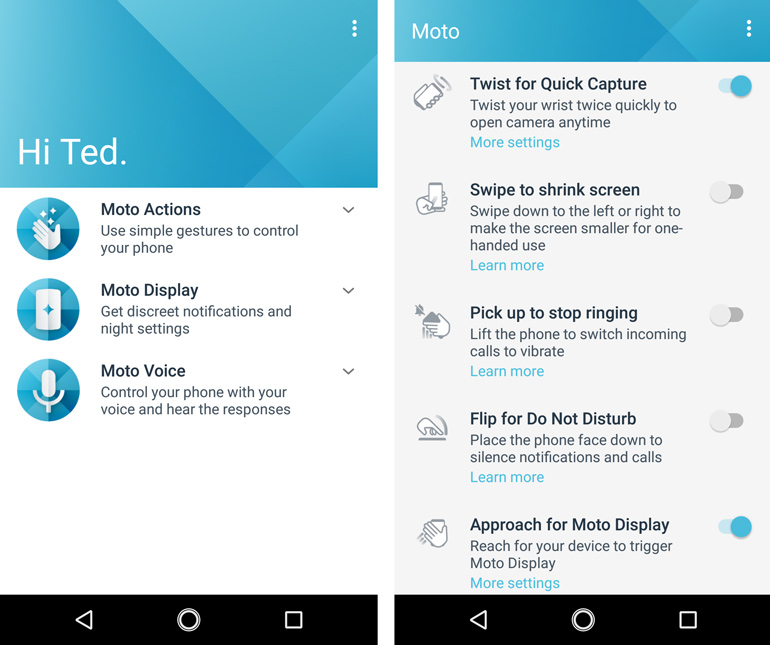 The Snapdragon 626 octa-core processor is a workhorse made for mid-range handsets, and it should work with little incident when it comes to moderate usage. The 3GB of RAM is serviceable, and because the screen is 1080p rather than a higher resolution, it doesn’t tax resources as much.

All of that is helped by the vanilla Android experience Moto has pursued going back to 2013. Next to the Pixel phones, this is probably the closest there is to a pure representation of the operating system. Practically speaking, it makes it much easier to wade through the OS without having to deal with any overlays. A side benefit is that the stock version of Android takes up less storage space than one with a manufacturer’s overlay.

The same Moto-centric gestures still apply here. Twist the phone in hand and the camera launches automatically. Shake the phone and you turn on the flashlight. Moto Voice is back, allowing for limited voice control, though Google Assistant works too, and it goes way further in capability.

This is a phone made for the moderate user. Whether it’s playing games, streaming content, being active on social media, video calling or taking photos, the Z2 Play handles mixed usage quite well. It’s not a beast, in the sense that it won’t outperform a more powerful phone, but it held up as well as I expected.

Battery life is an interesting one because it turns out the Z2 Play (3,000mAh) has a noticeably smaller battery than its predecessor (3,510mAh), which does affect how long it lasts per charge. It’s not a massive downgrade, and the phone can certainly still go strong for a full day, but it’s a trade-off one must accept if upgrading from the previous model. 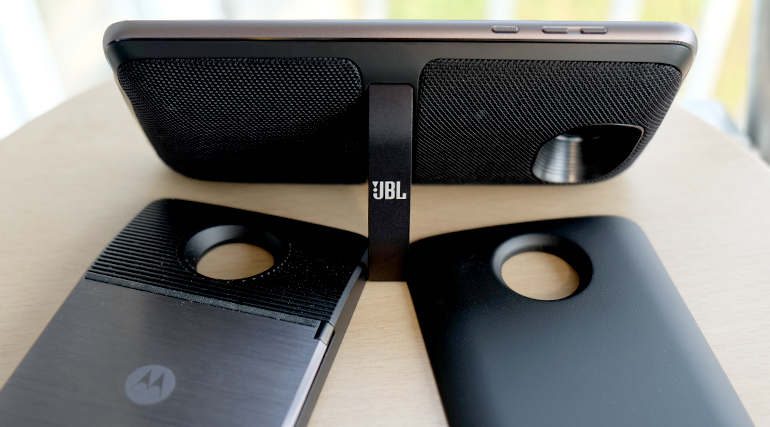 I like the idea of smartphone modularity, and the Moto Mods are the best conception of that to date. Whether or not they will garner enough interest beyond this year remains to be seen. Moto wisely stuck to the same design principles, allowing Mods purchased last year to work just fine with the Z2 Play.

New ones are also in the mix. I tested the phone with the TurboPower Pack, a $100 Mod with a 3,490mAh battery inside that easily doubles the phone’s charge. With it on, I didn’t have to charge the Z2 Play for two days.

Then there was the $115 JBL SoundBoost 2, a successor to last year’s original, which is essentially a speaker for much improved audio. The one I’m really waiting to try is the GamePad that is expected to launch in the coming months.

The previous Mods worked just fine here too. The Hasselblad camera (I would like to see a successor to this) and InstShare Projector (one with a longer battery would be great) were fine. 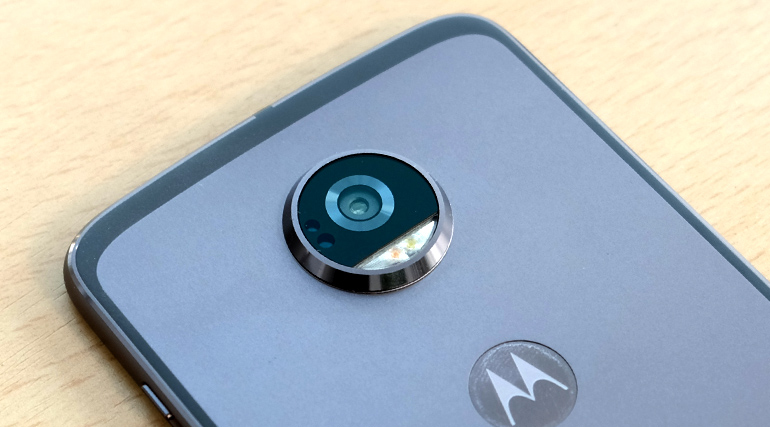 I recognize this is a mid-range device, but Motorola does need to raise its game on the camera front. The wider f/1.7 aperture allows plenty of light to filter through to the image sensor, except image composition lacks detail. I appreciate that Motorola chose not to use software trickery to manipulate image sharpness, but the lack of detail is partly because automatic exposure can blow out some shots, and there’s no optical image stabilization.

The Pro mode allows for some manual control to better compose a shot ahead of time, which I prefer to shoot with, personally. Either way, the results are very much in the mid-range, which is that they’re going to be fine for quick point-and-shoots, but don’t break the mould to truly impress beyond expectations.

The Moto Z2 Play costs $750 outright in Canada, and until Dec. 1, it doesn’t even come unlocked. Bell, Freedom and SaskTel are already carrying it, and initial deals bundled the phone with the JBL SoundBoost 2.

The price stings for a couple reasons. First, the same phone is $400 outright in the United States. Second, it creeps up a little too close to the flagships. The Huawei P10 and P10 Plus, which each sport better cameras and better specs, are in the same price range, for example. A Samsung Galaxy S7 or Google Pixel could still be had for less too.

It’s unclear if the price will drop soon, but if you have U.S. dollars and can buy it south of the border, you will save money, especially based on the exchange rate as it was as of this report. The Moto Z2 Play is a solid mid-range phone with dependable performance, but the price becomes a tough to accept, especially when adding the costs of one or two Mods on top of it.