Art galleries and museums around the world and here at home are using the latest digital media techniques and technologies to grab the attention of their visitors.

Can they hold on?

You’re still more likely to encounter a painted canvas in an art gallery, but the number of computer screens and interactive devices you’ll see continues to increase. The idea that digital technology can increase a gallery-goer’s access to and engagement with art is a popular and powerful one, yet it’s still controversial and contested at the same time. 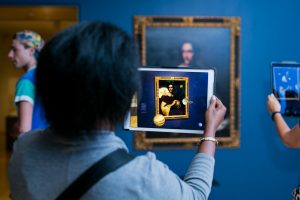 Existing works of art on the AGO walls are reimagined on the digital screen using layered 3D imagery, real-time video mapping, sound and audio effects, and a degree of interactivity that can also make the user a part of the picture. Image courtesy Art Gallery of Ontario.

A digitally-mediated exhibition now on at the Art Gallery of Ontario tackles these ideas head-on with an imaginative mash-up of old art and new technology. Looking at selected artworks through a newly developed augmented reality smartphone or tablet app, visitors get a second look and a new perspective on a painting and its subjects.

The app (and the exhibition) is called ReBlink; through it, existing works of art on the AGO walls are re-imagined on the digital screen, using layered 3D imagery, real-time video mapping, sound and audio effects, and a degree of interactivity that can also make the user a part of the art.

Created and developed by Alex Mayhew and the production and development team at Impossible Things, a Toronto-based digital media company, the free AR app can be downloaded to iOS and Android devices, and it’s been loaded onto tethered iPads that are mounted in the gallery space.

As users hold the tablet up and point it at a designated ReBlink artwork, they see (and hear) new content, not replacing the original art but adding to it. The new sights and sounds are superimposed over the existing canvas in order to create an entirely new piece of work on screen. 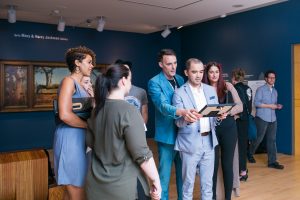 “AR allows us to look at the painting through a new lens,” describes digital media producer Alex Mayhew, seen here showing visitors how to get the best experience from the AR app his team has developed. Image courtesy Art Gallery of Ontario.

“AR allows us to look at the painting through a new lens,” Mayhew describes. “It provides a new work of art, and I would argue they both can stand on their own. There’s a tension that comes from the differences between the two, and in that tension lies a new form of expression, a new way to tell stories.” 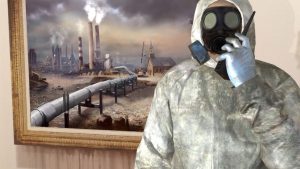 Compressing time and extending space are among the new storytelling techniques: don’t be surprised to encounter men wearing shiny hazmat suits, talking in hushed terms into walkie-talkies as they seem to eyeball your every move. And watch out for glamorous socialites from one hundred years ago waving selfie sticks! Both are part of the ReBlink app and in-gallery experience. 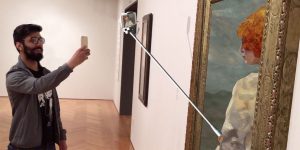 The digital storytelling continues as the user moves about in the space and looks at the art from new physical angles or perspectives. Using the tablet or smartphone as a guide, you can ‘peer’ over a brick wall in one painting, or behind the main subject in another. Take a step to the right or the left, and the art may well change as a result. The viewer is part of the art in that way, and the art itself is incomplete without such interaction. In fact, the AGO is putting floor stickers down to encourage visitors to step outside their comfort zone.

“Yes, there are some ‘hidden gems’ in there,” Mayhew nods. “The more you move, the more you get. It is a new kind of interaction, so the viewer is no longer just a viewer, but an active participant.”

Part of the reason any gallery or museum gets involved with digital technology is to have the visitor be more engaged, and spend more time there. Studies indicate the average time a gallery patron spends in front of a piece of art is like 17 or 18 seconds!

So, it’s likely using the app itself will extend that time: just exploring the layered imagery and walking around the gallery space will help; so too the features of the app itself take time, what with the large high-resolution image files to manipulate, real-time video sequences to layer, and location and object recognition processing going on.

(Mayhew says the app runs best on faster devices, including later versions of the iPhone and iPad, the Samsung Galaxy S6, LG’s G4, the Nexus 9, or Nvidia Shield K1.)

Data gathered from digital media tools like those in play for the ReBlink exhibition will let Mayhew and the gallery and museum community see visitor engagement levels in a whole new way, too, as the tools can be used to track users’ time spent and analyze app usage patterns.

The app also lets users take pictures of themselves embedded in the artwork and share those snaps with friends and family, potentially extending both the time spent in situ and the art-engagement factor.

Mayhew is well aware of the possibilities and the controversies that swirl around the use of this app in particular, and the general use of technology in galleries and museums.

“There are those asking, ‘Who are we to take these artists’ works and change them?’ ‘Who are we to interpret or re-interpret the originals?’ But this (new art application) comes from a place of love for the art, and we take care to do the art justice with high production and aesthetic values.

“And yes, there’s a contradiction in the fact we are using mobile technology. We know it seems to speed up media consumption and shorten attention spans, and it is ironic that we want to use it to get people to slow down, stop, have a longer look around.” 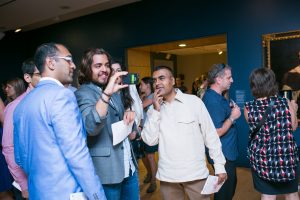 Visitors tap into the ReBlink app during a recent First Thursday event at the Art Gallery of Ontario. Image courtesy AGO.

It’s clear the app is presenting a new experience for Gallery-goers, and in some ways, watching the playful interactions between app users and the hanging art as they move around the space is almost as fun as it is to actually use and experience the app itself.

But as digital media creators develop and master new ways to integrate technology with in-gallery activities and help visitors connect with art, the educational and artistic value will hopefully mix and match and eventually exceed the fun-and-games factor.

Lee Rickwood is a part-time editor and media producer at the AGO.

6 Cool Gadgets for the Hot Summer