App-based toys are interesting when witnessing kids interact with them. Add popular characters to the mix, and the interaction could become all the more invested, which is really what Sphero’s Ultimate Lightning McQueen and Spider-Man toys are about.

Sphero’s foray into the world of the Pixar animated Cars series and Spider-Man is an extension of its work on Star Wars, particularly with the wildly popular BB-8. Where that device mimicked the computerized sounds of the BB-8, both Lightning McQueen and Spider-Man talk to the kids who play with them.

The Lightning McQueen would seem like the perfect combination. It’s a remote-controlled race car that drives and talks at the same time. That it looks like a real-life replica of the animated version only adds to the cachet Sphero strived for here.

The attention to detail is impressive. Rubberized tires with treads, a charging port underneath the gas cap, a windshield doubling as a screen for McQueen’s eyes, lit-up headlights, and even a mouth at the front that moves. It’s craftsmanship with a nod to authenticity, and I imagine any Cars fan would appreciate it. 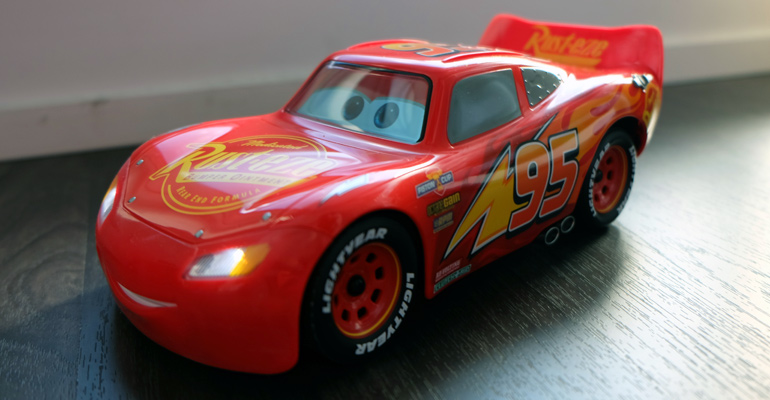 One gripe though: why is there no power button? Turning the car on required me plugging it in to an outlet. Other times, it would turn on from the iOS or Android app.

To bring as much realism as possible, the voice is on the mark, and comes from the car itself, unlike the BB-8, which used the connected phone or tablet to route audio through. The car has motors inside to emulate movement from the animated films too. For instance, its suspension will lift it up on one side or the other for emotive effect. It will lean while delivering dialogue, but also when sitting restless waiting to do something. If it’s motionless for a while, it speaks up saying it will go to sleep unless you make it move. 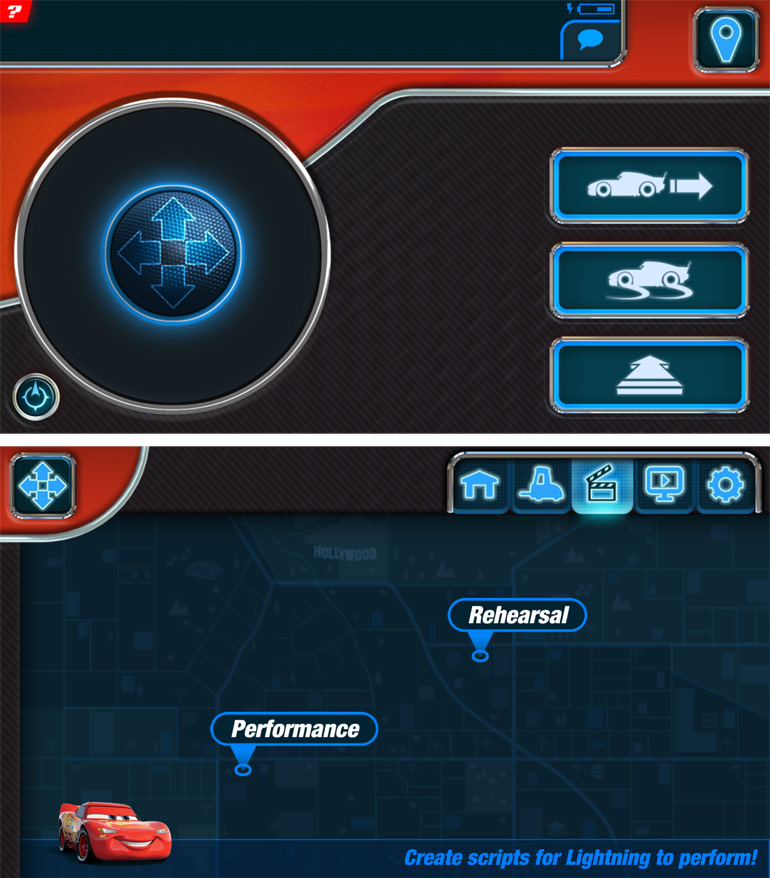 Driving the car has its pros and cons. I found it pretty intuitive when getting the hang of it, and liked that it could turn a pretty tight corner and stay straight right after. The problem was that if I drove out of sight, or drifted so that it faced me, the controls would automatically recalibrate, so that pressing left on the virtual joystick moved the car to the right instead. This is why reversing has its own dedicated button, which felt a little counterintuitive. I get that a child could get accustomed to it, but it didn’t feel natural to pull back on the joystick and not move back in unison.

Sphero claims battery life to be about 40 minutes, which is mostly true. Assuming you don’t use the speed boost often, it should hold up. Range is mixed, however. The car connects to the home’s Wi-Fi network, but the connection between the phone and car requires a fairly close proximity. Beyond about 12 metres, I was noticing the connection fizzle. How much physical or network interference might play into that is unknown to me.

Sphero added some games to the app to build on the interactive portion of the car, but I would like to see the company add more speaking lines in future updates. Since the user can’t choose what McQueen says, there is unavoidable repetition.

Despite all the trade-offs, the car is undeniably fun and I suspect kids (the demographic this is aimed at) won’t notice many of them. My only suggestion is to have your child use a phone or tablet you deem to be relatively expendable as a remote.

Then there’s the price. At $400, this is a really expensive toy to buy for any child. Mind you, it’s durable enough to keep chugging along, but you may want to supervise some of the usage, especially early on. 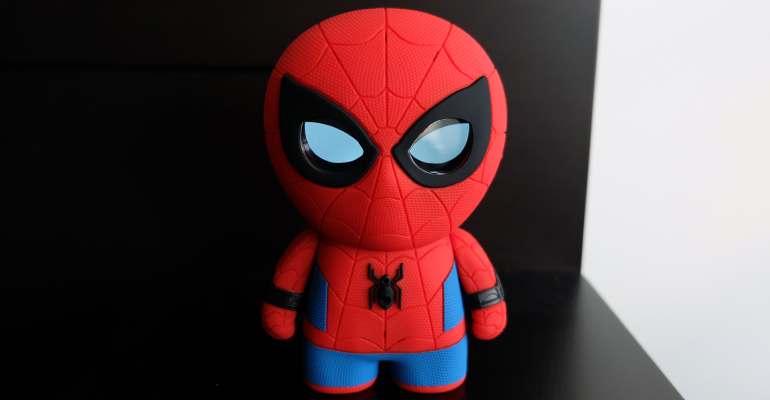 Sphero’s take on Spider-Man is considerably different because there are no motorized parts that move on their own. This toy is much more of a hands-on handheld product because it also listens for feedback, making it a little more two-way conversational.

While appearing like an oversized action figure, that’s not the real premise here. This Spider-Man toy isn’t meant to be fashioned into different poses and defeat villains who also come as action figures. Most of the time, it will rest on its flat feet, or be held without really being posed (the arms do move at least). Much of what happens otherwise is app-based, with the dialogue handling the pacing.

Screens make up the eyes, allowing it to convey emotion that jives with the commentary. It’s a subtle touch that could make all the difference for kids, who may feel like they are truly working with the webslinger in a virtual sense. The rest of the body is rubberized for better grip and to mitigate any scrapes or scratches that might occur from reckless handling. 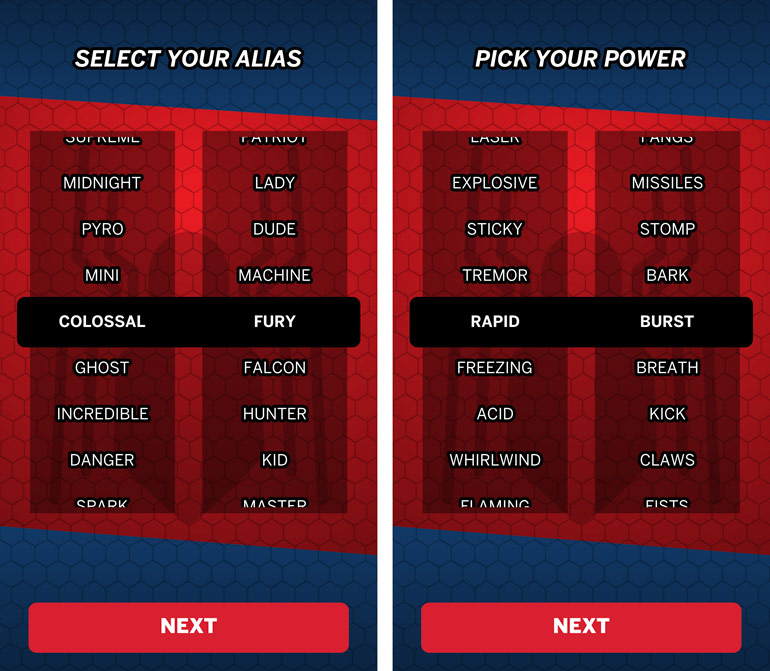 Much of the interaction uses a combination of the app, spider logo button at the front and voice prompts. The initial setup requires the user to establish his or her own superhero name by combining two from words from dual lists. From there, a single press will put the onus on the toy to select something to do, while a double-press will have it listen for a command.

There are a variety of mini-games and “training” scenarios that use a lot of back-and-forth voice interaction to move things along. It’s engaging, and young children are sure to enjoy the experience, though I came away feeling like older kids and parents would feel like they got something out of it as well.

The one caveat to this is that the toy interprets voice commands that are accurate. Using the wrong phrasing or terminology may lead to silence, perhaps causing confusion. Sphero evidently built in a failsafe by having the voice continue on after these awkward moments to avoid users feeling stuck.

I found it cute that it could act as a guard by talking to anyone entering the room, including parents, telling them to leave or warning that their kids wouldn’t appreciate the intrusion. It’s done tongue-in-cheek to maintain the lighthearted and humourous disposition of Spider-Man’s character.

Here, too, Sphero will have to deliver new content to keep things fresh because kids could rifle through much of what’s on the app in a short time. Firmware updates improve performance, while software updates to the app and toy should add new features, content or dialogue. Since the toy has only been out since June, it is a little early to expect a major influx.

Despite using such a beloved character, this is an unlikely product for Sphero, simply because it isn’t motorized to move anywhere. Kids won’t care about that, nor probably even consider the expensive $200 price tag their parents will have to pay. If they love Spider-Man, there’s a good chance they will enjoy playing and learning through this talking gadget.