So I used to proudly and confidently wear a wonderful fleece pull-over, awarded to me by a major consumer electronics manufacturer as one of those booth prizes handed out at major conventions.

I joked that beyond being warm, it was safe – no one could track me because of the threads I was wearing.

As we all know now, wearable electronics are all the rage. Be they on your wrist, the bridge of your nose, your feet, arms or torso, smart textiles and flexible electronics are literally reshaping our notions of computing and connectivity. Wearables have powerful digital components (processors, transmitters, sensors and other electronics) embedded in them, giving them extra value – if not added risk. 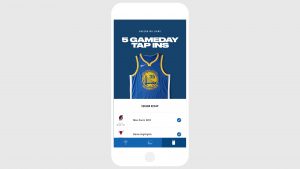 Threads, as it turns out, are trackable.

Some wearables are little more than high-tech marketing wear: sportswear giant Nike unveiled its so-called “Connected Jersey” recently; it has an embedded NFC chip and companion smartphone app that gives the wearer special access to game highlights, exclusive gear, tickets and more. Meanwhile, clothing company Levi’s teamed up with Google to offer a connected jacket with one cuff made from special yarn that doubles as a touchscreen. Maps that show the nearest clothing stores are, well, within arm’s reach.

But at a wearables event being staged in Toronto tonight, more than a dozen product developers and exhibitors are showing off wearables with a difference – they’re showing ‘good tech’ devices that help people with autism, mental health, education, blindness, deafness, personal safety and more. 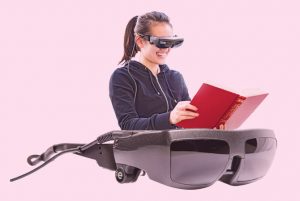 Electronic glasses from eSight enable the legally blind to see, and to conduct virtually all activities of daily living in an independent and empowered way.

Ottawa-based eSight has developed electronic glasses that enable the legally blind to see, and to conduct virtually all activities of daily living in an independent and empowered way.

The SUBPAC is a wearable audio technology that allows the wearer to feel sound. The high-tech vest converts and transfers sound vibrations directly to the user, causing their skin and muscles to feel the physical dimension of sound (there is a headphone, as well). The device opens up new opportunities for members of the deaf and hard of hearing community.

Other headphones will be shown, but the smart headphones from Mindset in Montreal were developed to improve concentration and mental performance. By monitoring electrical signals in the wearer’s brain, the device can determine whether you are concentrating or distracted. Acting as a kind of mental trainer, the system provides feedback signals and audible cues to get the wearer back on track.

Several other devices will be shown at the Tech For Good Event, as developers demonstrate the latest wearable solutions for monitoring concussions suffered by athletes, overcoming challenges encountered by people with physical disabilities, and tracking treatment outcomes for folks with brain and mental health disorders, such as autism.

The event is put on by We Are Wearables, an international community of interest with groups in Toronto, Ottawa and Montreal among those looking to build the future of smart textiles and flexible electronics. 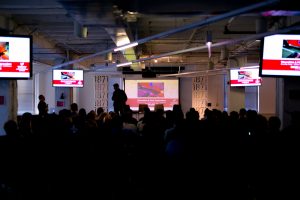 We Are Wearables hosts an event in Chicago, one of several cities in which the wearable community holds tech events and demonstrations. Photo Credit: Gregory Rothstein 1871/Spot My Photos

WAW is one of several such organizations: the Canadian Smart Textile and Wearables Innovation Alliance (STWIA) launched last year, and it has just merged with another new initiative to drive Canada’s wearables and smart textiles industry, called the intelliFLEX Innovation Alliance, along with members of the Printed Electronics (PE) industry.

“This is an exciting time for the smart textile and wearables sector in Canada, and joining intelliFLEX, a professional industry association, demonstrates the maturity of the sector,” Thomas Ducellier, Executive Director of Printable Electronics, said in announcing the new initiative. “Through intelliWEAR (the Alliance’s wearables and smart textiles accelerator program), members will be able to build bespoke programs, lobby government and help the sector scale in Canada.”