There’s a lot of talk about artificial intelligence (AI) robots and their place in the workforce. Will they be companions to human workers, or take over certain jobs altogether?

We’ve already seen everything from automated parking attendants, to vending machines doing the jobs that humans once did. Sometimes it works swimmingly, and sometimes it’s rife with complications, causing more frustration than convenience. But can you imagine checking into a hotel with a virtual customer service rep? Or ordering your lunch from a robot instead of a brooding teenager?

As AI develops further, several companies are looking at ways that they can innovate and enhance jobs (and, let’s not sugar-coat it, reduce the cost of a human workforce), whether entry-level or highly-skilled, through the use of robots.

At CES 2018, for example, LG showcased three conceptual “servant” robots in addition to its consumer CLOi robot, each of which serves a very specific purpose. The Porter Robot delivers luggage to your hotel room, and helps you with the check-in and check-out process. The Serving Robot is a waiter, of sorts, that can deliver food and drinks to you in hotels and airport lounges – no tip required. And the third is deemed a Shopping Cart Robot. It follows you around a store, guiding you to items you need, scanning them, and displaying your full shopping list through a smartphone app.

These three robots are in addition to ones LG has already tested at the Incheon International Airport in Korea, including the Airport Guide Robot and the Airport Cleaning Robot. There’s also the Lawn Mowing Robot, which is self-explanatory, and the Hub Robot, which works at a bank providing information and services to customers. 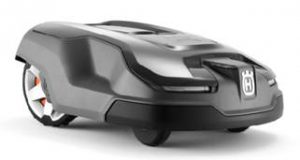 LG isn’t the only company building such robots: why hire a lawn care company when you can grab a Husqvarna mower that can do the work for you, even controlled by voice? Add to that a myriad of robotic vacuum cleaners from companies like Dyson, iRobot, and Samsung, that effortlessly scoot across your floors, under furniture, and in tight corners, reducing the workload (though certainly not replacing it) for cleaning care companies. It’s only a matter of time before full robot bodies are attached to these wheeled gadgets, and they add furniture dusting, dish washing, and window cleaning to their list of duties. (It’s worth noting that robotic window cleaners actually already exist, made by companies like Winbot.) 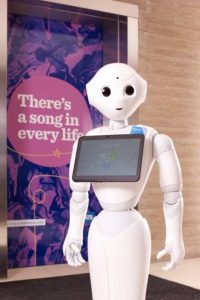 LG’s sophisticated robots are just prototypes for now, but here in Canada, one robot is already hard at work. As of last May, a humanoid robot named Pepper, created by SoftBank Robotics, is employed at select ATB branches in Calgary, helping customers learn about products and services. Customers can talk with Pepper, and/or interact with its built-in touchscreen tablet. And it has a personality as well: in addition to providing useful information, you can also take a selfie with Pepper, and dance with it.

AI robots that can accomplish “jobs” run the spectrum, from basic circular robotic vacuums like the ones mentioned, to full-on, human-looking robots that can mimic facial expressions, exhibit “personality” traits, and even creepily blink, like 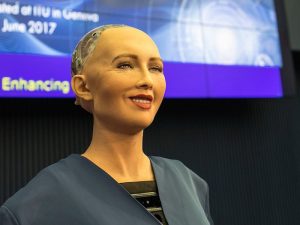 Some wonder if robots like IBM’s Watson, which is already working hard helping doctors in the medical field and other verticals, might put certain high-level jobs at risk. Its artificial intelligence can calculate figures and scan through research documents and reports much faster than any person could, and ensure 100% accuracy without the risk of “human” error.

The reality is that while AI robots may eventually take over jobs that were once occupied by humans, they will also lead to the creation of new jobs, as discussed in a recent MIT report, which categorizes many of the new jobs as “Trainers,” “Explainers,” and “Sustainers.” That said, these particular yet-to-be-defined occupations will require a very specific, tech-centric skill set. Kids will need to reimagine the fields they want to explore for future career opportunities, and society must continue to reinforce the need for increased focus on education in the STEM (Science, Technology, Engineering, and Technology) fields to encourage the next generation to develop the skills necessary for future fruitful employment.

As for those currently in the workforce looking to protect your source of income, we’re a long way’s away from robots and AI taking over the world. But whatever your occupation, take a good, hard look at what you do, and how easy (or difficult) it might be for a computer to replicate it. AI robots represent an exciting, yet scary, future. But it’s one that’s well on its way to arriving in this lifetime.