There is at least $33 billion – maybe as much as $600 billion, according to some industry analysts – in connected car data value to be harvested in the next few years.

The value lies in the data you generate, but whether you actually get paid for it remains to be seen.

Right now, original equipment manufacturers (OEMs) in the automotive annual space are eager to get their hands on your data, and the value it represents. They see some $33 billion USD in revenue opportunities by 2025 if not before, and they are moving quickly (some say they are fighting a war) to get their hands on all that value.

And while we’re used to giving away our valuable data (think of the corporate profit made from the pictures and posts we share online, for example), the idea that we could reap the profit generated by own data turns the existing online business model on its head. 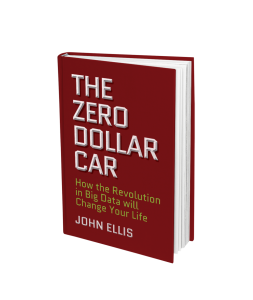 Zero dollar, because that is the potential cost of a new car – if we can sell the data that we generate while using the car.

In fact, data about stuff may be more valuable than the stuff itself.

That’s the eye-opening proposal put forth by author, analyst and technologist John Ellis in his talks, presentations and a recently released book called The Zero Dollar Car.

Zero dollar, because that is the potential cost of a new car – if we can sell the data that we generate while using the car.

“I wrote the book to be provocative,” Ellis told WhatsYourTech.ca in a phone conversation. “We may be talking several years (away) still, but the end purpose of the book is to raise awareness now. You may be able to trade data for money, or at least a significant reduction in the cost of just about anything.”

The auto trends are sure heading in that direction: According to research firm Chetan Sharma Consulting, last year was the first year that the wireless industry’s telecom operators added more connected cars than cellphones to their networks.

Vehicles today and soon to come have literally dozens of microprocessors and hundreds of sensors that collect real-time data about the performance of the car and the behaviour of its driver. For the auto manufacturer, that data has value. Connected cars can also provide useful information about traffic volume and roadway design, that data has value to municipal traffic agencies, transit services, insurance companies, even law enforcement.

And for any potential advertiser, as Ellis points out, the connected car represents a two-way street, both to collect valuable data and to deliver messages directly to the occupants.

“One thing advertisers want to do is catch your attention, get you attracted to their product,” Ellis related. “The other thing, traditionally, they had to do was get you up off the couch. But you as a driver are already in motion, and there’s an opportunity to influence you while you’re out there. Can I get you to change your route even slightly to offer you a cup of coffee or a discount on that pair of jeans you’ve been looking at while you are nearby?”

His descriptions set off a wave of contemplative thought about just what Google and Amazon might do with such an opportunity.

Companies like those have become among the richest entities on the planet based on the incredibly insights they can glean into consumer behaviour. They can and do often put the right ad in the right place at the right time (and often to trigger a purchase decision, not just fulfill one) based on the data they collect and the inferences they make. It’s working well for them – and how!  Google, for example, cites some 90-plus billion dollars in online ad revenue annually.

And if advertisers are correct in thinking that being able to target a consumer in or near the place of purchase is even more valuable – some say it’s some five or six times more worthwhile – well then the potential connected consumers marketplace is $600 billion and counting! 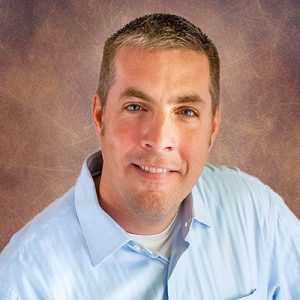 The potential is so great, Ellis continues, that “data brokers” will (some already are) be needed to manage this new industry.

In painting one potential scenario, Ellis describes a potential car buyer who might consider allowing the data from his or her vehicle to be used by a third-party, if it means a price discount. In negotiations with the auto dealer, he or she may be offered an annual fee or one-time lump sum for access to that data.

That’s the zero dollar car – and of course, it could be a fridge, a home heating system, almost any object on the Internet of Things.

So why isn’t this happening now? What is the trick we need to learn to recognize our own value and the value of our data, and to ensure we get tangible value in return for its use.

“I believe some kind of system that allows individuals to have a share in monetizing their data is the way we need to go,” Ellis concludes our chat and his book with a call for more educated consumers. 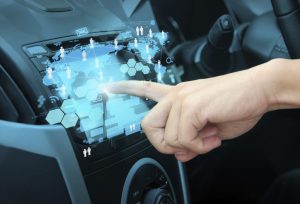 We as consumers lose if we do not understand how much data we generate and how valuable it is to others.

“We as consumers lose if we do not understand how much data we generate and how valuable it is to others. To win, we should truly understand how our data is being commercialized (often without our knowledge or permission) and we should be paid for our data.”

We think of ourselves as consumers, but in fact we are producers in the digital age. We create the value in the digital economy through the data we generate; the value is not the apparent convenience (so-called free services, easy online access, one-click shopping, you name it) we get in return.

Recognizing its value is one of the best ways to protect our data. And get paid for it, too!

Addendum: The Canadian government, through its Standing Senate Committee on Transportation and Communications, has released a report on autonomous and connected cars. Stating in part that “cybersecurity measures are essential to maintain public safety and public confidence in this new technology”, committee members added that “[t]hese vehicles collect a vast amount of data and could be the target of hackers who want to use the vehicles for nefarious purposes.”

We”ll have more on the report and what the government intends to do about it, in an upcoming post to WhatsYourTech.ca, scheduled for March 16.