When you lose Internet service, what do you do? When all other forms of communication fail due to natural disasters or other disruptions, how do you maintain contact with friends, family and the wider world?

When efforts are underway to close the digital divide and get Internet service to underserved regions of this or any other country, where are cost-effective and technologically capable solutions?

A Canadian company has the answers.

It’s using the inherent transmission technology (Wi-Fi, Bluetooth and Wi-Fi Direct) in cellphones and connected devices to act as nodes or relay points in a new kind of network, separate from the Internet and not dependent on cell towers.

RightMesh is a software-based networking platform and protocol incubated by the parent company Left, in Maple Ridge, British Columbia.

Users do not need additional hardware or infrastructure, nor an ISP, to get connected. The company describes how its software solution helps create a fully-distributed wireless mesh network using devices many people already have (Android and iOS mobile phones and IoT devices). It’s a way to help bring connectivity to locations with expensive data plans and slow Internet speeds – or none at all. 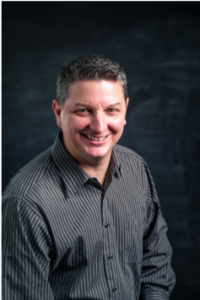 Frustrated with poor connectivity among the 100 or so company staff and developers in their offices in Bangladesh, CEO and co-founder John Lyotier described how they developed a rudimentary offline communications app as an in-office work-around. “We knew that developing what has evolved into RightMesh was the ‘right’ thing to do.”

(That evolution, by the way, includes earlier mobile app products called YO! and WAVE, or Wireless Availability for Variable Environments. The company also has in alpha stage development an instant messaging app, meshIM, said to eliminate the need for third-party providers when directly messaging peers.)

So way more than an in-house productivity boost, RightMesh has developed powerful responses to natural disasters, economic or technical inequities, and even those threats posed by legislation seen to undermine Net Neutrality.

In B.C., the threat of natural disaster is never far away: “The recent tsunami alert here reminds us just how quickly a disaster can strike,” Lyotier described during a (landline) phone call from his B.C. office. When the Internet, social media and mobile connectivity are not available, mesh networking and a dedicated app called Flare can come to the rescue.

In the case of disruption to phone and Internet service, the app lets users send an emergency “Flare” or blast message for help to anyone available on the mesh. The company is working on features like peer-to-peer text, photo, audio and geo-location sharing on downloadable maps. 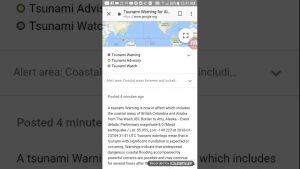 Mesh networking apps can support communications and emergency messaging even if the ‘Net is down.

Lyotier added that RightMesh is developing a “disaster drone” that acts as its own mesh network node to boost connectivity. The drone could fly over affected areas, detect the emergency Flare and let rescue workers know.

Even when there’s no natural disaster, a lack of Internet connectivity can be a serious problem.

Rigolet is a remote, coastal Inuit community in Labrador where bandwidth can be so slow and unreliable that basic email, chat and search cannot be easily or economically delivered.

But RightMesh is supporting an on-going mobile-app experiment conducted by community members, local officials, and researchers at the University of Guelph and Newfoundland’s Memorial University. 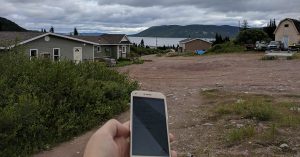 In a remote, coastal Inuit community in Labrador where bandwidth is slow and unreliable, RightMesh is supporting an on-going mobile-app experiment with mesh networking solutions.

“There are towns in the Canadian north with only one cell tower, so access is expensive and unreliable,” Lyotier said as he described the mesh network his company established to support the app project.

Called eNuk, the app not only helps residents communicate, but it has tools used to track changing environmental conditions (like unsafe ice conditions in the area). Researchers and residents now have a powerful data and image-sharing platform, and they can identify, share and geo-pin dangerous areas.

Sometimes, however, it’s not a scarcity of connectivity that’s an issue – it’s high-density demand.

In highly populated but nevertheless emerging Internet markets, billions if not hundreds of billions of dollars are needed to roll out the physical infrastructure needed to connect everyone. But RightMesh and its software can be used to build mobile mesh networks much more quickly and inexpensively.

Lyotier speaks of “situational relevancy” as a key way to rethink networking, communication and connectivity needs in such areas – it’s often much more important that members of the community be connected to one another locally, and not necessarily or constantly to a wider, global network.

“We can transition entire regions,” Lyotier says of the company’s existing products and stated mission to bring contextual connectivity to the next billion. The ambitious goal means raising people out of poverty, reducing infant mortality, spreading education opportunities and more, all with the power of the mesh network.

Ambitious, but not unfounded: In fact, RightMesh has been recognized for having the “Best Wireless Innovation and Excellence in Social Impact” by the Wireless Broadband Alliance.

Bringing effective and economical connectivity to places with little or no Internet access is both a technical and a social balancing act, something the company is good at back at home, too.

Having purposefully based itself outside Vancouver’s busy city centre as a way to balance quality of work, life and play, the company has also been recognized for its positive work environment – in fact, it’s been called “the coolest office space in the Lower Mainland, complete with a games room, library, lots of beer, and a plenty of silly people.” 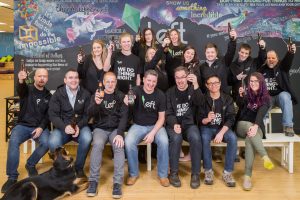 The “coolest office space in the Lower Mainland has lots of beer, and plenty of silly people” doing great things with wireless mesh networking.

They can laugh at themselves, but they can also tackle some of the world’s most serious issues.

How the Smart Home is Getting Smarter