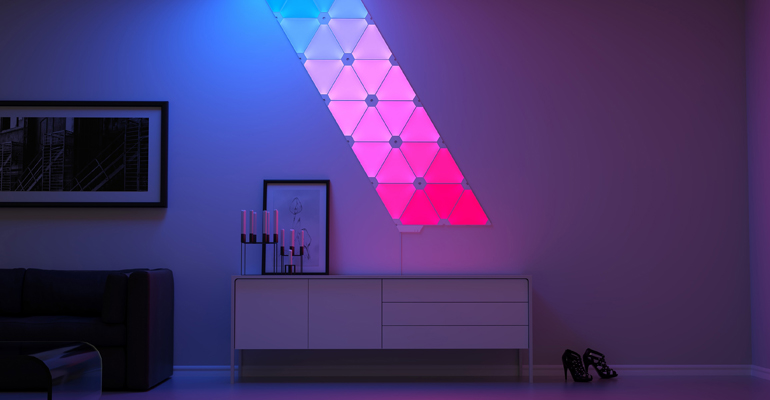 LED lights are undeniably cool, especially when it comes to unique designs and setups the way in which Nanoleaf’s light panels work.

Nanoleaf is a homegrown Canadian company that has made a name for itself since it first launched its LED panels as a startup on Kickstarter. Now, the Aurora is available as a starter kit in brick-and-mortar and online retailers.

The $200 Starter Kit is necessary as a point of entry to use the panels, but the system is designed for expansion beyond that. The kit comes with nine panels. Each is in a triangular form with slots for small plastic connectors called flex linkers that bind them together.

They aren’t solidly connected, though. Piecing them together is easy, but it takes careful planning when it comes to placement. The Nanoleaf app for iOS and Android does walk through the whole process from initial setup to fastening onto the wall using the adhesive two-sided tape that come in the box. It includes a section to virtually assemble the panels and see how they might look — and if they would fit in the space you’ve allocated.

The key is that you need to be certain of what design you want to go with. Once the panels are up on the wall, it’s not so simple to take them off without leaving residue or taking some paint off.

At about 9 inches wide for each panel, they can take up a fair amount of room if you plan to expand even further. Thinking ahead to how your design might look with more panels later on is worth doing before committing.

Each panel is capable of producing 6.7 million colours, with white light ranging between 1,200 to 6,500 Kelvin. They can get pretty bright, but these are definitely not meant to be the primary light source for any room. Think of them for ambience.

There is no shortage of preset light patterns you can choose from on the app. Most are dynamic, so they shift in colour and brightness as they stay on. Others are static, sticking to one colour or shade throughout.

Unfortunately, the Aurora couldn’t do gradients. When there were different colours in play, one panel would transition in colour to the next one. There was no way to create a gradient effect that would look seamless from one end to the other.

Moreover, the tips on each panel don’t illuminate, so the light isn’t entirely seamless, like edge-to-edge glass on a phone, for instance.

Still, the sheer level of experimentation is enough to kill plenty of time and impress people. The app makes it easy to create and save customized lighting setups. If you want them to be dynamic, you can pick the colours, the sequence they appear in, how long they last and how bright they get.

Moving to the Rhythm

That brings us to the Rhythm Module, a separate add-on that plugs into the primary panel powered by a wall outlet. This small unit has its own firmware, but can be updated on the app, and it’s main purpose is to add circumstantial dynamism to the lights. 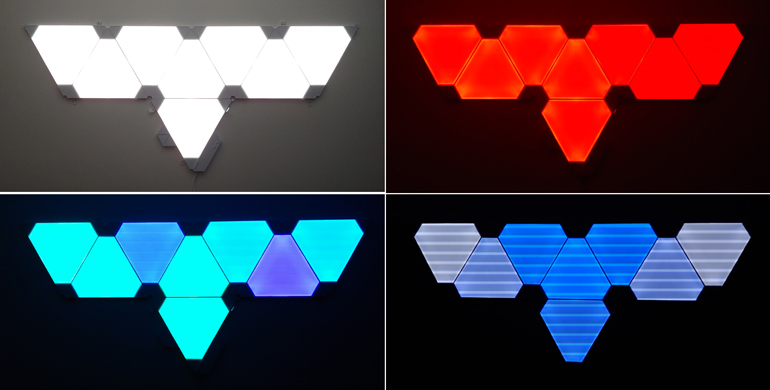 For example, when on, the panels will react to sound, lighting up to the beat and melodies of music playing in the background. This is why the app has a separate Rhythm section with options, like Fireworks, Meteor Shower, Northern Lights and more. The way they respond to sound is impressive. Music is an obvious one, but even chatter from multiple guests in your home would have it shifting constantly.

Nanoleaf does now sell the Rhythm Edition for $250, which basically adds the module to the existing starter kit.

Nanoleaf made the lights smart, meaning you can control them by voice using Siri, Google Assistant or Amazon Alexa. Even recipes via IFTTT will work.

Having any one of those voice assistants immediately simplifies how to utilize them in a pinch. Need bright daylight, a fireplace, ocean view or some custom setting you created? Just ask for it. Alexa and IFTTT expand on this further in their own ways.

With Alexa, you can add the light panels to a routine, so they turn on when you trigger the sequence you want. For instance, if you wanted certain dimmer lights for watching a movie or playing video games — and you created such a routine by adding the panels in the Alexa app — they would light up on command.

With IFTTT, you could create a recipe wherein the panels light up upon arriving home and getting onto the home Wi-Fi network.

Not all LED lights are “smart,” but more of them are these days, with the likes of Philips Hue, LiFX, Osram Lightify and Ilumi already in play. But the unique design and features mean the panels can complement smart lights from those brands, too.

I wasn’t all that thrilled that the lights required only a 2.4GHz Wi-Fi band to work. More and more mesh network routers are combining both the 2.4GHz and 5GHz bands into one SSID. That ends up confusing the panels who aren’t able to connect, while the mesh network doesn’t know the panels are only supposed to be using one band.

That’s less of a problem for routers that use two distinct SSIDs. In cases where you are stuck with one, a workaround is to create a guest network under the 2.4GHz (if you can choose only one band, mind you) and connect the lights to that.

One issue in that case is that voice commands may not work — unless you’ve given the guest network full access to also log into the router itself.

For laymen, this probably sounds complicated, but the gist is that the Nanoleaf system works best under dual-band situations.

The Nanoleaf system is primarily for decorative purposes. If you want to liven up a room or give it a new look, a set of light panels will certainly achieve that. There is no LED lighting ecosystem quite like it. Yes, Philips and Osram Lightify have LED strips, which are great, but they are an entirely different thing.

If you have $250 to spend, and would consider spending more, the Nanoleaf system has plenty of upside for changing your lighting setup at home.

App Contest to Drive Innovation in the Legal Profession