Headphones have evolved from earcups attached to a headband, to earbuds with thin wires, to buds attached to bands that sit around your neck or behind your head. Now, the worlds of earpiece headsets and earbuds have collided to create a new category of headphone, called “true wireless” earbuds.

True wireless earbuds are just that – truly wireless. There’s a single bud for each ear that isn’t attached to any cord at all, much like a wireless headset or a standard pair of earplugs. Pop them in your ears, connect them wirelessly to your music source, like a smartphone, and start listening. They usually only run for a few hours on a battery charge, but come with a convenient carry case that can double as an on-the-go charger.

The most notable pair of true wireless earbuds is the Apple AirPods. But several other companies have popular models as well, such as the Samsung Gear IconX, Sony Xperia Ear, Bose SoundSport, and more.

Here are some of the latest true wireless earbuds to be announced. 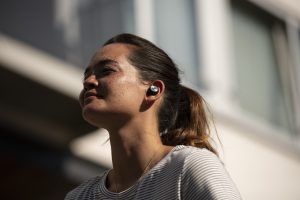 As the newest addition to Sennheiser’s Momentum line, the company’s Momentum true wireless earbuds add neat features like Transparent Hearing, which bleeds ambient sounds into the listening experience so that you are still aware of your surroundings, and can actively participate in conversations without having to remove a bud to chime in or hear what the other person is saying. Access voice assistants like Siri and Google Assistant by simply tapping the touch interface. Voice is optimized thanks to two-mic beamforming technology, and the Sennheiser Smart Control app, which will launch in time for the product, can be used to fine-tune audio. Splash- and sweat-resistant, they run for up to four hours per charge, and recharge in the included case for up to 12 more. They’ll be in Canada in mid-November for $379.95. 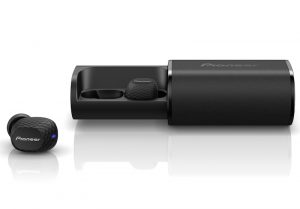 This new pair of in-ear wireless headphones has controls on each side: the left bud can control power on/off, play/pause, and previous track; and the right can handle power on/off and play/pause as well, along with next track, receive/end call, and voice assistant. It works with the Pioneer Notification App for Android, which can read notifications from a connected smartphone, and works with both Siri and Google Assistant. With an LED battery indicator, the included charging case can recharge the buds in just an hour, and can charge them twice over before it needs to be recharged itself. The buds are available for $190. 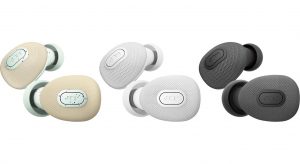 Running for up to three hours per charge, these cute buds, like the others, come with a charging case. But not only is the case good for recharging the earbuds up to 10 times: it can also be used as a back-up battery for other mobile device. So when you aren’t recharging the earbuds, give your smartphone a boost if it’s running low on juice. Answer incoming calls as well as listen to music, and wear them for hours on end thanks to the ultra-light silicone design. $120

These earbuds come with three sizes of silicon tips that offer a good seal and secure fit. The buds, which can run for up to 3.5 hours per charge, are both splash- and sweat-resistant. Use the charging case to get an impressive up to 14 hours of playtime: they charge in 1.5 hours, but can gain an extra 45 minutes of use with a 15-minute quick charge when you need audio in a pinch for your workout, lunch break, or commute home. There are built-in controls for volume, answering calls, and controlling music playback, as well as for accessing Siri and Google Assistant. US$129