Online marketers, social media influencers and ad campaign brand managers will continue to make use of technology to serve their interests – particularly when one of Top 25 most influential people on the ‘Net is not a person, but an artificially intelligent animated robot.

Artificial intelligence, machine learning, robotics and advanced computer-generated graphics are among the latest and most popular tools in the marketer’s kit: an industry report called Artificial Intelligence for Marketers 2018: Finding Value Behind the Hype contains enthusiastic predictions for global spending on artificial intelligence (AI) technology, with an estimated $6 billion USD in investments this year and $29 billion by 2021.

Among the values that seem to have been found behind the hype are AI-powered, CGI-created influencers, a new kind of robotic spokesperson for a product, brand or social trend. 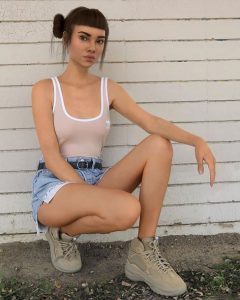 Lil’ Miquela is one case in point: launched on Instagram back in 2016, she seems to have started out as a digital art project, but she’s quickly evolved into one of the most, uhh, influential people on the Web.

The fictional character was created by the folks at Brud, a real digital media company. Miquela combines robotics and artificial intelligence, according to her publicist, and she surely has some good writers and computer graphic artists on her side.

She also has a rival: another AI-powered character named Bermuda. It may be that Miquela (who does not exist) had her social media account hacked (by someone who does not exist). It’s a great story, perhaps even an influential marketing campaign of its own.

In the world of advertising and marketing, AI-enabled systems are used to analyze millions of data points about a consumer, and to learn from the careful analysis of that data in order to generate highly targeted marketing messages and very specific customer interactions.

Looking at posts that a person has already made or read, following topics in which a customer has shown previous interest, analyzing the user’s demographic and psychographic profile, AI can make very specific recommendations about making connecting with the customer, even to the point it can tell the best time of day or day of the week to contact them. AI tools are used to determine and create the best kind of communication and content – images and words, right down to an email subject line – that catches a target’s attention and generates more clicks. 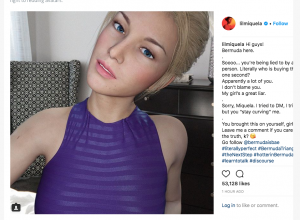 Did Bermuda hack Miquela’s Twitter feed? Perhaps, but both artificially intelligent influencers got a big boost in likes. Twitter image.

Catching attention is one thing, but the predictive marketing and sales models developed through machine learning can rank potential prospects and identify people as qualified purchasers. AI-powered recommendation engines learn how to suggest the next purchase, and the next.

Social media algorithms already reward posts that have lots of likes and comments, and higher engagement levels mean more people will click and connect to the post, automatically reinforcing a message and extending the brand. The computerized machines of today that learn how and why that happens (heck, even old-school marketers who learn how and why that happens) are more successful than those that do not.

Both groups know that eyeballs are at a premium on social media channels. To build the largest following, to attract the most users, marketers know the message has to stand out from the rest, be distinct from the competition, and establish a unique value in the mind of the consumer.

That’s known as positioning, a marketing phrase first applied more than 30 years ago in a now-classic book by Jack Trout and Al Fries. Their advice can be paraphrased as ‘It’s not what marketers do for the product, but what marketers do to a prospect’s mind’ that brings success.

Of course, nowadays, marketers often get other people – popular people – to do their bidding.

Influencer marketing takes advantage of celebrity status, and the built-in like and trust factors a well-known celeb already has.

Or can create for themselves. 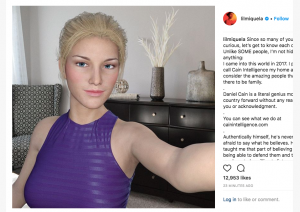 “Bermuda is the first of her kind,” boasts the company that created her, Cain Intelligence. She’s “built to speak the truth” and she represents “not only a breakthrough in artificial intelligence but also in modern political thought.” The company is a self-proclaimed Donald J. Trump supporter, a fact that adds extra weight to its testimonial, if not the impact of artificiality overall. Twitter image.

Bermuda and Miquela were not celebrities before they launched, but by carefully analyzing just what it is about them that catches people’s attention, their creators figured out how to make powerful spokespersons on behalf of other companies, products or services (Miquela for Prada, for example; Bermuda, well, for her own creator).

Those spokespeople (spokes-bots?) are so valuable to the process that AI techniques have also been applied to identifying social influencers.

Influential is a leading social data and brand activation company in that space; founded in 2014, it has raised millions to develop an IBM Watson-enabled social intelligence platform that identifies and matches influencers with campaigns. By applying AI to social media pix and posted photos, for example, an image can be broken down into its core components (background, specific colours, etc.) in order to learn just why the image got so many likes, and why it resonates with its followers, and how an influencer can best make use of that information.

In a company testimonial, Influential CTO Piotr Tomasik describes how Amazon’s recognition software (called Rekognition) is used in his company: “In addition to our in-house AI/ML algorithms, we partner with third parties to enrich our datasets in order to better facilitate influencer sourcing. Amazon Rekognition object and scene detection allows us to better segment our influencer population into specific verticals and topics based on what media they post alongside their social media content.”

(As a senior marketing executive once told me, “It’s not about elocution…it’s about data!”)

Facebook and Google know that — big time. They’re not only using machine learning and artificial intelligence tools to gather and analyze more data ab out their users, they are developing them. Both companies are developing new tools to identify people who are most likely to take an advertiser’s intelligent advice and follow the desired action: buy now!

By using sophisticated AI algorithms and machine learning techniques to automate ad placement (not just placement but testing, tracking, adjusting, optimizing and learning better for next time), online marketers, social media influencers and brand managers can refocus their campaigns on an almost real-time basis, responding to as well as triggering new consumer interests.

Just as they can with artificially enabled simulations like Bermuda and Miquela. 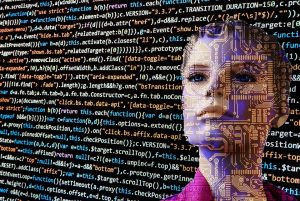 Artificial intelligence, machine learning, robotics, computer graphics: the latest weapons of the digital marketer are being brought to bear in the war to capture consumer eyeballs. In one survey of 1,600 marketing professionals, nearly two-thirds said that both artificial intelligence and machine learning will be the most important data initiatives next year. Another survey by Salesforce indicated that 51 per cent of marketers are already using AI and 27 per cent more are planning to use AI technology in 2019.  CC0 Creative Commons image.

Are Chromebooks ready to take on the PC market?