While the company and its service offerings have been around for decades, its newest release of a suite of software tools for business users is an introduction for many people.

Zoho Corporation emerged early in the 2000s from an already-established history of developing web-based business tools and information technology solutions. Beginning with a customer relationship management program in 2006, Zoho has released additional office and business productivity programs pretty much every year since then, covering communications and content creation, sales and marketing, customer support, accounting, back-office operations and more.

In 2017, Zoho unified many of its programs into a suite called Zoho One, and now it has released an AI (artificial intelligence) powered package of tools that’s offered as an online service. 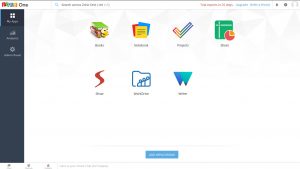 Zoho’s core programs can be supplemented with some 40 other app, covering communications and content creation, sales and marketing, customer support, accounting, back-office operations and more.

Zoho Office Suite packages up four cloud-based software apps: Writer, Sheet, Show and Notebook, all of which are enhanced, the developer says, by Zia, its new AI-powered assistant which can help correct grammar in user-written documents, answer questions about data in a spreadsheet, or use its voice-recognition capabilities to gather and assemble raw notes and basic information related to a user’s spoken command or inquiry.

Depending on the software tools used, the number of users and the amount of usage, costs of the online Office Suite start at $3 (USD) a month for small- to medium-sized companies; larger enterprises pay $6 per month per user. Single users can access core service for free, and there is a 30-day trial offering that gives access to pretty much all that Zoho offers for free. The company does not currently have an ad-revenue model; it relies for the most part on subscription fees and software add-on sales.

The Office Suite’s core four programs can be supplemented with some 40 other apps that Zoho has developed or includes as part of its overall software as a service offering. Zoho may call itself an operating system for business, which of course it isn’t (Zoho can run on Windows, iOS or Android), but its wide range of tools and supports for business operations is systematic, for sure.

“We built Zoho Office Suite to be the most integrated suite of productivity tools of its kind,” said Raju Vegesna, Zoho’s Chief Evangelist. “For decades, Zoho has provided tools for users to share and work on documents quickly and efficiently. Now, with this new version of Zoho Office Suite — powered by Zia — Zoho’s integrations are tighter than ever before, providing seamless collaboration across departments and teams.”

Even beyond Zoho’s tight integration assertions, that speaks to an ability to connect with other apps as well, such as using Zoho’s PowerPoint-like Show software to create business presentations that can be shown on Apple TV or Android devices, turning the user’s smartphone into an app controller that speaks to multiple screens and sources.

Zoho Writer, the document creation software, offers good compatibility with Microsoft Word documents, for example, and most text and editing features are supported.

Zoho Writer, the document creation software, offers good compatibility with Microsoft Word documents, for example, and most text and editing features are supported (some text and image effects will not carry over from one program to the other, however).

Pop-up windows and collapsible menu bars are filled with familiar tools for creating and editing a wide range of documents: even without asking Zia, I was pleased to find and use a full range of spell check and grammar tools, customizable by country and language, that responded immediately to user changes or new text entries.

Picking up on trends seen in other software programs (and operating systems), Writer has a distraction-free, remain-focused mode which can be used to visually highlight a certain passage or paragraph that’s being composed while also dimming the rest of the document.

(And in a nod to nostalgia and office environments of the distant past, Writer lets you turn on a typewriter sound mode that recreates the clickity-clack of those great Underwoods of yesteryear.)

But it’s the artificial intelligence in Zoho that speaks to tomorrow. In Writer, Zia detects context-based grammar mistakes, rates the readability score of each document, and makes style corrections designed to improve overall writing quality.

Zia can provide insights into data sets in a spreadsheet, too, as it responds to Natural Language Querying, letting users can ask it questions about the data and getting appropriate functions, charts or pivot tables in response, which can then be integrated into a spreadsheet presentation. There’s a “data-cleaning capability” in Sheet that can identify and rectify inconsistencies, duplications or other possible errors in processed data entries and supplied information.

The Notebook app is the newest addition to Zoho Office Suite, and it too is AI-powered. With just a voice command to Zia Voice, this unusually advanced note-taking program can be used to create customized “smart cards” in which raw information like text, images, lists and so on can be rounded up from a website and organized by the app into topics the user requested.

Using Zoho’s own scripting language and its visual application development tool, Zoho Creator, users can drill down and create customized features and functions for not just existing apps, but across dashboards, admin tools and even all-new, user-created apps. 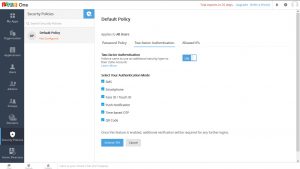 Privacy and security tools in the Zoho suite include settings for Single Sign-On (SSO) and two-factor authentication (2FA). Admins and access can be set for specific departments and teams.

The degree of customization in Zoho (if not the sheer number of possible choices for apps and features) is a bonus for some business users, but perhaps an intimidation factor for others. Some companies just want to get up and running in a robust, secure and solid software environment. Others have the time, resources and inclination to get under the hood and regularly tweak programs.

Zoho is ready for both, not only with its script writing and visual development tools, but also with its online concierge service to advise and support users, as well as a global network of Zoholics — users who share advice, tips and techniques through social media platforms, online chatboards and even live events coordinated by the company.

The Zoho user base counts some 45 million users, and the company has offices in many countries worldwide (no offices in Canada as yet, and the company notes that its servers are based in the U.S.) that have helped it grow from a small start-up in Chennai, India, those decades ago to a global SaaS that today is a solid alternative to the big boys on the integrated office and business productivity software block.

Reviewing the Google Pixel 3a