In the five or so years since they received a patent for their solution to plastic pollution, it seems more than a trillion plastic straws have been used worldwide. 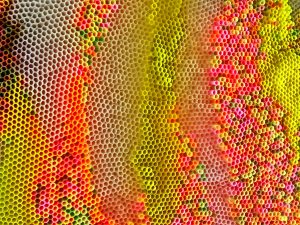 Every year, a seemingly uncountable number of single-use plastic straws find their way into the ocean, and from there into the food chain of marine life and humans worldwide. Creative Commons “made of straws texture” image by Retinafunk. Licensed under CC BY-SA 2.0 .

So when the two female founders of the cleantech company called Loliware were named winners of the Pitch 2019 at the Collision Tech Conference in Toronto, they spoke from direct personal experience about facing “an unrelenting sense of urgency” in developing a new technology to tackle an existential environmental challenge.

The United Nations warns us that nearly nine million tonnes of plastic — bottles, packaging and other waste — find their way into the ocean every year, and from there the plastic degrades and disintegrates as micro-particles that get into the food chain of marine life and humans worldwide.

Straws add up to about 2,000 tonnes (despite the fact that some alternatives have already been introduced to the market).

Loliware makes “hyper-compostable” straws out of seaweed that “look, feel, and act like plastic”; the company intends to completely replace single-use plastics with its patented product and process technology.

Co-founded by Chelsea Briganti and Leigh Ann Tucker, New York-based Loliware launched its first product in 2015, and even then the pair had been working for years to gain traction for their idea and their industrial designs to combat pollution, having successfully presented at an even-earlier competition in 2010.

With plans (and patents) for biodegradable and edible alternatives to plastic cups, the pair began to grow their team of material scientists, food technologists, seaweed biologists and biopolymerists, and they used crowdfunding techniques such as a Kickstarter campaign to help that growth and continued product development.

Their continued efforts have now led to LIST, for Loliware Intelligent Seaweed Technologies, and a way to create different items designed to disappear after a single use.

The Loliware straw is described as 100% plastic-free, gluten-free, gelatin-free, BPA-free, non-GMO, all-natural, non-toxic, safe, and FDA approved. It’s made from a combination of biodegradable (edible) material like seaweed, with some organic sweeteners, flavours and colours derived from fruits and vegetables as part of the recipe.

The audience and judging panel at Collision liked what they saw – or tasted!

One of a select group of 60 tech startup companies (more than 1,100 applied) that reached the finals of the competition, Loliware pitched its product during a lively and competitive series of presentations on the Collision stage.

Loliware pitched its product during a lively and competitive series of presentations on the Collision stage. Instagram image.

When presented with the First Place Award, co-founder Briganti was naturally thankful for the support, but she noted just how long the road ahead is “to achieve our mission to heal the planet by making single-use plastic obsolete.

“The plastics problem is quite literally as deep and as wide as our oceans so we feel an unrelenting sense of urgency to ensure we achieve huge impact through rapid adoption at massive volume.

“Winning Pitch is an incredibly exciting milestone for Loliware. It signals the strides we have made in material science innovation, coupled with our ability to achieve meaningful environmental impact.”

Not only are the straws edible, but the company founders also underscored the fact that the product is sustainably developed. Seaweed is a regenerative resource and it can store or sequester lots of carbon dioxide, a major contributor to the effects of climate change.

Other plastic straw alternatives, like paper-based straws, cost more to produce and, of course, they require tree-based land-using resources. Reusable straws made from glass or metal will last longer than paper straws, but they will eventually find their way into the already-crowded waste stream.

In addition to its awards, Loliware has also garnered a lot of corporate support: the company is now backed by tech investors like Mark Cuban and Closed Loop Ventures, while Fortune 500 firms like Marriott and Pernod have pledged they will make the switch from plastic to Loliware straws this year (select customers and early supporters have been sipping from the first wave of Loliware straws since March). 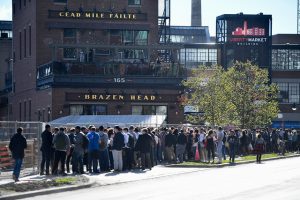 While Loliware was celebrating its victory at Collision, conference organizers were themselves celebrating their own wins: marking the first time the tech conference has been staged in Toronto (Collision is in its sixth year now), organizers hit their attendance target (over 25,000); surpassed previous startup company participation levels (by more than 80%); and achieved their best gender ratio of any previous conference, with women making up 45.7% of all attendees.

So it’s coming back: Collision 2020 has been booked in Toronto and applications are being accepted for what’s been called “North America’s fastest growing tech conference.”

We’re hoping no plastic straws will be in sight.