Data collection devices that can track sport performance are so small they don’t have to be worn by athletes, they can be ingested.

But not only are miniature electronic sensors and low-power transmitters being swallowed by competitors in high-performance sports, these new ingestible electronic devices are being used to monitor people in many extreme situations, be that athletic, medical or environmental. 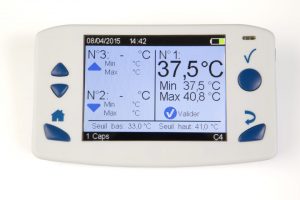 Athlete data can be tracked and monitored with handheld display devices; each device can track up to three pills. BodyCap image.

Ingestible tech is the latest tool used for data surveillance: alternatively known as smart pills, pill cams or computers in a capsule, these mini-monitors can combine temperature, physiological and other environmental sensor; cameras, chemical detectors and wireless transmission platforms; data storage capabilities and remotely programmable software programs that can all respond to signals sent from a smartphone or digital device. Prices per pill are around $70 to $100.

According to the report Smart Pills Technologies Market (2012-2017), the global smart pills market has already reached nearly a billion dollars (USD), with growth in market revenues and product features only expected to continue.

The BodyCap is one such device: also known as the e-Celsius Performance device, this ingestible device measures an individual’s body core temperature. Captured data can be easily retrieved with an external monitoring device that’s held within about three metres of the person being monitored.

During player warm-ups, during the game itself and afterwards during cool-down and recovery periods, being able to track individual data from each player can help the training staff when treating players to drop their temperature after a game.

Just being able to cool down safely and effectively is enough of an advantage for some athletes: participants in competitive track and field meets for example must exert themselves to the max in conditions that are often less than optimal.

Fighting heat and humidity in summertime competitions is a challenge at the best of times, but top athletes preparing for the next IAFF World Athletic Championships know their events will be staged in Doha, Qatar. The Persian Gulf state plays host to the games this September (one of the country’s hottest, and its dryest, month). 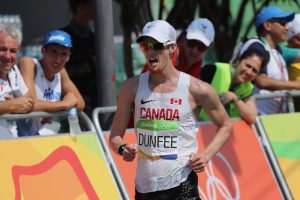 Canadian Olympian Evan Dunfee in the race walking competition at the the 2017 BMO Vancouver Marathon. Photo courtesy of Evan Dunfee.

Canadian Olympic and IAFF athlete Evan Dunfee of Richmond, BC will be race walking in Doha – he’s one of five athletes who will represent Canada in the 10,000-metres and race walk events.

Dunfee is the 2019 national champion in the 20K race walk, and he has a gold medal from the 2015 Pan Am Games. He knows full well that in very warm conditions athletes need to pre-cool with ice towels before they work out or race, not to mention cooling with water and sponges during the race.

Knowing a competitor’s body temperature and the treatment efficacy for that temperature are crucial to his or her performance, so Dunfee has used and tested the BodyCap before, such as at last year’s NACAC meet in Toronto. 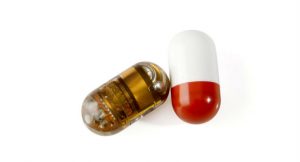 Made of biocompatible medical grade plastic, data-collecting smart pills are meant to be swallowed.

Made of biocompatible medical grade plastic, the pill wirelessly transmits internal temperature measurements to a monitor called e-Viewer every 30 seconds.

Sport scientists and athletic performance coaches who work with Canada’s Olympic athletes can analyze the biometrics gathered at such events in order to measure and mitigate important performance factors like heat, humidity and humidex, and how they influence performance intensity and athletic achievement.

In fact, in the desire to know more about how data can be used to enhance athletic performance in many other sports is driving another competition: not athletic, but digital.

The Canadian Sport Institute Pacific (CSI Pacific) co-sponsored ASA Datafest in 2019 looking for North America’s top undergrads in Data Analytics and how they can find meaning in a large, rich and complex data sets.

Gathered as often as not from small, inexpensive and capable data sensors.

BodyCap is based in Caen, France. The patented device is represented in Canada by Bio-Lynx. 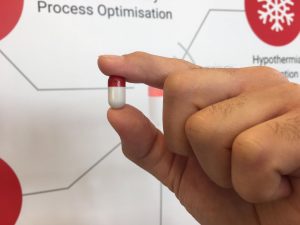 Not only are miniature electronic sensors and low-power transmitters being swallowed by competitors in high-performance sports, new ingestible electronic devices are being used to monitor people in many extreme situations, be that athletic, medical or environmental.

Smartphone Manufacturer Vs. Telco Device Care Protection: Which Is Best?