Whether you’re in your home or office, whether you’re riding on a bus or a plane, makers of a new broadband transmission technology want to deliver the Internet to you using light, not traditional radio waves.

The technology is called Li-Fi, and while the idea for transmitting data using light waves has been around for a few years, widely available and commercially adopted products are now being used to connect tablets, laptops, smartphones, modems, routers and a world of other things to the Internet.

Harald Haas, a German professor of mobile communications, has been describing the Li-Fi concept since at least 2011, when he coined the term in a TED talk.

Haas and his team eventually launched their own company, PureLiFi, with a plug-and-play application for secure wireless Internet access with a capacity of 11.5 MB per second, something along the lines of first gen Wi-Fi. 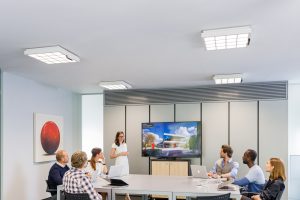 And one of the world’s largest lighting companies, Philips Lighting – it’s now known as Signify – says it’s the first to add Li-Fi enabled luminaires to its portfolio of office lighting equipment.

“Li-Fi has enormous potential for today’s digital age and as the world’s leading lighting company we are proud to pioneer new and innovative services for our customers,” said Olivia Qiu, Chief Innovation Officer, Philips Lighting.

“While radio frequencies are becoming congested, the visible light spectrum is an untapped resource with a large bandwidth suitable for the stable simultaneous connection of a vast array of Internet of Things devices. Being a lighting company, we ensure that our customers benefit from the finest quality energy efficient light along with state-of-the-art connectivity,” she added.

Li-Fi is described as a two-way, high-speed wireless technology similar to Wi-Fi, but it uses light waves instead of radio waves to transmit data. A Li-Fi system uses a signal modulating box that switches light on and off at an incredibly rapid (and invisible to the eye) rate to create the ones-and-zeroes that we associate with computer data. 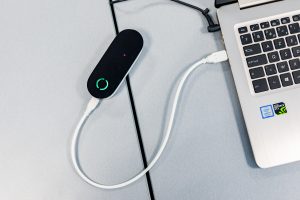 That flickering light is detected by a Li-Fi USB key/dongle that’s plugged into a laptop or tablet; that dongle returns data to the luminaire through an infrared link. (Li-Fi capabilities have not yet been built-in to a laptop or notebook, but the chipsets do exist. Once international standards – and royalty rates – have been agreed upon, Li-Fi capability will be embedded into many devices just as Wi-Fi now is.)

However the connection is made, Li-Fi systems can deliver broadband connectivity at speeds plenty fast enough: lab reports indicate that scientists have achieved speeds of 224 gigabits per second using Li-Fi! Transmissions can be protected with 128-bit AES encryption.

The European firm Velmenni acknowledges that theoretical top speed of 224 gigs, and while it says it has been able to hit that mark in the lab, its commercially available Li Fi product delivers one Gbps.

Signify’s Trulifi system comes in two configurations its 6002 series has a data rate of up to 150 Mbps and works with the light on, off or dimmed. The 6013 fixed point-to-point system boasts a guaranteed 250 Mbps data rate across a two-way, up- and downlink connection using blue, red and green energy-efficient LED lighting. Signify and European telecom provider Vodafone have inked a deal under which they will develop applications that bring together the emerging 5G platform with Li-Fi technologies, taking advantage of its capacity and capability.

Li-Fi proponents say they can guarantee high speed and full bandwidth because light waves are not subject to the same kinds of cross-talk and radio interference that crowded Wi-Fi spectrum often generates.

Beyond its touted speed and capacity, Li-Fi proponents say it offers other benefits over Wi-Fi: it can be used in places where regular radio frequencies could interfere with important equipment, like in a hospital.

Li-Fi is also said to include a built-in extra layer of security: because light cannot pass through solid objects and a direct line-of-sight between light transmitter and dongle receiver is necessary, the need for protection of stray signals that could be picked up by unintended recipients is not as great (neither is Li-Fi’s effective range – the need for line of sight restricts effective transmission distance).

But because Li-Fi infrastructure requires less cabling than other solutions, reducing system costs and weight, airplane and passenger train operators are adopting the technology for customer connectivity for public and private transportation.

With so many new products and services set to take advantage of emerging transmission technologies like Li-Fi, it is interesting to note that a multi-year pilot project to test the real world benefits – or challenges – presented by Li-Fi has been conducted. Conference rooms and other facilities on a somewhat isolated but nevertheless beautiful little island surrounded by Lake Constance in Germany were wired with Li-Fi. Fraunhofer HHI provided the Li-Fi, or visible light communication (VLC) technology, for the application. 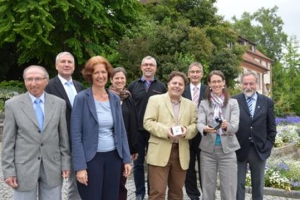 In addition to technical and environmental evaluations, the Li-Fi transmission system was assessed for its ability to reduce health and medical impacts often associated with radio waves and electromagnetic radiation, according to the project pilot coordinators.

Dr. Andrea Leute of the Lake Constance Wireless Initiative said a new approach to mobile communication is “urgently required” to keep radiation exposure in check, and that innovations such as Li-Fi that “minimize the radiation load” are important.

“This is a groundbreaking pilot project for mobile data communication without the use of radio technology, and a starting point for establishing a new basic technology that can be used where radio technology is not appropriate for health or technical reasons,” she added in a release describing the project. 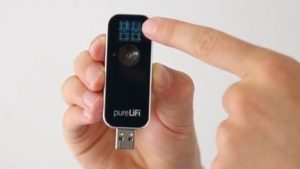 PureLiFi has introduced a plug-and-play application for secure wireless Internet access using light to transmit data. A USB dongle receives the signals and conveys them to a laptop or other device. PureLiFi image.

How a document scanner and restaurant kitchen come together