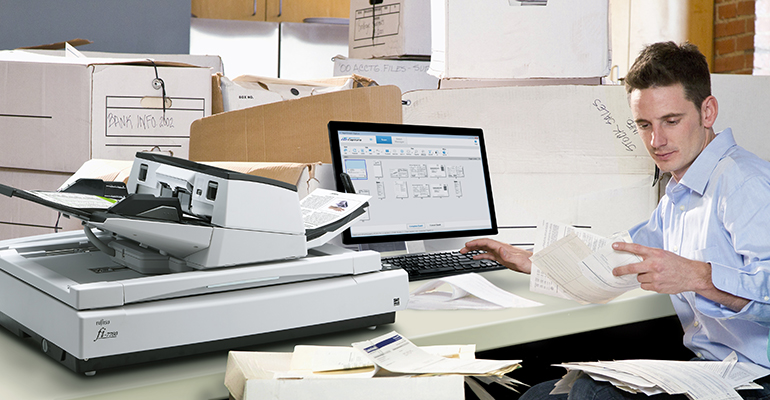 Autistic youth have a hard time finding jobs in Canada, but organizing and scanning large volumes of paper have proven to be just the right draw for an Alberta entrepreneur.

Ling Huang runs an IT firm called Technology North in Edmonton, and his 19-year-old son is among the young people he has employed to work for him. With job prospects limited because of his son’s autism spectrum disorder (ASD), he sought help from the government through its Innovation Assistance Program (IAP) to start up his RoboCoach project aimed at employment for ASD youth.

Ling had an idea. What if he provided jobs to his son and other ASD youth in his new spin-off service bureau that would see them use fast scanners to process and organize large volumes of paper? He forged ahead in December and called it TN Digital Services (TNDS).

“For youth with ASD, being involved in the digital economy and actually getting and retaining a paid job is something they’ve looked forward to for a long time,” says Ling. “People just don’t want to do this kind of work because it’s tedious and leads to a lot of error rates. But people with autism love it and have proven to do it really well.”

The six employees on staff use Fujitsu document scanners to digitize pages in bulk, which generally come in bankers boxes of about 1,500-4,000 pages each. Ling worked out a system of “stations” to run through them faster. At one, workers would remove staples or document fasteners to prepare for scanning. A job coach for quality assurance (QA) are on hand to oversee the process.

At another station, the Fujitsu fi-7700 production scanner does the lion’s share of the scanning, with two Fujitsu fi-7160 scanners set up at a third station to re-scan any pages flagged as missing or obstructed under QA. Ling says the fi-7700 runs through pages so quickly that it allows up to five employees to work on page verification. That’s the part that he says is the “most tedious” but the employees actually thoroughly enjoy it.

“Most bureaus will do quality assurance (QA) sampling of about three-to-five per cent of all file pages before delivering these digitized documents to the customer,” he says. “We perform a 100% QA because people with autism are so good at this job. Every TNDS member received training over a period of a few shifts, and quickly became very proficient at what they needed to do.”

TNDS clients are mostly made up of law firms, government offices, and other large enterprises, all of which produce significant amounts of paperwork. A law firm, in particular, could amass hundreds, if not thousands, of boxes after closing a case. To digitize that kind of volume with flatbed scanners would take an indeterminate amount of time, requiring far more physical labours. The two fi-7160 scanners can run through 60 pages per minute, while the fi-7700 production scanner can manage up to 100 per minute.

Then there’s the challenge of making the newly-digitized data trackable. With optical character recognition (OCR) in the scanning software, text within scanned documents becomes searchable, and Ling says it was one reason why he went with Fujitsu’s scanners. Their ability to keep text and images sharp for each page despite their speed was critical to making the service viable.

Ling feels the autistic staff at the bureau can stand proud because they have proven themselves through their diligence and work ethic, and serves as an example of how employment can give those with ASD a sense of purpose and belonging. Parents of some of the employees say they’ve seen the difference.

“Our son is a higher functioning young adult with Autism and has been employed with TNDS since December 2019. The results of him integrating into and thriving in this position have been nothing short of fantastic,” says Rob Wolfert, whose son, Ryan, works for TNDS. “The mechanism for him to earn money, have a daily purpose, learn teamwork skills and support his goal of living independently is beyond measure.”