I finally found my voice and I began to shout

A lot of numbers can be used to describe an amazing new online experience charting the musical history of Toronto.

But what it is all about can be represented by four numbers, in the classic count to rock’s drivin’ beat:

Interactive multimedia stories about Toronto’s musical legacy and the powerful social impact that music has had over more than half a century are presented in 35 individual segments at the new Sounds Like Toronto website.  You can connect to soundsliketoronto.ca using a desktop or mobile device.

Each segment spotlights a particular artist, musical venue or presentation style seen to epitomize and symbolize a certain chunk of the history of popular music in Toronto. It is a history rich with sounds, songs and personalities that reach across the decades and have become staples of our popular music landscape. Many great performers got their start, found their voice, realized their dreams having first played T dot O. 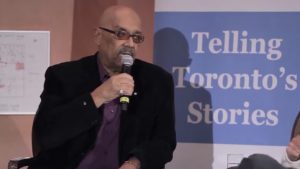 TUNED IN AND TELLING STORIES
Jazz artist Archie Alleyne influenced generations of Canadian musicians, even as he fought systemic racism and discrimination, says the new online Sounds Like Toronto digital experience.
He was the resident drummer at Toronto clubs like the Town Tavern and the Colonial Tavern for several years, but just one of the few Black musicians playing on Yonge Street.
He talked about his life and career during “Tuning Up”, Heritage Toronto’s 2014 Black History Month concert and panel discussion, pictured above.

From Archie Alleyne’s battles with racism and discrimination in Toronto, to Michie Mee’s rap battles at the Concert Hall, to Buffy Sainte-Marie’s protest songs at Yorkville coffeehouses, to Drake’s record-breaking hits that spotlight “the 6ix”, this new digital exhibit combines exclusive audio and video interviews, 3-D objects, interactive tours and of course, tons of music (presented as playlists with highlighted song samples on the app; full songs and playlists are linked at Spotify; video clips to YouTube).

Organizers, contributors and collaborators on the project say it’s been produced to give us a better understanding of the shared music heritage in Toronto and the broader social issues that have helped defined Canadian culture overall.

If not to party hearty.

The musical history project was developed by Heritage Toronto (an agency of the City of Toronto) with financial support from Digital Museums Canada, the investment program formerly known as the Virtual Museum of Canada. Three years in the making, Heritage Toronto partnered with Montreal-based interactive multimedia production company Plank Multimedia to deliver the digital music experience. 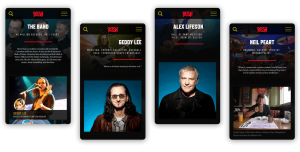 OH, WHAT A FEELIN’
One of Canada’s most successful musical acts, Rush’s unique sound is described as “bombastic” on Sounds Like Toronto, with strong guitar riffs and a jazz virtuosity. As has Heritage Toronto, the band itself has worked with Plank Multimedia on its own website and mobile apps, pictured here.

And the long list of individuals involved in recreating the sounds of the city is also impressive and informative: of course, many musicians gave their time for the project in interviews and clips, such as Archie Alleyne, Michie Mee and Dave Bidini of The Rheostatics. Other folks contributed rarely seen clips, images and photos from their collections, such as The Parachute Club’s Lorraine Segato and members of Blue Rodeo. 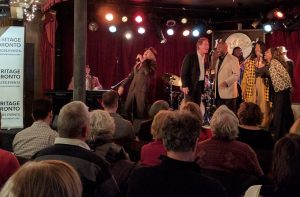 TAKE A WALK ALONG YONGE ST.
Top musicians perform at the Yonge Street Loves Music / Heritage Toronto plaque presentation, held at the Hard Rock Cafe, December 12, 2016.
It’s one of several events staged to celebrate and commemorate the musical history of Toronto, much of which played out in the bars and clubs found along on Yonge Street.
Plaques and even giant wall murals mark many historic locations in the downtown core that resonate with musical significance.
Image courtesy of Downtown Yonge BIA.

Campbell, an Assistant Professor at the University of Toronto Scarborough, is the founder and curator of the Northside Hip Hop Archive, itself an online digital collection but one focused on Canadian hip hop history and culture.

Jennings has written several books charting earlier eras of Canadian pop and rock music, including Before the Gold Rush (leading to the CBC-TV documentary Shakin’ All Over, and then three sequels covering the 1970s, ’80s and ’90s in Canadian music: This Beat Goes On, Rise Up and Life is a Highway). Most recently, Jennings wrote a biography of Canadian folk legend Gordon Lightfoot. 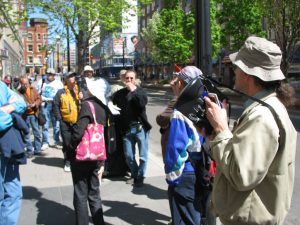 JENNINGS, HERITAGE TORONTO WALK THE WALK
The new digital experience Sounds Like Toronto is not the first collaboration between musical historian Nick Jennings and Heritage Toronto.
During better times, he leads walking tours of the places most associated with Toronto’s musical history, including a dedicated walk down Yonge Street, where so many important clubs and music venues were located.
He also leads a tour of Yorkville Avenue, where a generation found itself and a new musical direction.
Jennings’s informative talks are punctuated by music clips (that’s Nick in the middle of the photo above, holding a microphone. This article’s author stands in the foreground right, holding an iPod and portable sound system) and are a popular component of Heritage Toronto’s Walking Tours program.

The new online Sounds Like Toronto digital experience is divided into four narrative themes or sections.

Each uses text and multimedia elements:

Interestingly, even more than than a walk or a boogie down memory lane, the multimedia content at Sounds Like Toronto has been structured into nine separate school lesson plans, designed for grades 10 to 12, that can be used in history, music, English and social studies classes.

This brings to the solid entertainment value of the project a more serious side, as Allison Bain, Executive Director of Heritage Toronto, described:

“The social justice movements of the past 65 years in Toronto have a soundtrack”, she said when the project was launched. “Sounds Like Toronto features artists whose music provides messages of hope and healing, calls to resist and for social change.” 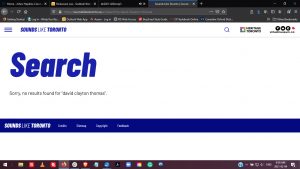 OH, THOSE *BEEPIN* CANADIANS!!
Talk about fostering action and calling for change!
Fans of the history of Canadian music know that powerful political and social change was charted in a hit record called Brain Washed.
They also know the song was censored!
David Clayton-Thomas helped write and then belt out the vocals on this scorching and controversial ’60s hit. He would go on to achieve enormous success as lead singer for the American band Blood, Sweat & Tears, but his roots are in Toronto, with The Shays and The Bossmen.
Recorded in Toronto and released on Roman Records, the label run by top Toronto radio DJ Duff Roman, Brain Washed features what one listener described as “a bass riff that could kill a man”.
It also has a fantastic piano break that I think can bring the dead back to life!
But most importantly, it features a brief, barely one-second long *BEEP*, a sound effect overdub that apparently obliterates the word “damn” (rhyming with the word “Vietnam”, a popular topic in the ’60s).
So this hit, reaching #11 in Canada, must be one of the most popular tunes ever (if not the only one) to be censored at the source!
Sadly, a quick search of the Sounds Like Toronto site did not come up with any reference to David Clayton-Thomas, but you can learn more about him in his autobiography, Blood, Sweat and Tears, published in 2010. 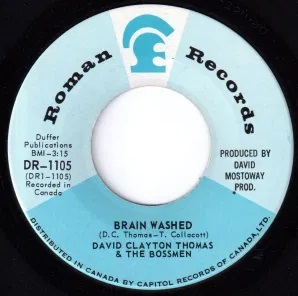 “Now it pours from my papers
from my radio
telling me what to do and which way to go ….
I finally found my voice
and I began to shout
I got to got to tell you what it’s all about:
We’ve been……..”*
*BRAIN WASHED
D.C. Thomas and T. Collacott

Valentine’s Day Tech Gift Ideas For Your Loved One