New movies, books and podcasts are tackling the many thorny issues related to personal privacy, data protection, democratic resiliency, and social stability in the online world. With titles like How to Fix the Internet, or The Internet is Not the Answer, or other titles not quite as family-friendly, it is clear that many observers are more than worried about online activity by governments and state military agencies, if not businesses and individuals and criminal organizations.

But there are also prescriptive remedies being proposed in these titles. There is a path open to us for reclaiming the initial promise and potential offered by the Internet and its many offspring. We can reconfigure the current platforms to our advantage. We can re-imagine how technology can fit into a civil society and help secure a better human condition.

Filmmaker Laura Poitras is the 2015 Academy Award Winner for Best Documentary Feature for Citizenfour, which introduced the world to Ed Snowden, the whistle-blowing former CIA employee and contractor who himself introduced the world to the full reach and scope of the global surveillance system operating on the ‘Net, and the roles governments, technologies and corporations have in that system.

At times, this movie has the feel of an action adventure flick; tense and tight. No easy trick, particularly when we basically know how the story turns out. But the documentary manages to convey “an aesthetic of intimacy in an age of mass surveillance” by bringing its characters to life.

Citizenfour is part of Poitras’s 9/11 Trilogy, with earlier feature films My Country, My Country and The Oath. Even some of her short films, like The Program, and PRISM Whistleblower, describe the growing surveillance state that was enlarged by fears triggered by the 9/11 attacks. Her work gives meaning and expression to the efforts that people in many countries take in an awkward trade-off between privacy, security and safety.

Interestingly, you can still find meaningful digital traces of an art exhibition that Poitras staged at the Whitney Museum in New York, just after Citizenfour landed, in which issues of privacy and security were also explored.

Called Laura Poitras: Astro Noise, the 2016 exhibition included three days of talks and events expanding on the ideas she explores in her work. Journalists and activists held a Cryptoparty, there were tutorials given about encryption tools like TAILS, and various participants described the role of surveillance in their own lives while describing the work that needs to be done to protect all our privacy.

We are ‘Social’ Animals

In a more recent film, The Social Dilemma, the rise of social media is highlighted as a costly, damaging influence on society today. 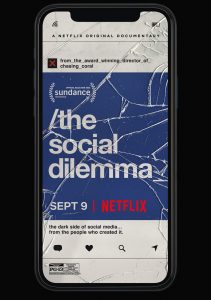 The Social Dilemma portrays the rise of social media as a costly, damaging influence on society today. Netflix press image.

This 2020 Netflix docudrama goes into some depth about social media’s development and how it is designed to nurture “an addiction” among its “users” for financial gain and data mining.

Director Jeff Orlowski has incorporated interviews with former employees and executives from top tech and social media companies, including Apple, Facebook, and Google, interspersing them with fictional settings and characters. Some say that social media and big tech have brought a positive impact to our world, but it is also stated rather plainly that unforeseen and dangerous social, political, and cultural consequences have also arrived.

That film’s subject matter has been thoroughly explored in a non-fictional fashion by Shoshana Zuboff in her book, The Age of Surveillance Capitalism: The Fight for a Human Future at the New Frontier of Power. It is a disturbing read. As one experienced technology reporter put it, “Even those who’ve tracked technology will be chilled to their core by Zuboff’s new book…” and her convincing if strident arguments that the use of technology by surveillance capitalists undermines our autonomy — and our democracy. 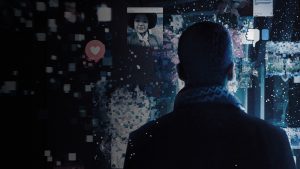 The Great Hack is a documentary about the rise and fall of Cambridge Analytica, the British consulting company that, among other things, is said to have fed the Trump propaganda machine. Netflix press image.

A similar point is made in a 2019 documentary that focuses on one specific tale of surveillance, data collection and democracy gone amuck.

It’s The Great Hack, and it’s all about the somewhat complex and convoluted Facebook–Cambridge Analytica data scandal, one that affected several countries (Canada included) if not millions and millions of people.

Directed and produced by Jehane Noujaim and Karim Amer (both are previous Academy Award nominees), the film follows Professor David Carroll, who had heard about the enormous amount of data collected by Cambridge Analytica, and wanted to reclaim what was his. Investigations led to further concerns about the possible use of that data to affect elections the U.S. and the Brexit vote in the U.K.

Carroll would go on to file a complaint with the Information Commissioner’s Office in the UK over the data scandal; both companies (or their parent firms) were fined as a result.

Nevertheless, the story really continues to this day with many unanswered questions still hanging, so the film also highlights the important on-going work of British investigative journalist Carole Cadwalladr.

A title that presents a somewhat more comforting and reassuring story is How to Fix the Internet, a series of six podcasts from the Electronic Frontier Foundation looking at how current tech policy isn’t working well for us, and how we can all work towards a better online environment. 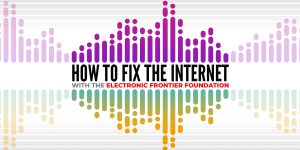 How to Fix the Internet is a series of six podcasts from the Electronic Frontier Foundation.

Hosted by EFF’s Executive Director Cindy Cohn and the Director of Strategy, Danny O’Brien, the podcast series presents some deep technical details and case law examples (with an understandable U.S.-focus) to help explore rights issues and topics in the digital domain.

More than a good listen, the EFF podcast page provides tons of good resources, including key opinions in the cases discussed, legal briefs filed by EFF, a list of books discussed, speaker biographies and a full transcript of every episode.

Towards Digital Enlightenment is a printed collection of prescriptive writings with the sub-title, Essays on the Dark and Light Sides of the Digital Revolution.

Edited by Dirk Helbing, and kickstarted by an article he wrote in 2017, the essays describe the powerful business forces that profit from what we are told are creative disruptions brought about by cool tech tools like social media, big data and artificial intelligence.

However, the real issue is whether democracy, such as we know it, can survive Big Data and Artificial Intelligence. We have long entered a world rife with new kinds of behavioral manipulation. Those companies end up with tons of data about us. Data equate to power, power that can manipulate our behaviour, power that is unlikely to not be misused at some point in time. 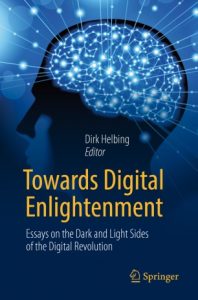 Towards Digital Enlightenment is a collection of prescriptive writings with the sub-title, Essays on the Dark and Light Sides of the Digital Revolution. Springer press image.

Helbing and his contributors propose some general and specific steps to counter such developments, all of which are worth exploring in greater detail:

• a democratic framework for the use of powerful cyber-infrastructures;

• scientific evaluation use by interdisciplinary teams with multiple perspectives;

• tech for good and ethical use that incorporates human rights and human dignity;

• openness and transparency ‘under the hood’;

Somewhat ironically, in a call for online comments and responses from readers about this collection of insightful essays, the publisher notes: “If you would like to comment, please visit our Facebook page.”

Homegrown Remedies for a Global Malady

Which is one reason I like the information, ideas and insights presented in another series of podcasts, this one from the CBC: I don’t have to use any private company or log onto any commercially operated social media site in order to access this content. Which is good: I have (we have) at least partially paid for this content already, through our taxes, so any other ‘payment’ seems inappropriate at best.

The series is called Reset: Reclaiming the Internet for Civil Society; it’s based on a book with the same title, by Ron Diebert.

Deibert is the founder and director of Citizen Lab, a research centre at the University of Toronto, where he and his team study technology, surveillance and censorship. In six podcast episodes, he delivers his 2020 Massey Lectures, focused on the societal impact of the Internet and social media. 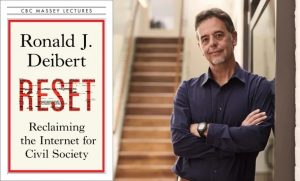 Ron Diebert delivers the podcast series called Reset: Reclaiming the Internet for Civil Society; it’s based on his book of the same title. House of Anansi Press image.

While his descriptions of the “dire consequences to living in an always-on, hyper-connected digital society” may seem bleak at times (they are supposed to be: Diebert itemizes not just personal or social digital challenges to overcome, but political, economic and environmental ones, too).

If civil society is to reclaim the Internet, and Diebert says it is crucial for us to do so, we must hit the reset button. He outlines specific steps to mitigate the harms of social media and ways to rebuild a viable communications ecosystem.

As frightening as the situation may be to some, to others there is still time for remediation.

Time for a reset. A rebuild. A reboot.