Yes, there’s an app for them – a new smartphone app tells just how spicy that pepper really is. It may help you not burn your taste buds; it may also help us all get better solar power! 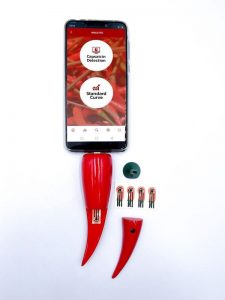 The new Chilica-pod application and chili-shaped gadget were developed to measure something called capsaicin; that’s the chemical compound that gives peppers their heat – the more capsaicin, the hotter a pepper tastes.

Or the more it stings – ‘jalapeno hand’ is a real thing: if you get the capsaicin compound from a jalopena pepper on your hands, or then touch your face, it can hurt. That’s capsaicin, triggering your body’s pain receptors.

The spicy stuff can trigger other reactions, too.

By dripping some pepper juice onto the Chilica-pod sensor and then plugging the device into a smartphone, even low levels of capsaicin can be detected, described researcher Warakorn Limbut of Prince of Songkla University in Thailand.

The device was initially developed to test fresh peppers or cooked meals made with them. The idea was to help people with an allergy avoid the compound, or to let farmers test harvested peppers to better indicate their spiciness.

But there’s another reason to test chili peppers – solar power!

Scientists in China and Sweden have found that a pinch of capsaicin could be the key ingredient for a more stable and efficient kind of solar cell.

Solar cells, especially those called perovskite solar cells, are able to convert sunlight into electricity very efficiently. And, it turns out, they do so even better with pepper. 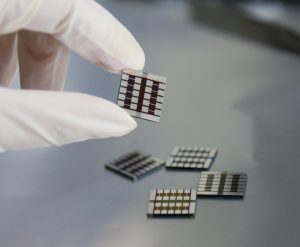 Research published in the journal Joule shows that sprinkling capsaicin into a perovskite precursor during the manufacturing process leads to a greater abundance of current-conducting electrons on the surface of a semiconductor. The pepper-ized platform shows “excellent potential” in the words of the researchers.

Of course, some say the pepper problem here in Canada is the growing season – especially if we want peppers to fuel all our electricity needs!

But technology has an answer for that, too – a Canadian company says it’s the first to harvest peppers during the winter, thanks to light-emitting diodes, or LEDs.

Red, yellow and orange commercial grade peppers, planted in October, were harvested in December, then shipped to grocery stores. Allegro Acres says 90 percent of the peppers from its first harvest were extra-large. No word yet on how strong the capsaicin is, but these greenhouses will never take a day off.

Sollum uses its patented, programmable smart lighting technology (dubbed the SUN as a Service platform) to create, control and modulate the full spectrum of the sun’s natural light. As a result, the company describes, its LED systems can reproduce southern Australia’s light cycle just as they can the light in northern France.

That should let tech-enabled farmers grow a fruit or a vegetable regardless of its native climate and the location of the greenhouse.

Or the desired spicy capsaicin count.

Agri-Food Canada and Sustainable Development Technology Canada (SDTC) are working to expand agricultural output in Canada, whether the crop is indoor or outdoors. Supplied image.

The Latest Premium Smartphones You Can Get in Canada