First responder teams in Canada and around the world are encouraging people to download a free emergency location app that makes use of a human-friendly way to specify precise destinations or locales where help is needed: words.

The system uses just three little words to identify very specific locations anywhere on the planet. Called what3words, developers of the technology have mapped out the whole world into a grid of 10-foot squares. Each square is identified by a unique combination of three random words: a what3words address. 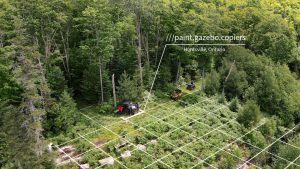 There are 16-digit GPS coordinates to describe any location, yet words can be easier to remember, quicker to say on the phone or keystroke into a digital device or navigation system. Image provided by what3words.

For example ///lashes.candlelit.earned indicates the main pier at the Clear Lake Marina, in Manitoba’s Riding Mountain National Park.  ///exposes.grapes.brushing indicates a spot out front of my place. Yes, there is a 16-digit GPS coordinate to describe basically the same location, but words can be easier to remember, quicker to say on the phone or keystroke into a digital device or navigation system.

A what3words address and its very precise corresponding location can be easily shared with other people (i.e., https://w3w.co/exposes.grapes.brushing), or other online platforms and connected machines such as ride-hailing apps or ecommerce checkouts.

Emergency services are concerned as much about outdoor activities, and the fact first responders must often deal with huge spikes in emergency service requests over holidays and long weekends, when people understandably want to get out and about. As many as seventy per cent of Canadian emergency services control rooms report a spike in calls at such times, according to a voluntary survey of such services.

what3words is available to more than 40 emergency communication centres across Canada, with a presence in eight provinces and two territories. The technology is available in 50 languages, including Canadian French. The app is free to download for both iOS and Android devices, and works offline, so it’s usable in areas with unreliable data connections, such as hiking trails and campsites. The app can also be used via the online map at what3words.com.

The system does not store or track users’ location data, and there are no advertisements on the app or map. Developers say they have optimized the app for voice input and built-in error prevention to immediately identify and correct input mistakes.

It’s been available on the Canadian market for nearly five years, and to date the company reports a 97 per cent year-on-year growth in partners. Manufacturers such as Mercedes-Benz, Mitsubishi, Ford and Triumph Motorcycles have integrated the three-word address location application in their vehicles’ navigation systems, and travel and tourism companies use what3words to mark and highlight accessible entrances, beauty spots and hiking trails.

But it is emergency control centre staff who are on the front lines of using the app.

“Utilizing what3words’ innovative location technology has assisted and enabled Communications Operators to work with callers to know exactly where to dispatch resources when every second counts,” commented Tracy Finn, an ENP Coordinator, with 9-1-1 Emergency Voice Services of the Toronto Police Service.

“As the largest city in Canada, Toronto is a bustling city that boasts beautiful greenspaces, waterfront, beaches and tourist attractions. In areas without clearly marked addresses like the waterfront, or hiking trails within greenspaces, it can be challenging for the 9-1-1 Communications Centre to locate a caller in an emergency to dispatch responders. Help us, help you, know exactly where you are,” she continued. 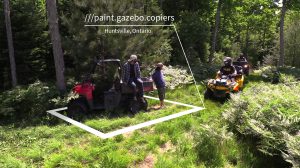 Emergency services and first responders must often deal with huge spikes in emergency service requests over holidays and long weekends, when people understandably want to get out and about. Image provided by what3words.

It’s not just in the largest cities where emergency responses and what3words can have a life-saving impact: it was in the small town of Turkey Point, Ontario, on the north shore of Lake Erie, that earlier this year an injured cyclist needed medical attention.

A passer-by notified 911, but only with vague descriptions of the locale. But dispatch was able to send them a w3w link, they read the three little words back to the call centre, and emergency responders were deployed.

“The victim’s location was relayed to emergency crews, who swiftly located the victim, provided emergency care and rapid transportation to the hospital,” assistant fire chief James Robertson told the local paper at the time. “Without the app, the search for this injured person may have taken significantly longer and the victim’s condition could have deteriorated.”

“Across the globe, our technology has proven to be a valuable tool, both for emergency services and members of the public when you need to know exactly where. It’s useful for organizing meet-ups in parks and on hiking trails and beaches, but also provides the peace of mind of knowing that you and your family will always be able to tell emergency services exactly where help is needed. We’re proud to have been adopted by so many Emergency Service partners across Canada and look forward to continuing our expansion in the region at pace,” describes Chris Sheldrick, company CEO and co-founder.

Launched in London in 2013, what3words now works with a team of over 100 people in offices around the world. It cites over $150 million (CDN) in capital investment from partners like Intel, Deutsche Bahn, Subaru and the Sony Investment Fund, among others.

Developers of the what3words technology have mapped out the whole world into a grid of 10-foot squares, identified by a unique combination of three random words. Image provided by what3words.

So three words could be a life-saver. In other contexts, three little words could be a love-maker. They were at least musically established (by the likes of Bing Crosby, Peggy Lee, and John Coltrane!) many many years ago. And while we would all love to hear ‘I love you’ whispered in our ear, the phrase does not seem to be the best way to locate people. Closest to ‘I love you’ in w3w speak seems to be ‘into love tofu’, somewhere near Carlsbad, New Mexico.

6 Important Features to Look For In True Wireless Earbuds