New online tours and digital exploration experiences offer a way to keep alive the sense of discovery even when the group travel situation is not ideal.

Be it an unexpected wild winter weekend or the on-going attempts at mitigating the corona virus pandemic, it can be a challenge to walk-about in Toronto these days.

But some new digital tours, history podcasts, supplemental content and a host of other online initiatives make exploring the city and the surrounding area much easier from the desktop. Many of these online portals are not what you would normally call interactive or immersive websites, from a features or functionality point of view, but the sites are loaded with content so the curious mind – and companion mouse – will find reward.

For example, an online tour of Yonge Street promises a chance to learn about a major urban artery which began life as a simple dirt trail back in the 1700s, growing to become known as “the world’s longest street.” 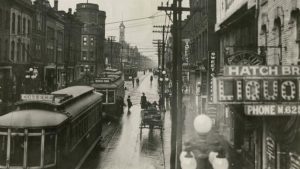 A virtual walking tour of Toronto was developed by Emerging Historian Stephen Ficalora, with the support of the Downtown Yonge BIA and the Ontario Association of Architects. © Heritage Toronto 2022.

Launched by the charitable municipal agency Heritage Toronto late last year, the Architecture of a Neighbourhood: Downtown Yonge Street tour explores the structural past and present along Toronto’s main street using simple scrollable text and historic images, describing it as “where the city comes to shop, to meet, and to celebrate.”

A table of contents and a static map help guide visitors through the online content, which is all about the downtown core and points of interest there, either on or adjacent to Yonge St. The tour was developed by Emerging Historian Stephen Ficalora, with the support of the Downtown Yonge BIA and the Ontario Association of Architects.

Had the tour been developed several years ago, it might have included a citation from the Guinness World Book of Records, listing Yonge as the longest street in the world!

But it just ain’t so!

There was a big inlay sidewalk map at Yonge and Dundas for a while, also one at the foot of Yonge St., testifying to the celebrated if not exaggerated strip of asphalt. But it is urban myth. The journey from the bottom of Yonge St. to the top is not contiguous; in fact, it depends on other roads and highways to get from here to there (a journey of almost 2,000 km). It is not always named Yonge, and so Guinness dropped the prideful moniker in 1999. 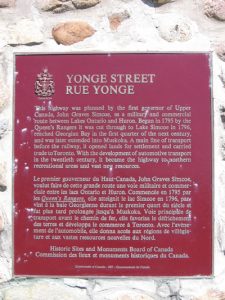 The origins of Yonge St are described in a plaque from the Historic Sites and Monuments Board of Canada. © Parks Canada / Parcs Canada, 2006.

No longer called “the world’s longest street”, it is now dubbed one of the province’s “least travelled primary highways”.  Scott Steeves’ website, the amazingly comprehensive asphaltplanet.ca, has a text-, map- and image-laden tour of King’s Highway 11, documenting some of the road’s less-well travelled sections outside Toronto.

So, the length was at dispute, and it seems, so too the age. Variously described as 200, 225 years, even older by some, Yonge St. is certainly anything but young.

As it has aged, Yonge St. has seen its share of firsts: Sources say the first motorized transport truck in Canada drove on Yonge, may have even been built on Yonge. It probably carried pork products, coming from what would eventually be one of the largest such plants in North America. Not for nothing Toronto is called Hogtown.

Yonge St. could have brought the nickname Movietown, too: At its intersection with Adelaide St. E. today stands a high-rise tower of glass and steel. Back in 1896, it was the site of Robertson’s Musee, a small magic and curio shop at first. But when it added a new invention by Thomas Edison called the Vitascope, projecting moving images to startled patrons for the first time, the magic of cinema was deeply felt. “It baffles analysis…” states the historical plaque marking the occasion. 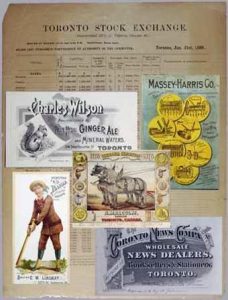 Posters and advertisements show a range of commercial activity in Toronto, 1878-95 (City of Toronto Culture image).

(Not part of the digital tours of Yonge St. but one that continues the learning journey is an upcoming book which will bring much analysis to the subject of Yonge St. as a cultural force: In The Heart of Toronto, historian Daniel Ross refers to Yonge as both “an embarrassing relic” and “a laboratory for modern urbanism”.  It’s due out in April.)

Until then, you could fill your time with nearly an hour’s worth of packaged audio that leads you on a tour of historic and geographic points of interest in Toronto. With several individual stops along the way, each one illustrated, the Creating Toronto: Story of a City experience is a nice virtual option to the typically guided group tours the agency usually conducts.

Heritage Toronto has now added two more virtual tours that allow you to discover more about the city’s unique characters, neighbourhoods and cultural impacts over the years: St. James Town and the Junction Triangle are profiled in online collections of imagery, text and maps.

Most Talked About Innovations in 2022 So Far

Is Funding for Data Privacy Projects Enough to Make a Difference?