A small piece of Canadian technology − barely the size of a deck of playing cards – is playing a big role in uncovering the causes and effects of global climate change.

The small but sophisticated telematics tracking device is part of a fleet management platform developed for the interdisciplinary scientific organization British Antarctic Survey (BAS), and its fleet of vehicles now on a research expedition in the Antarctic.

The fleet includes snowmobiles, snow groomers, tractors – and a state-of-the-art polar research ship, the RRS Sir David Attenborough, to which a device has been fitted to help plan, track and manage the ship’s voyage.

As part of that tracking, anyone around the world can monitor the ship’s location and progress via its time-lapse webcam on its polar research expedition to Antarctica. (At this posting, the ship is within sight of Bird Island, one of the world’s richest wildlife sites.)

Oakville, ON-based telematics solutions provider Geotab Inc. worked with BAS scientists to provide a tailored connectivity platform for the expedition using its compact plug-in GO9 vehicle information data devices, modified for the project and housed in a custom-built mounting box to protect it from extreme temperatures and conditions.

Used in millions of vehicles every day, the GO9 device from Oakville, ON-based Geotab Inc. includes a variety of real-time telematics functions for Antarctic research expeditions, too.

In partnership with numerous national and international academic and technology collaborators, BAS science and support staff (based in the U.K., Antarctica and the Arctic) deliver research that uses the Polar Regions to advance understanding and maintenance of Earth as a sustainable planet.

Often working hundreds if not thousands of miles away from the main research stations, Antarctic researchers depend on their communications systems to ensure safety and to get the most sustainable use of fleet machinery during their research. 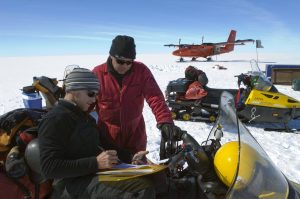 The work of the BAS team helps governments and businesses set policies that shape their environmental commitments for the future, forming the groundwork for effective strategies to combat climate change and mitigate the climate crisis. Here, a snowmobile team prepares to depart Sky-Blu Field Station after resupply from a Twin Otter aircraft (which, too, has connections to Canadian technology). (Photo: Business Wire)

BAS scientists and support teams have in the past relied on a high frequency (HF) radio in emergencies. Every time a team stopped, members would have to erect an antenna rig to maintain communication with research stations – not a fun or easy task in sub-zero temperatures.

With research stations across the Antarctic and research teams that travel on so-called “deep-field expeditions” for weeks at a time, there are significant connectivity challenges in areas without any kind of cell infrastructure.

GO9 data can be optionally transmitted as LTE, satellite or other compatible comms platforms. Once merged into the BAS location mapping system and fleet management software from Geotab, device data can be used to track every single vehicle journey, time of departure and estimated arrival, real-time latitude and longitude coordinates, stops made along the way and more.

In worse-case scenarios, the monitoring tool also functions as a distress beacon via the simple push of a button. 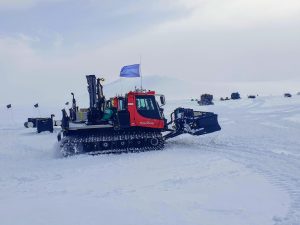 Flying the Geotab flag, a PistenBully traverse team returns to Halley VI Station on the Brunt Ice Shelf. At the end of each trip, the snow groomer machines undergo routine maintenance and repairs at Halley’s workshop before being prepped and resupplied for the next adventure. (Photo: Business Wire)

“It’s our primary goal to make working remotely, deep-field in the Antarctic safer, more efficient and carbon accountable going forward,” described Ben Norrish, Head of Vehicle Engineering at BAS. “Using this technology allows us to achieve all three. Having the ability to live track teams on the ice is a huge asset to route planning and safety of the teams with an added benefit of peace of mind to each person on the ice knowing that if they get into trouble, a search and rescue can be deployed fast and accurately to save lives.” 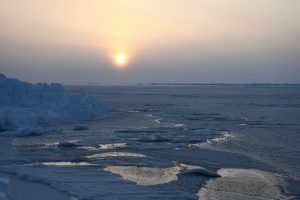 Arctic sea ice is in decline. International research partners, including from the Universities of Calgary and Victoria, are part of the BAS CRiceS project, or Climate relevant interactions and feedbacks, investigating the substantial decrease of sea ice in both Arctic and the Antarctic, and the impact on polar and global climate system as well as society globally. Their work extends through 2025. Photo credit: Markus Frey @ BAS.

A ‘sun dog’ appears at the Ceremonial South Pole, surrounded by the flags of the member countries to the Antarctic Treaty.  The atmospheric optical phenomenon is also known as a mock sun. (Photo: Business Wire)