Internet service providers and technology developers who are developing new broadband services – and senior citizens who may need attention at home – are sensing that Wi-Fi is the next big thing.

Although Wi-Fi was introduced to consumers more than 20 years ago, Wi-Fi Sensing is a new application for the radio transmission protocol, and it is powered by artificial intelligence. It’s one of technology’s latest health and wellness tools.

In their transmission, Wi-Fi radio waves can ‘sense’ objects and obstructions, be they static or in motion. Like waves of water hitting an object, radio waves are distorted and reflected by the objects they encounter.

By applying artificial intelligence to read and interpret those sensed Wi-Fi signals and radio wave patterns, an object’s – or person’s – shape, mass and movement can be detected and interpreted in real time. The speed or gait with which they walk can be monitored. Even subtle motion, like breathing, can be detected. Of course, a lack of motion can be detected, too. Sensing systems can be trained to identify if a person suddenly shifts from standing to laying on the floor (and it triggers an alert to local caregivers or family members).

By applying artificial intelligence to read and interpret sensed Wi-Fi signals and radio wave patterns, a person’s shape, mass and movement can be detected and interpreted in real time. The speed or gait with which they walk can be monitored. Image: Cognitive Systems Corp.

Many senior citizens today want the independence of home living and caring for themselves, whenever possible and practical. But some elders may need some extra care and attention while at home. Wi-Fi Sensing can help.

Service providers and tech developers are now designing future broadband services with Wi-Fi empowered home-based health care solutions in mind, using Wi-Fi Sensing and data analytics to build an ecosystem of care, one in which advanced technology is used to support people in an individual context, while they are at home, when they are alone. 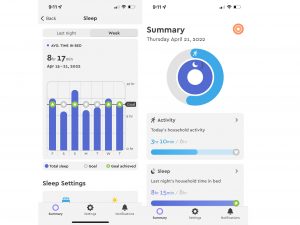 When needed or necessary, Wi-Fi sensing systems can send out customizable alerts to family members or other caregivers across iOS or Android app interfaces. Image: Cognitive Systems.

Canadian companies have embraced the new opportunities to deliver these ‘tele-care’ or ‘remote care’ services, and they have raised millions of dollars in investment funding to develop and deliver them.

Founded in 2015, Montreal-based Aerial is creating a Wi-Fi motion sensor detection system that it says, when combined with cloud-based machine learning and analytics, can “add context and meaning to motion, allowing the recognition of presence, motion, activity and identity.”

Aerial software can be embedded in virtually any Wi-Fi network equipment or device, the company describes, and does not require wearables or other sensors to work. Aerial’s technology was developed by company CTO Michel Allegue, based on IP that originated in part at McGill University.

Another Canadian start-up, Waterloo, ON’s Cognitive Systems, had launched a Wi-Fi based Home Security system, but it required special hardware and installation. Its newest iteration, Caregiver Aware, combines existing Wi-Fi infrastructure with AI-driven pattern recognition to monitor activity in the home and compare that to typical daily motion patterns. It can track the average amount of sleep a person gets or if weekly activity levels are suddenly decreasing. When needed or necessary, such systems send out customizable alerts to family members or other caregivers across iOS or Android app interfaces.

Cognitive Systems also licenses its Wi-Fi Motion to chipset manufacturers for use in other routers and gateways, and the company is working with Internet service providers to trial the service.

“Our goal with this product is to create a bridge for service providers to build a care-focused ecosystem using data analytics,” said Taj Manku, company co-founder and CEO, “which will be a game-changing step in shaping future broadband services.” 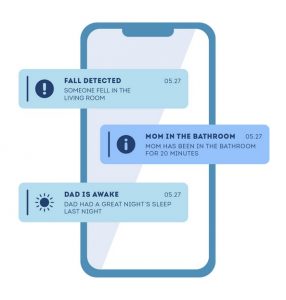 Wi-Fi sensing capabilities can be embedded in virtually any Wi-Fi network equipment or device. Image: Aerial.

It seems the market for advanced health care / home care technologies will only grow in the coming years as future broadband services roll-out. According to a 2020 PwC Health Research Institute consumer poll, 85 per cent of respondents want to make use of health care solutions at home, including remote monitoring. 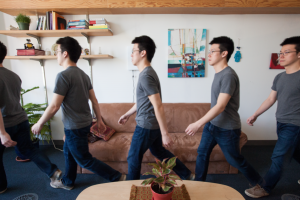 Academics, researchers and technologists are tweaking the motion detection capabilities of Wi-Fi by analyzing wireless signals and their reflections off encountered surroundings, such as a person’s body. Walking – stride length and gait speed – is easily detected. But algorithms can distinguish walking from other movements, such as cleaning the kitchen or brushing one’s teeth. A range of behaviours can be identified, including breathing, falling, even specific emotions, simply by analyzing the wireless signals that get reflected off people’s bodies. Wi-Fi can also be used to estimate the number of people inside a room from the outside. Image: MIT.

It’s Pride Month and You Can Celebrate With Tech