Every year in September, Apple holds its annual event where fans have come to expect new products in the mobile space, including iPhones, Apple Watches, AirPods, and more. And this year, the company did not disappoint.

While the feature upgrades, in some respects, don’t represent massive leaps in hardware or software, in some cases, the options available might have Apple fans salivating at the thought of upgrading.

With Crash Detection, the phone (or watch) can detect a serious car crash. If you do not respond within 10 seconds, it will automatically contact emergency services and send details of your location. Emergency SOS, meanwhile, uses satellites to help you contact others if you’re in trouble, even without a cellular or Wi-Fi signal. It leverages Apple specialists working in a centre who can direct you towards a satellite them get help on your behalf. Emergency SOS won’t be available until November and it is a subscription based service, but the phones will come with a two-year trial with activation.

What’s the difference among the four phones? 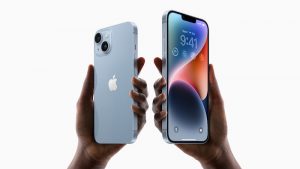 The iPhone 14 and 14 Plus have 6.1 and 6.7-inch screens, respectively, along with new main and front TrueDepth cameras and ultra-wide camera. They are both made of aerospace aluminum, have a Super Retina XDR display with OLED technology and 1,200 nits of brightness, and are powered by the A15 Bionic chip. You’ll get further improvements to video capture with the new Action mode that helps reduce shakes, motion, and vibrations along with improvements to low-light photos. Cinematic mode is now available in 4K at 30 frames-per-second (fps) and 24 fps. Both phones run on the new iOS 16, which will be available as a free software update starting September 12.

The iPhone 14 comes in midnight, blue, starlight, purple, and (PRODUCT)RED in 128GB, 256GB, and 512GB storage capacities and is available for pre-order starting September 9, with official availability on September 16. It will cost $1,099 before trade-in. The iPhone 14 Plus, meanwhile, will come in the same colours and sell for $1,249 once it’s available on October 7. Both phones will come with three months of access to Apple Arcade.

The higher-end versions of the iPhone are the new iPhone 14 Pro and iPhone 14 Pro Max, which are both powered by the A16 Bionic chip. The iPhone 14 Pro is the first iPhone to include a 48MP main camera with quad-pixel sensor along with the Photonic Engine.

These two phones also have 6.1- and 6.7-inch Super Retina XDR screens with ProMotion, respectively, and sport a new Lock Screen that shows things like time, widgets, and live activities. You’ll get twice the brightness of the iPhone 13 Pro at up to 2,000 nits of brightness.

The defining feature is Dynamic Island, which adapts the view in real-time to show important alerts, notifications, and activities. Tap and hold to get easier access to controls while background activities like Maps, Music, and even a timer, are visible and interactive. You can also access iOS 16 apps that work with Dynamic Island, like sports scores and ride sharing updates.

The cameras are improved, too, with a new 12MP ultra-wide camera, telephoto camera with 3x optical zoom, and new front TrueDepth camera. 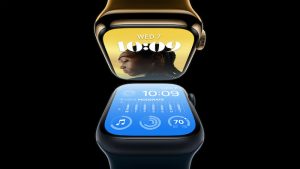 The most notable upgrades with the Apple Watch Series 8 include a new Low Power Mode that extends battery life from 18 hours to 36 hours when you disable or limit certain sensors temporarily, new customizable watch faces via watchOS 9, an enhanced workout app to capture more precise data and running metrics, sleep stages, a new Afib History feature, and a new Medications app for managing and tracking medications. It also offers access to the Crash Detection feature. The Compass app has also been enhanced in watchOS 9, making it easier to create waypoints or even backtrack your route if you get lost.

Apple Watch Series 8 will be available in aluminum and stainless-steel cases in 41mm and 45mm sizes. Aluminum case colours include starlight, midnight, silver, and (PRODUCT)RED, while the stainless-steel case offers silver, graphite, and gold. Pricing starts at $529. 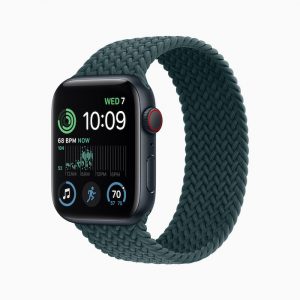 The Apple Watch SE, which starts at $329, has the same dual-core processor and features like Crash Detection and the new Compass app, but comes with a back case made of a nylon composite material. The lightweight, entry-level watch comes in 40mm and 44mm aluminum cases, in midnight, starlight, and silver.

For adventurers and serious athletes, the Apple Watch Ultra, coming September 23, has a rugged aerospace-grade titanium case and flat sapphire front crystal casing so it can be used in extreme environments. This includes temperatures as cold as -20°C to as hot as 55°C as well as under water for activities like scuba diving and wakeboarding. It even has a new depth gauge and can be used as a dive computer.

Battery life has been improved to 36 hours per charge, up to 60 hours using the low-power setting. 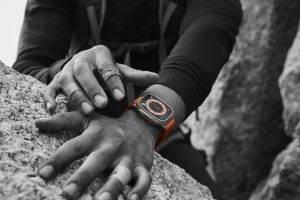 The Apple Watch Ultra can be paired with new band options including Trail Loop for endurance athletes and runners, Alpine Loop for explorers, and Ocean Band for use during extreme water sports. It won’t come cheap, though, selling for $1,099.

All three new Apple Watches, as well as any Apple Watch Series 4 or later new purchase, will come with three months of Apple Fitness+. 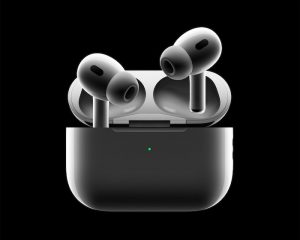 The second-generation version of the Apple AirPods Pro true wireless earbuds is powered by the new H2 chip and offer upgrades to active noise cancellation, canceling twice as much noise, Transparency Mode to reduce loud environmental noise, and a more immersive Spatial Audio experiencing using the TrueDepth camera on a compatible iPhone to create your own personal sound profile.

There’s now touch control capability to adjust volume, change songs, answer a call, and more on the stem of the buds itself through a swipe up or down motion. You’ll also find a new AirPods section in iOS settings for more easily access controls. For those with smaller ears, they come with a new extra-small eartip size along with a built-in skin detect sensor to more accurately detect when you insert and remove them.

The second-generation buds offer up to six hours of battery life per charge with ANC on, and up to 30 hours using the new charging case. Speaking of the case, it’s now sweat- and water-resistant and has a lanyard loop for securing around your neck, to a backpack, or other item for safe-keeping. It can be charged using a MagSafe charger, Qi-certified charging mat, or Lightning cable.

You can also personalize the case for free when ordering online through Apple using your personal Memoji character, animated Memoji, or a curated list of stickers.

Available for pre-order starting September 9 with official availability on September 23, the second-gen AirPods Pro are priced at $329 and come with six months of Apple Music.