From shopping carts to cryptocurrencies, from streaming media to online banking, we Internet consumers consume a lot of electricity. The Internet infrastructure – data centres, telecoms networks, and end user devices – is in fact the world’s seventh largest polluter (if it were on a list of countries) and its usage is growing every year.

Now, growing awareness of the heavy digital footprint left on our planet by the information, communications and technology industry is triggering a zero-carbon revolution. There’s a Net Neutrality movement of another sort, seeking a neutral environmental impact for the Internet. Initiatives aimed at achieving a fossil fuel-free Internet are coming from many sectors, including data centre operators and network systems providers; advertisers, agencies and media companies; as well as public advocacy groups and regulatory bodies.

Acknowledging that an accurate measurement of the overall carbon footprint of our Internet-related activities is difficult and that there’s still a lot of uncertainty about the environmental impact of the digital sector overall (focusing only on carbon consumption and emission misses important environmental factors like water usage, the need for other natural resources and manufacturing materials, product disposal at end-of-life and so on), folks at the Green Web Foundation have released a report calling for education, awareness and fast action across many fronts.

It was more than ten years ago when researchers at the University of California, Berkeley, took on the task of estimating the electricity the Internet requires.

ICSI alums Barath Raghavan and Justin Ma estimated usage between 84 and 143 gigawatts every year, roughly 3.6 to 6.2 per cent of all electricity worldwide. But according to the KTH Royal Institute of Technology in Sweden, now about 10 per cent of the world’s total electricity consumption is used by the Internet. The figure may reach 20 per cent by 2025; 28 per cent by 2030.

That puts the carbon dioxide emissions of data centres alone on par with those of the aviation industry and the particularly dirty habit of discretionary air travel.

Even as so-called “flight shaming” is becoming a more readily recognizable phrase among environmentally-conscious consumers, the energy use of digital technologies could be dubbed “Bitcoin blaming” to call attention to the already very high use by digital media consumers (and their business and industrial support structure), now being made worse by the energy appetite of blockchain technology.

Recognizing that data centres alone consume vast amounts of energy (so the potential reward in reducing their energy consumption was huge), European researchers unveiled a Code of Conduct for Energy Efficiency in Data Centres several years ago, collecting known best practices drawn up by the data centre industry and independent experts to improve the energy efficiency of data centres.

More than 450 data centres have signed on to the Code of Conduct; among them Facebook, which received a Code of Conduct Award for Energy Efficiency in Data Centres in the EU five years ago!

Meanwhile, another code (this one an acronym for the Coalition for Digital Environmental Sustainability) for the green revolution has been unveiled at the United Nations, part of the broader follow-up to the Secretary-General’s Roadmap on Digital Cooperation and its initiatives to advance a healthy future for our digital environmental.

“Advancing technology has always been coupled with significant impacts on the environment,” the UN Secretary General said, recognizing the importance of digital technologies in both causing environmental and accelerating climate action: “[R]ecent advances in technology offer ground-breaking opportunities to monitor and protect the environment, as well as overall planetary health. By harnessing them appropriately, the digital revolution can be steered to combat climate change and advance global sustainability, environmental stewardship and human well-being.”

Yes, there are many contributors to the climate crisis, but streaming media and digital publishing are a surprisingly key driver of carbon consumption.

Every piece of digital content delivered across the Internet passes through several different energy-driven delivery platforms—data centres, web infrastructure, consumer devices and more—each operated by different owners, but together contributing roughly one billion tons of greenhouse gasses per year to overall global emissions.

So much more than the average person is exposed to somewhere between 4,000 and 10,000 messages a day (a number that varies depending on the source) competing for our attention while using our fossil fuels.

“There are four major components for emissions to a web page,” founder and tech entrepreneur Brian O’Kelley explained to Digiday. “There’s the device or browser, like, when the CPU from JavaScript and rendering page, then there’s the energy from data transmission when things are going through 5G or Wi-Fi, the production cost of the content, then there’s the targeting and analytics” which themselves use multiple sources to make their carbon footprint.

Scope3 promotes the value of better viewer attention metrics to use fewer media impressions overall while achieving the same outcomes, bringing sustainability into the equation.

In fact, some say carbon responsibility should be part the media plan in the first place. Some brands tally points for diversity, equity and inclusion in their RFPs to digital media companies when deciding to buy ad buys and sponsored content. So, too, media companies can also include questions about a brand’s carbon footprint and that of each bit of media content published. 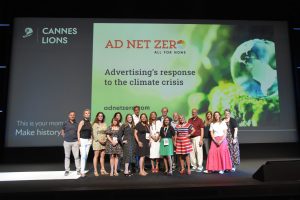 Conversely, what if viewers received a carbon footprint report themselves, right along side their monthly bill or data cap report? Manufacturers, suppliers and agencies are trying to lighten their footprint, consumers and viewers should do the same. 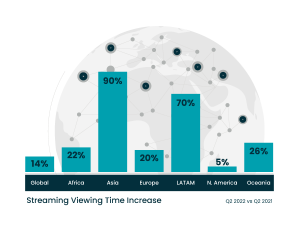 According to the new Conviva State of Streaming Report, media consumption and growth continues.

According to the new Conviva State of Streaming Report (on Q2, 2022), media consumption and growth continues.

Global media stream viewing time was up 14 per cent, the company noted, with Asia and LATAM charting the largest growth at 90 and 70 per cent, respectively. Heavily saturated North America also upped its streaming, about five per cent.

“Digitalization – the use and adoption of digital technologies – is driving massive economic, social and environmental change that can either deepen or close inequalities. The future of humanity and the health of planet Earth will be significantly shaped by this transformation.” – Achim Steiner, Administrator of the United Nations Development Programme and CODES co-champion. Server room image, Wikimedia Commons.