Products, packages and pizzas are delivered to doorsteps and backyards. News reports, movies and commercials are being filmed. Farmland and agricultural productivity is being monitored and enhanced. Buildings, civic infrastructure and construction sites are inspected; medical supplies – even donated organs – delivered; emergency, defence and police activities supported.

The anticipated potential for drones in commercial, industrial and civil applications is sky-high. Canadian UAV image.

We’ll see more drones in the sky as unmanned and autonomous flying becomes a part of our daily lives. The anticipated potential for drones in commercial, industrial and civil applications is, well, sky-high.

Regulatory and reporting requirements for drone operation licenses include the monitoring of where drones fly, how high they fly and the purpose of the flights. Often, one-year BVLOS permits (beyond visual line of sight) are issued by Transport Canada for public safety purposes like monitoring wildfire hotspots.

Transport Canada had worked with four organizations for trials to develop potential BVLOS regulations back in 2019. Two of the trials were by Canada Post and Drone Delivery Canada, looking at the deployment of drones for delivery to Canada’s remote and rural regions — Drone Delivery Canada delivering food and medical services in Moosonee, ON, for example.

Now, some leading Canadian tech companies have been taking on the challenges of urban flight navigation as they conduct licensed and permitted flights over major Canadian metropolises.

Of course, the risk of drones crashing into crowded cities due to imprecise technical data, like GPS signals, spotty LTE/5G connections must be eliminated. And mapping the urban airspace precisely in three dimensions is also key to assessing and implementing how drones can deliver the goods – safely, securely and with privacy in mind. 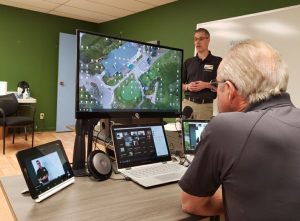 In-Flight Data, an Alberta-based tech company experienced in advanced drone operations, has been testing, training and preparing advanced aerial surveys in Calgary as part of its efforts. In July and August, its flight missions covered an operational area of about 9,000 hectares (or about 22,000 acres), all inside city boundaries and above the heads of its roughly 1.2 million citizens.

Working with advanced operations certified drones and the latest in advanced radar and aerial surveillance technologies, including hardware and software, the highly-trained air flight crew was able to ‘see’ all Calgary air traffic users for more than 30 km in all directions. The company says the purpose of the aerial intelligence gathering was to assess the quality and performance of the entire communications network fabric above an urban centre, including geolocation, cellular, radio and many other comms signals. 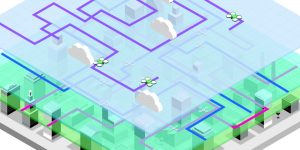 The testing is part of Calgary’s Living Labs program, and participating drone pilots will use air traffic management software from Canadian project partner AirMatrix, a Toronto-based tech start-up. The company builds millimetre-precise skyways in urban and suburban airspace so commercial drone operations can be scaled-up in cities worldwide.

The Calgary deployment will ramp up over 18 months inside an allocated zone within city boundaries to begin logistics and public services drone operations; the goal is to build a live drone ecosystem in Calgary. Said to be the only platform of its kind, AirMatrix provides traffic management capabilities through its drone traffic manager dashboard. There’s a corresponding operator platform sending out accurate, 3-D flight route specifications in real-time to enterprise drones incorporating beyond visual line-of-sight operations.

In collaboration with local drone operators, AirMatrix is also now deploying its operator platform in Waterloo, Ontario. The company says the data it gathers will be anonymized, then shared with Transport Canada to continue development of the standards required for complex drone operations in urban settings nation-wide.

Based on experiences in Calgary and elsewhere, AirMatrix is accelerating its ability to map cities, with plans over the next year to terrestrially and aerially map 100 cities globally and build highways and skyways that enable advanced aerial mobility for drones and other such pilotless aircraft.

To do so safely, it needs the ability to ‘deconflict with other air traffic’, called “Detect and Avoid” (DAA). This is the automation of the human response, the application of technology as an onboard pilot.

Canadian UAVs’ ground-based detection system, Sparrowhawk Radar, scans and detects conflicts in an operational area some 450 square kilometres in size (around a central point). Combined with a computer vision sensor system and advanced algorithmic processing, Sparrowhawk is said to be able to solve DAA issues in more than 90 per cent of Canadian airspace below 400 ft.

Open to Professionals and the Public: Big Data and AI Event Comes to Toronto